While everyone was focused on Ryan Dempster and Zack Greinke at the trade deadline, the Tigers swooped in and acquired Anibal Sanchez (and Omar Infante) from the Marlins for a package of prospects headlined by right-hander Jacob Turner. It’s a pure rental since Sanchez is due to become a free agent after the season, but the still only 28-year-old right-hander is now in position to help Detroit get to the World Series.

A bit of a sabermetric darling for his work last season (3.67 ERA and 3.35 FIP), Sanchez pitched to a 3.74 ERA (3.68 FIP) in a dozen starts for the Tigers following the trade. His strikeout rate predictably dropped (no more whiffing the opposing pitcher twice a game) following the move to the AL, but he finished the season with eight dominant outings (2.15 ERA and ~2.60 FIP) before holding the Athletics to two runs in 6.1 innings in Game Three of the ALDS last week.

I had completely forgotten that the Yankees faced Sanchez this season, but they did see him in his third start following the trade to the Tigers. They obviously hit him pretty hard, including a two-run first inning (run-scoring singles by Eric Chavez and Curtis Granderson) and a three-run homer by Granderson in the third. Nick Swisher ended Sanchez’s night with a single in the fourth. Eleven of he 20 men he faced in the game reached base, which is the exception and not the rule. It’s great they hammered Anibal the only time they faced him this summer, but I wouldn’t assume they have his number, not by any means. Casey McGehee starting that game for cryin’ out loud. 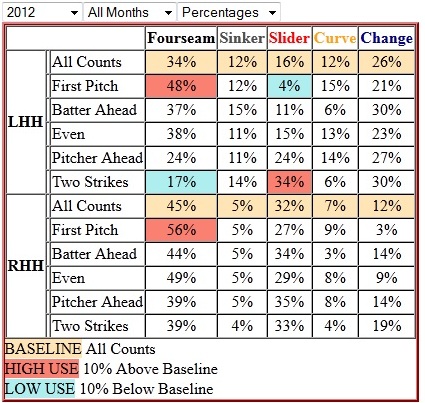 Sanchez uses five pitches regularly and he’s very offspeed heavy, throwing his low-90s four- and two-seamers less than 50% of the time overall. Most of them come on the first pitch as well. Right-handers will see his mid-80s slider more than any of his other secondary pitches while lefties will get the full complement — mid-80s changeup, upper-70s curveball, and slider. There is a little bit of Hiroki Kuroda in Sanchez, meaning he’ll break out any one of his many pitches at any time.

Given how he uses all of pitches against lefties, it’s not a big surprise that Sanchez has a reverse split. BABIP plays a part in that (.331 vs. .292) but it isn’t everything. The strikeout and walk rates hold steady against batters on both sides of the plate, but right-handers really hammered him whenever they did make contact. Not just homers either, he gave up a lot of doubles as well. That slider is his least effective offspeed pitch, hence all that hard contact by righties. I’m not saying the Yankees should trot out as many right-handed hitters as possible, but Russell Martin and Alex Rodriguez (if he plays) could end up playing a major role in Game Two.

Like Game One starter Doug Fister, Sanchez is pretty efficient with his pitches (3.73 pitches per batter faced), so driving up his pitch count in an effort to get to that shaky bullpen won’t be easy. Given how often he’ll throw a first pitch fastball, it might be worth it to jump on him early in the count if Anibal is consistently in the zone. Five of the seven hits he allowed to the Yankees in that August start came within the first three pitches of the at-bat, which might not be a coincidence.