A Quick Lead
Three pitches into the game, the Yankees had the lead. Jacoby Ellsbury dropped a bloop into left field that Ryan Rua misplayed, allowing it to get by him and Ellsbury to advance all the way to third base. It was ruled a double and an error on Rua. Brett Gardner hit a sacrifice fly to center and boom, a quick 1-0 lead. You can’t start a road game much better than that.

The Yankees didn’t stop there though. Baseball’s best first inning offense added two more runs, including one on a Mark Teixeira solo homer to dead center. Two singles (Brian McCann and Chase Headley) sandwiched around a walk (Carlos Beltran) created the third run after the homer. So the inning had a little of everything. A run fueled by an error, another on a homer, and another by stringing together a few singles. The three first inning runs pushed New York’s league leading total to 89, 17 more than any other team.

Sunk Cost
The 3-0 lead was gone five batters into the bottom of the first inning. Two infield singles and a three-run home run by Josh Hamilton did the trick. CC Sabathia almost got out of the jam. Almost. He got Prince Fielder to fly out harmlessly to center and lucked out when Adrian Beltre smashed a line drive right at Headley, and he was able to jump ahead in the count with a first pitch strike to Hamilton. Two balls and a hanging slider followed. Three-run homer. Lead gone.

Sabathia allowed two more home runs in the game though only one was really his fault. Shin-Soo Choo clobbered a 2-0 nothingball for a leadoff home run in the second inning — Sabathia had allowed one homer and three extra-base hits total to left-handed batters this season coming into this game, then allowed two homers to lefties in the span of three batters — and Rua hit an inside-the-park home run in the fourth inning. I’m not sure there is anything more facepalmy in baseball than giving up an inside-the-parker.

The inside-the-park homer was on Ellsbury more than anyone. Rua hit a solid line drive single to center, Ellsbury came in and tried to make a sliding catch, but whiffed and let the ball get by him. It rolled all the way to the wall. Beltran did the exact opposite of hustle after the ball, but I don’t think it mattered anyway. Ellsbury got to the ball, fired in to the infield, and Rua beat the throw home. So dumb. Ellsbury’s got to keep that ball in front of him.

Sabathia finished the night with five runs allowed in five innings — Joe Girardi sent him back out for the sixth, then yanked him after a first pitch single, so what’s the point of even sending him out against a bunch of righties if that’s his leash? — and half of the 16 right-handed batters he faced reached base. That’s nothing new though. Righties have crushed him all year. This was the 12th time in 20 starts this year Sabathia has allowed four or more runs.

Broken record time: Sabathia should not start in five days, but you and I both know he will. He is now up to a 5.54 ERA on the season — fifth worst among 92 qualified starters — and is one of the worst pitchers in baseball. He has a 5.08 ERA in his last 374 innings dating back to 2012. The Yankees continue to preach the “World Series or bust” mantra yet run Sabathia out there every fifth day. He is actively hurting the team and should not be in the rotation. The sooner the brain trust accepts Sabathia is a sunk cost and a detriment to club, the sooner their postseason odds improve. This is untenable.

The Late Innings
The late innings of the game were a total mess. Rua’s inside-the-parker tied the game 5-5 and Teixeira untied it with a seventh inning solo homer, his second of the game. The Rangers then managed to tie the game with New York’s best reliever on the mound and win with their second best reliever on the mound. The Yankees are built to protect those one-run leads in the late innings and it didn’t happen.

Wildness helped the Rangers tie the game. Justin Wilson walked the leadoff man in the seventh — Texas had the leadoff man on base in seven of nine innings — and he moved to second on a wild pitch. After a single to put runners on the corners, Dellin Betances coaxed a ground ball to second that Stephen Drew threw wildly over Didi Gregorius’ head at second. He wasn’t going to get a double play, so the run was going to score to tie the game anyway, but Drew didn’t even get one out. That extended the inning and Dellin’s pitch count.

Following a clean eighth — Betances struck out two and Nick Goody struck out one in his MLB debut (Girardi lifted Dellin because of his pitch count) — Goody was sent back out to start the ninth, then yanked after allowing the first man to reach base. Why? Why why why? Why send him out there if the leash is one base-runner? It’s easily my least favorite Girardi move. Andrew Miller hadn’t pitched in five days and Bryan Mitchell was just called up for long relief. They weren’t short on arms.

Anyway, Miller replaced Goody, faced four batters, allowed three rockets, and walked the other batter. Ellsbury made a great catch to run down one of those rockets at the wall in center and the other rocket hit the runner at first. Lucky. The strike zone was a little tight in the ninth inning (via Brooks Baseball) … 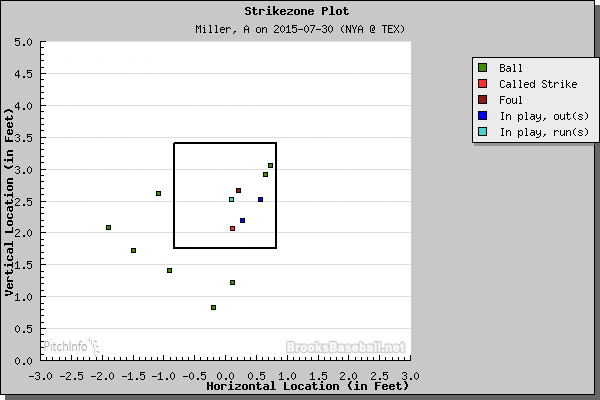 … but when you give up balls hit that hard, the strike zone isn’t an excuse. The Rangers won when Hamilton ripped a walk-off single to right, scoring the runner from second. Hamilton drove in four of the Rangers’ six runs because the Yankees’ lefties couldn’t get him out. Miller was fooling no one — again, three rockets and a walk — and he has now allowed six runs in 8.2 innings since coming off the DL. He was not sharp at all on Thursday.

Leftovers
Sabathia was sent to the hospital with “symptoms of dehydration” following the game, the Yankees announced. They said it did not affect him during his start, only after he left the game. Sabathia will not fly with the team tonight and will travel on his own tomorrow. “Symptoms of dehydration” is a 60-day DL injury, right?

Gardner had arguably his worst at-bat of the season with the bases loaded in the eighth. He took two fastballs on the outer half for called strikes then swung through an elevated fastball for strike three to end the inning. It was brutal. Gardner went 0-for-4 with three strikeouts and the sac fly.

The Yankees also had runners on first and second with no outs in the top of the ninth, but Teixeira (strikeout), McCann (fly out to the warning track), and Beltran (pop-up) made outs to kill the threat. McCann hit a two-run home run in the third inning. Forgot to mention that. The Yankees had eleven hits and four walks but went 1-for-8 with runners in scoring position.

Thanks to Drew’s errant throw in the seventh, Gregorius took an Elvis Andrus fist to the biscuits. He jumped to try to catch the throw and Andrus had his hand up while sliding in. I think Elvis was just jealous Didi was the superior shortstop all series. Also, Ellsbury picked up his annual outfield assist, throwing Andrus out at second trying to tag up on a fly ball. Replays showed he might have been safe, but the Texas didn’t challenge.

And finally, Goody was the 13th player to make his MLB debut for the Yankees this season. It’s not even August! He struck out the first batter he faced to end the eighth and walked the second leading off the ninth. Goody was charged with the loss. Also, he’s is the first player to wear No. 74 in Yankees history. How about that?

Up Next
The series in Texas is finally over and the Yankees are heading north to Chicago, where they will rendezvous with new teammate Dustin Ackley for a three-game series against the White Sox. Nathan Eovaldi and rookie Carlos Rodon will be the pitching matchup. But, before the game … the trade deadline! That’ll be fun, I’m sure. This team sure needs some pitching help.