Baseball is a Marathon, not a Sprint
The ‘good’ news after the Yankees Opening Day debacle is that there was only one way to go after such a depressing game – up – since you probably could not have scripted a much more disastrous start to the 2017 season.

The bad news after the Yankees Opening Day debacle was that I had to write the first sentence of this post … and the next sentence: for the first time in team history, they’ve dropped six straight Opening Day contests.

Despite the unsightly outcome, there were some notable positive nuggets to report as the team took the field on Sunday afternoon:

Things quickly spiraled out of control after the first pitch, however, as Masahiro Tanaka delivered one of the worst Opening Day performances by any pitcher in franchise history.

Tanaka became the only Yankee ever to allow at least seven earned runs and get fewer than 10 outs on Opening Day. And his 2? innings tied Ron Guidry (1983) and Mel Stottlemyre (1973) for the fewest by a Yankee Opening Day starter in the last 100 years.

Along with poor fastball command, Tanaka’s splitter wasn’t fooling the Rays. Though he did get a respectable five whiffs and had good location on the 15 splits he threw, burying the pitch at the bottom of the zone … 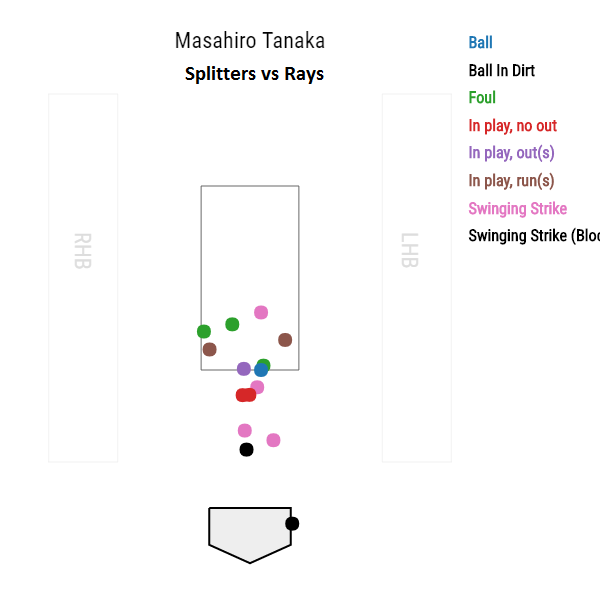 … the Rays did damage on the five splitters they put in play, crushing two singles, a deep sac fly and a homer off the pitch.

While Tanaka got clobbered on the mound, there were a couple encouraging results from the bats on Sunday.

Sanchez might have gone 0-for-5 but his first-inning groundout was a rocket, with an exit velocity of 115.7 mph. It was the second-hardest hit ball recorded by Statcast (since 2015) for any Yankee, behind only an A-Rod homer on May 1, 2015 measured at 116.5 mph off the bat.

Starlin Castro did something that Robinson Cano never achieved in pinstripes – a three-hit Opening Day performance (the most recent Yankee second baseman to do it was Tony Womack in 2005) – while Chase Headley joined A-Rod (2006) and Wade Boggs (1994) as the only Yankee third baseman in the last 90 seasons to have three hits on Opening Day.

Second time’s a charm
The Yankees bounced back from their Game 1 disaster with an impressive blanking of the Rays on Tuesday. The 5-0 win was just the second time in the last quarter-century that the Yanks pitched a shutout in either their first or second game (also 2002), and was the team’s largest shutout win this early into the season since they beat the Twins 8-0 in the 1988 opener. Last year’s first shutout didn’t come until May 4.

The offense was ignited by a most unlikely source, when the (listed) 5-foot-8 Ronald Torreyes – who had one homer in 161 at-bats in his first two seasons in the majors – drilled a two-run shot to left center field to give the Yankees a 2-0 lead. He’s got a long ways to go to catch the franchise leader in homers by a player that short – of course, it’s Yogi Berra (5-foot-7) with 358 career bombs.

CC Sabathia put together one of his best season-opening performances, scattering three hits and two walks across five shutout innings. The only other time he didn’t allow a run in his first start was back in 2004 against the Twins.

It had been 15 years since a Yankee starter threw five-or-more scoreless innings in either the team’s first or second game: In 2003, both Roger Clemens (6 innings) and Andy Pettitte (7 innings) held the Blue Jays without a run in the first two games of the season.

Little Mike, No Offense
Thanks to another frustrating outing by Michael Pineda and a lackluster effort by the offense, the Yankees lost 4-1 in the rubber game of this three-game set. This is the fifth time in the last six years the team has dropped its opening series of the season.

Michael Pineda didn’t make it out of the fourth inning, producing an all-too-familiar statline. The good: six strikeouts, no walks; The bad: eight hits, four runs. Sometimes you can predict baseball.

Three of the four runs he surrendered came with two outs, continuing yet another perplexing trend from 2016 — his inability to finish off innings. Last year Pineda allowed the most two-out hits (80) and second-most two-out runs (52) in the majors … and seems to be on track to repeat that performance in 2017.

Not only did Pineda extend his personal winless streak to a career-worst 11 starts dating back to early August of last year, he’s gone eight starts in a row without a win against Tampa Bay, the longest such streak by any Yankee. Among all pitchers, only Jeff Suppan (10 straight from 1999-03) and Sidney Ponson (9 straight from 2000-02) have recorded longer winless streaks versus the Rays.

The lone offensive highlight came from the bat of Jacoby Ellsbury, who took Alex Cobb deep in the second inning to knot the score at 1-1. It was his 33rd homer since coming to the Bronx in 2014, but just the second one that’s tied up a game.