The old saying is every team is going to win 50 games and lose 50 games each year, and it’s what they do in the other 62 games that defines the season. This felt like one of those 50 losses. A generally unremarkable game all around in which the Yankees never really felt in control. It happens. The Indians won the series opener 6-2 on Monday.

Good Sevy or Bad Sevy?
Was this a good start or a bad start for Luis Severino? I can’t quite tell. On one hand, four hits and nine strikeouts in 6.2 innings is pretty great. On the other, three solo homers and three walks isn’t. The three walks went to three consecutive batters in the fourth inning too. I can’t imagine Severino, who went into this start with a 6.5% walk rate, has had many three-walk innings this year.

Anyway, the home runs were the real problem, because duh. Severino was able to limit the damage with solo homers, so I guess that’s good, but giving up a homer to Jose Ramirez immediate after the Yankees took the lead against Corey Kluber really stunk. So did allowing the go-ahead shot to Carlos Santana in the seventh. All three homers were kinda deflating. Ramirez hit one in the first to give the Indians a quick lead with Kluber on the mound, then Ramirez tied the game right after the Yankees took the lead, and then Santana broke the tie in the seventh. Blah. The dinger pitch locations: 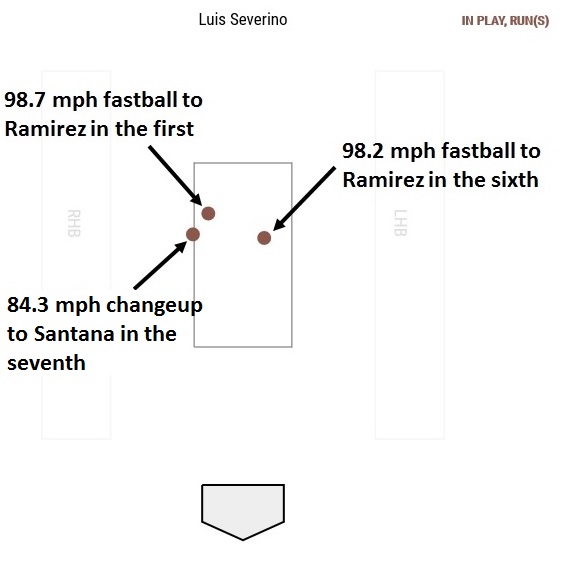 Three pitches up in the zone. Ramirez (in the first) and Santana really reached out to hook an outside pitch into the right field seats, so credit to them for that, but yeah. Severino left three pitches up and paid the price. Prior to Monday’s start Severino had allowed four home runs total in his previous eight starts and 50 innings. Then the Indians got him for three homers in one game. Go figure.

Severino’s final line: 6.2 IP, 4 H, 4 R, 3 ER, 3 BB, 9 K. Meh. The fourth run was stupid. Bradley Zimmer roped a one-out single in the seventh, advanced to third on a Starlin Castro error — he straight up missed the throw from Gary Sanchez on Zimmer’s steal attempt — then scored on an Adam Warren wild pitch. Threw a 55-foot fastball. The Yankees gifted the Indians three bases and a run there. Sloppy. Anyway, if this is a bad start for Severino now, he’ll be just fine.

Two Run Against Kluber
Hey, that’s two more runs than I expected the Yankees to score going into the game. Kluber is outrageously good. Easily the best right-handed pitcher in the American League in my opinion, and arguably the best pitcher in the league regardless of handedness. Chris Sale is almost certainly going to win the Cy Young, but man, Kluber is awesome too. He went into this game with a 2.65 ERA (2.56 FIP) in 152.2 innings. Dude is a monster.

And yet, the Yankees still managed to scratch out two runs against Kluber in his eight innings. Chase Headley got the Yankees on the board and tied the game 1-1 with a third inning solo homer. Hanging breaking ball and Headley crushed it. A rare mistake from Kluber, that was. The Yankees took a 2-1 lead on Todd Frazier’s two-out, two-strike ground ball single in the fifth. Jacoby Ellsbury doubled as the previous batter to set that run up.

Kluber started the sixth inning by walking Aaron Hicks — that was Kluber’s only walk of the night — and that was it. The Yankees never had another baserunner. Twelve up, twelve down to end the game. Only three of those final 12 batters hit the ball out of the infield. Three hits and one walk for the Yankees all night. Headley’s homer, Ellsbury’s double, Frazier’s single, Hicks’ walk. That’s all the offense. Kluber will do that to a team.

About The Bullpen
A few things about the bullpen. One, David Robertson was warming in the seventh inning, when the score was tied 2-2. Then Severino gave up the homer to Santana and the Indians took a 3-2 lead, and Robertson sat down. Warren came in. What’s the thinking behind not going with Robertson, who was already warm and will probably have to pitch tomorrow just to get work, to keep it a one-run deficit, and instead going with the struggling Warren? Down one run is more dire than a tie game!

Two, why not use Aroldis Chapman at some point? Joe Girardi keeps saying they have to get Chapman right and they do, so why not use him, say, with the Yankees down 4-2 in the ninth? Seemed like a pretty good opportunity to get him some action. Between this game and Sunday’s blowout win, I think the Yankees blew some recent opportunities to get Chapman some work in lower leverage spots to help him right the ship. Those are the situations he should be pitching now. Now extra innings of a tie game like Friday night.

Leftovers
Warren allowed the runner he inherited from Severino to score, then allowed a run of his own on Austin Jackson’s solo home run in the eighth. Chasen Shreve allowed a ninth inning run on a walk (Santana) and a double (Zimmer). It’s one thing to fall behind 3-2 following the Santana homer. It’s another when the bullpen lets that 3-2 deficit swell into a 6-2 deficit. You’re better than that, dudes.

The three Yankees hits came from the 7-8-9 hitters, which means the 1-2-3-4-5-6 hitters went a combined 0-for-22 with the Hicks walk and seven strikeouts. Sanchez did reach base when Giovanny Urshela got a little too cute and threw away a barehanded play at third, though the Yankees couldn’t get him home. I have a hard time getting worked up about the offense stagnating against Kluber (and Cody Allen).

Box Score, WPA Graph & Standings
Head over to ESPN for the box score and updated standings, and MLB.com for the video highlights. We have a Bullpen Workload page. Here’s the loss probability graph:

Up Next
Same two teams Tuesday night, in the middle game of this three-game series. Jaime Garcia and Trevor Bauer are the scheduled starting pitchers. Not-so-bold prediction: runs will be scored.