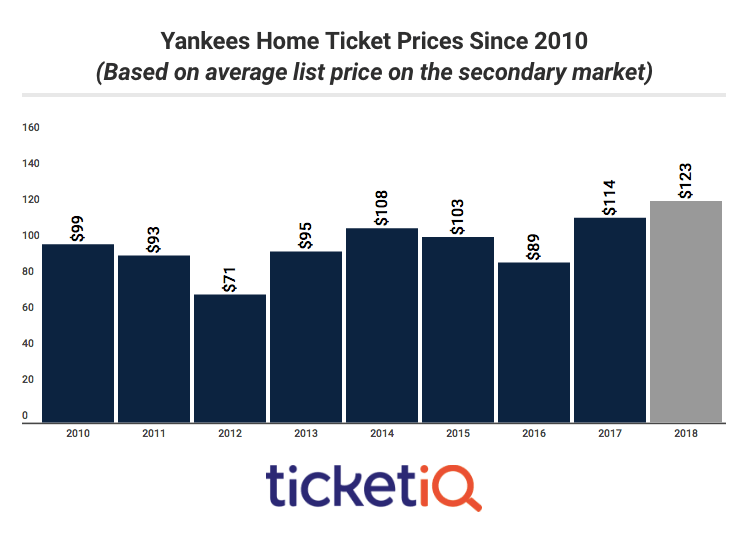 Giancarlo Stanton is already making noise in New York. The slugger, who joined the Yankees from Miami during the off-season, homered twice on Opening Day in his pinstripe debut, when the Yanks dumped the Blue Jays at Toronto Thursday. New York, of course, is hoping the debut is a sign of things to come.

Stanton’s move to New York is definitely generating interest in the team. After completing a four-game road trip in Toronto, the Yankees will open at home on Monday, and prices for New York’s home opener and the season reflect the enthusiasm building around the rebuilt Yankees.

According to data from secondary market vendor TicketIQ, this year’s home opener against Tampa Bay will be the most expensive of the decade and a 24 percent increase over the cost of an OD ticket on the secondary market last year. The current average asking price for Opening Day tickets at Yankee Stadium is $374. The only other time New York broke the $300 barrier on OD was last season, when tickets cost $301. The third most expensive ticket on the secondary market was the 2010 home opener, which settled at $258. The Yankees won their most recent World Series in 2009. The cheapest home opener ticket of the decade was $167 in 2016.

By way of comparison, the average asking price on the secondary market for Yankees tickets is $23 higher than that of the crosstown Mets ($100) and OD Mets tickets are currently sitting at $229.

The Yankees advanced to the ALCS last year as a wild-card after finishing second in the AL East. It was the first time 2012 that New York got to the Championship Series and only the second time in the last five seasons that it advanced to the postseason.

New York, which has won a total of 27 pennants, debuts a rookie manage this season in former player Aaron Boone, who will manage a star-studded roster. Boone, who has no previous managerial experience, was an All-Star in 2003, when he played for the Yankees on their run to the World Series, where they lost to Miami.

Besides acquiring Stanton, the Yankees return slugger Aaron Judge, who set a rookie record with 52 home runs in 2017. On the mound, Luis Severino had a breakout season last year, finishing third in Cy Young voting and Chad Green emerged as a dominant reliever.