Contemplating the end of RAB, I thought of its origins. Why did the three of us come together to create this site?

Ben covered the basics in his own farewell post so apologies if I’m covering known ground. But this is the story as I remember and can document it.

In 2006 we were all writing on our own blogs — The Sporting Brews, Off The Facade, In George We Trust. At that stage in the evolution of blogging everyone read everyone else’s blogs, so we were all familiar with each other’s work. Ben and I both started new jobs in the second half of 2006 and were posting less frequently than we had previously. When Ben asked me to join him on Off The Facade, which was part of a network and much bigger than my puny operation, it was an easy yes. And so it began.

After a few months things were going well, but not exceptionally well. The network was having some technical issues. We felt a little stifled in terms of what we could write. On a Wednesday in mid-January, Ben emailed:

I’m getting really sick of all of this [network] server downtime and I am not against the idea of taking our writing elsewhere.

A few hours later in the same email thread, a name was born. Ben again:

I’ve always liked tying in River Avenue to a Yankees blog. It’s more out-of-the-box than Pinstripe Something or Bronx Anything. River Ave. Blues is what I had going…

Two weeks later Ben and I still hadn’t made a decision, but we’d talked more about setting off on our own. In the middle of an email thread about something completely different, I wrote:

Re: breaking off. We need to set a deadline on a decision for this. Say, by March 1. I’d actually like to get Mike A. on board…

That was February 2. It took maybe a day to get Mike on board. At that point it was all technical: how quickly could we buy web hosting, set up the site, and start publishing?

The answer was just over two weeks. On February 20, Mike kicked it all off. About an hour after he christened the site, he sent this in an email.

I’m not in the writing business, nor do I have any desire to enter into it, so it’s really up to you guys.

Later in the week I was enthralled by how many people actually visited the site:

The blog grew. It grew and it grew and it grew. It grew to levels we couldn’t even imagine when it launched. Had we kept at it, I daresay it would have continued growing. But that passion faded years ago, as anyone who’s been reading since the early days can tell you. If this farewell doesn’t seem very emotional, it’s because I moved on long ago.

And so I close the RAB chapter of my life with some gratitude:

Dad for basically everything: my Yankee fandom, encouragement of my writing pursuits, and constant readership. In those early days, when barely anyone read or commented, Dad was there to support us.

Ben, Mike, and Jay for friendships that extend far beyond River Ave. Blues. Y’all were at my wedding, we were all at Ben’s wedding, and it’s reassuring to know that we’ll see each other long after these doors close.

Jonah Keri and Jay Jaffe for using their relatively prominent positions to help spread the good work that independent bloggers were doing back in the day.

All of you who found us over the years. I’m fairly certain we would have kept this thing going through at least 2011 without the level of readership that we attained. But boy did y’all keep us motivated. Thanks for stopping by.

I’m at 92%. You might be a bit above or a bit below that, depending on how you feel about how the team is constructed. No matter where you are, the important thing is to arrive at a number. Look around the league. What would have to go wrong for the Yankees and right for everyone else for them to miss the postseason? It doesn’t seem too likely.

Would signing Bryce Harper or Manny Machado much improve your confidence of the Yankees making the postseason? Probably not, since it’s high already. I go from 92% to 98% — it would take a whole ton going wrong in the Bronx combined with enough going right in Anaheim, Tampa, or Minnesota to topple the Yankees in this scenario.

Making the playoffs 98 times out of 100 rather than 92 on the surface suggests that signing Harper or Machado might not be the best use of resources. Why take on that level of risk for only a marginal improvement in your chances?

The goal, of course, isn’t simply to make the playoffs. Let’s extend this exercise.

How confident are you that the Yankees will win the AL East? This has value, as we witnessed the last two years in the Wild Card game. It absolutely affects the confidence you’d have in the Yankees progressing to the ALDS, which de facto affects your confidence in them making or winning the World Series.

After running each scenario through my various confidences in them winning at each stage, this is where I arrive:

Is shelling out a long-term $300 million contract worth a two-percentage-point increase in their chances of winning the World Series?

For starters, it’s not just two percentage points this year. Signing one of these free agents will add to the team’s confidence in winning the World Series for years to come. That is, every year for the next — say five, at least — you’ll have more confidence that the Yankees will win the World Series than you would if they don’t sign one of them.

Second, percentage points don’t tell the whole story here. By nature your confidence in any one team winning the World Series won’t be that high. The field is too large and baseball too unpredictable. Increasing a low number by two percentage points, though, can be significant in terms of relative increase. For instance, signing Harper or Machado increases my confidence that they’ll make the postseason by six percentage points, which in this case amounts to 6.5%. Going from 13% to 15% confidence they win the World Series is a 15% increase. That’s pretty significant. 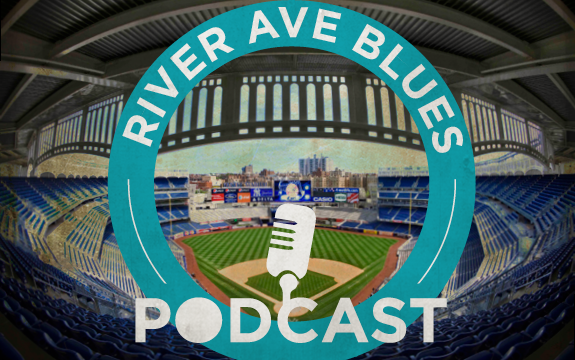 The best part of the podcast is where we talk about Mike Moustakas and I mention the idea that he might not sign until after the draft. That boner is memorialized forever in this podcast. This also means that Jake Arrieta will sign this weekend.

The second best part is everything else. We’re talking about Estevan Florial, the power bats, some stuff from around the news, and of course a few questions from you.

You can call our voicemail at 716-393-5330 to leave us questions for future shows or email us at [email protected].  Thanks for listening.

Sometime next week we’ll take the audio calls you’ve sent in during the last few weeks.

You can call our voicemail at 716-393-5330 to leave us questions for future shows. Much better to play the audio of you asking rather than reading it ourselves, as you can hear every week.

It’s top prospects season, and we have ESPN’s Keith Law on the pod to discuss his Top 100 list, which features five Yankees (plus two on the near-miss list).

You can call our voicemail at 716-393-5330 to leave us questions for future shows. Much better to play the audio of you asking rather than reading it ourselves, as you can hear every week.

As promised, we’re answering your questions this week. Keep them coming, both to the voicemail and the email.

We’re podcasting through The Worst Off-Season In Recent Memory, and frankly it’s making things feel a bit better. To be fair, we have a guest on to make things easier this week.

You all know Ryan Ruocco as the guy who calls play-by-play when Michael Kay doesn’t go on a road trip. What you might not know is that he hosts a podcast, R2C2, with CC Sabathia. No joke, it’s a damn entertaining listen. So after you listen to our interview with Ryan, make sure to subscribe to that one as well. And then make sure to follow him on Twitter, @RyanRuocco.