While discussing the Chase Wright situation yesterday, another interesting topic came up: who’s going to start Saturday against the Red Sox? Pettitte has Friday, and Wright — if he doesn’t completely bomb — will have enough rest to start Sunday. That leaves a damning hole.

Wang and Karstens won’t be back for the weekend. Starting Wright and Igawa on short rest on back to back days isn’t exactly advisable. What to do?

The easy answer is to start Sean Henn. However, much like the decision to give Chase Wright tonight’s start, this would be a mistake. Henn has done very well out of the bullpen so far, so why mess that up? Plus, the Yanks are going to need plenty of help from the bullpen against the Indians, and likely will also need it against the Red Sox. Why sacrifice a bullpen arm in that situation?

(Yes, I realize there are now eight bullpen arms: Mo, Farns, Proctor, Vizcaino, Henn, Myers, Bruney, and Britton. All of them may be needed over the next four games, and all of them, sans Britton and Mo, have been worked hard this season. Having eight guys in the bullpen is a Godsend this week.)

The solution suggested by River Ave. Blues: Mighty Matt DeSalvo. He’s dealing this year: 2 ER, 11 K, 3 BB, 6 H over 9 innings of work. Yes, this is just as small a sample as Wright’s (though DeSalvo has fewer innings). But we’re also talking about a guy who 1) is facing tougher competition (the Braves and Red Sox AAA teams, as opposed to the Orioles and Nats AA teams) and 2) is/was an actual prospect.

Of course, we all know about his hiccup last year, but given his performances before and after, that seems like an anomaly. That’s what happens when you double your career walk rate. He also had personal issues to work through last year.

Really, there was little good reason to pass over DeSalvo for Wright in the first place (the 40-man roster status may have been the deciding factor, with DeSalvo having lost his spot to Miguel Cairo in January). However, with the opportunity for another start, there is even less reason to deny DeSalvo this time around. Choose Henn if you will, but that’s too simplistic and it doesn’t allow him to continue what he’s been doing so well this season: coming out of the pen and getting guys out. Some guys are just better off in the bullpen. 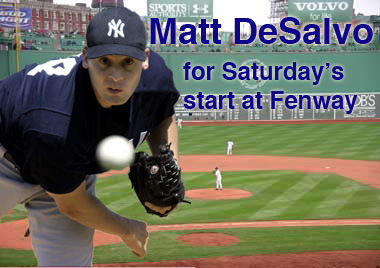 Ben, Mike, and I have made no attempt to hide our sincere opinion that Phil Hughes should be called up in the wake of the Yankees recent pitching injuries. Over the course of the season, they will face even more injuries and find that certain pitchers — I won’t even sugar coat it: I’m talking about Igawa — aren’t going to be consistently effective. Therefore, if called up now, Hughes should manage to stay in the rotation for the remainder of the season. People claim that he still has stuff to learn in the minors, but he can learn all of that in the majors. And he’ll learn it against bona fide competition, not the retreads that fill AAA rosters.

Yet, the Yankees decided to call up Chase Wright as a temporary replacement. The reasoning: he impressed them in the spring, and he’s had two dominant outings so far in AA. All of which, of course, means that he’s a better option than the guy with the most talent. At least that’s how the Yankees brass — and many fans — are assessing the situation.

People often cite psychology as a reason to not promote Hughes. He’s not ready, they say — though I wholeheartedly contest that. If you bring him up now and he gets rocked (they say), you can mess up his head and ruin our blue chip prospect. However, if we’re going to talk psychology — which is often an exercise in futility — we have to bring up the damage the Yankees are doing to him right now. First was Spring Training, when they flat out told him he wouldn’t make the team. And now we have him passed over promotion by Chase Wright. How do you think he feels now? At least if he got the call and got smacked around, he could make a learning experience of it.

He says he’s ready, the scouts say he’s ready, but for some reason, the Yankees organization is obsessed with babying its pitchers. Yeah, you don’t want to see your blue chipper bust, but holding him back is going to have adverse effects at some point. He’s mentally ready, and his stuff is ready (and if I hear that he needs a dominating changeup one more time, I’m going to put a fist through my freakin’ wall). Call him up and let him help this team. Keeping him on pitch counts in AAA isn’t doing him any good — or at least compared to the good that can come from a stint in the majors.

I digress, though. My objective wasn’t to campaign for Phil Hughes — again. If management is going to be set in their ways, I’m doing nothing but wasting breath. My objective is to debunk this Chase Wright myth. Even if they are refusing to call up Hughes, there are four other options in the Scranton rotation that are better than Wright.

END_OF_DOCUMENT_TOKEN_TO_BE_REPLACED

Why you ask? Because their likely replacements will probably outperform them.

Chase Wright is not the answer. If you think he is, then I hope the simplicity of calling him up because he’sÂ lined up to start Tuesday and is already on theÂ 40-man rosterÂ comforts youÂ when he gets his brains beat in. Start the process of dumping Colter Bean and Jeff Kennard off the 40-man (seriously, why do these guys have a spot anyway? They’re dead weight), and get Hughes andÂ DeSalvo ready to go.

IÂ can’t fathomÂ why everyone’s afraid to call Hughes up. He’sÂ learned as much as possibleÂ in the minors, he’s as ready as he’s going to get, and the Yanks haveÂ the need for him. The Yanks can show some confidence inÂ Mighty Matt after his dominant outing, and help him further get back on track.Â

It’s an ideal situation: they’re low risk moves with the potential for great reward, plus they’re nice and easy to back out of.Â

FYI, Britton got the call to reinforce the pen for the next couple of days.

Let’s get a little discussion going: who should fill in for Moose and Meatball, why, and how will they fare?

Update: The Yanks have decided who will start Tuesday, but won’t announce who it’ll beÂ until the player has been notified. Translation: Double-A Trenton will need to find a starter for Tuesday. Sigh.

I can’t believe I have to campaign for a Phil Hughes promotion….

Update Part Deux: It’s Chase “I’m half the pitcher Hughes is, but I’ve made 2 great starts in a league I’m too old for after having 1 good year since being drafted in 2001” Wright. I’m not bitter…

In theory, Communism works. In theory.

His control looked a bit off. He was falling behind guys and using his best fastball to catch up, but eventually guys are going to wise up to that. I still don’t think he has much, if anything, left to learn in the minors. I just think he’s having some control issues right now.

Not that it really matters, anyway. Pete Abraham is reporting that Mike Mussina won’t hit the DL. This, of course, means that we’ll be seeing Darrell Rasner once more. I’d be less concerned about that if the start wasn’t coming against the Injuns.

So it’s Igawa, Pavano, and Pettitte against the A’s, followed by an off-day, then Rasner, Igawa, and Pavano against the Indians. Hopefully, this means Pettitte, Moose, and Wang against the Red Sox. For that to happen, though, Wang would have to make his one rehab start on Tuesday, and everything would have to go perfectly thereafter. Not looking too good…

First it was Obi-Wang. Then it was Joba Chamberlain down in the minors. Now it’s Mike Mussina, the supposed rock of stability that always seems to be one little tremor away from a landslide. Hamstring injuries have run rampant through the Yanks organization in 2007, and they’ve been on the rise in all of baseball the last couple of years. Maybe guys are slacking off during pregame stretching, maybe their muscles are deteriorating from PED use, maybe they’re all just fluke injuries. No matter what’s causing them, the Yanks have to deal with ’em.

Looking at the schedule, I figure the rotation shakes out like this:

That TBD guy is what I’m here to talk about.

END_OF_DOCUMENT_TOKEN_TO_BE_REPLACED

After their team’s first 5 games…

With Darrell Rasner’s untimely removal today â€” perhaps due to a painful blister â€” the Yankees starting rotation completed its first run through the rotation. While the Yanks are missing Chien Ming-Wang, their young ace, the early returns are hardly promising. Let’s take a look.

So yikes. The Yanks’ starters are 0-2 with a 9.97 ERA in 21.2 innings. They are sporting a WHIP of 2.12 and are generally being a drain on the team. The bullpen has been asked to pick up at least four innings in every game this season, and the Yankees offense needs to generate 10 runs a game to stay in the win column.

The weather is a factor right now. It’s very hard to pitch in the cold. Fingers have no feeling, and breaking pitches are nearly impossible to spot. And it’s still just once through the rotation.

These outings will start to put pressure on the Yankees to find some pitching. I’m sure Brian Cashman is working Roger Clemens’ phone non-stop these days. I’m sure Phil Hughes, who had a solid first outing for the AAA the other day, knows what’s happening up here.

Over the next few weeks, the state of the Yankees pitching will become clear. Clemens will make a decision by the end of this month; Chien-Ming Wang will return to the anchor the rotation in a few weeks; and Hughes will have a few more AAA starts under his belt. But for now, we just have to hope that Pettitte and Mussina can regain their form, that Carl Pavano can stay healthy and that Igawa, Rasner or whoever else may pitch in that five spot can keep the team in the game.