Via Donnie Collins, the Yankees have released DH Jack Cust, OF Colin Curtis, and OF Ray Kruml. Curtis has 64 plate appearances with the big league team in 2010 (42 wRC+), but missed all of last season with a shoulder injury. He’ll be best remembered for his mid-at-bat pinch-hit homer for Brett Gardner. Cust was Triple-A Empire State’s most dangerous hitter this year, posting a 145 wRC+ with an absurd 19.1% walk rate. Kruml was just a spare outfielder for the club.

None of the three were going to see time for the big league team this year, but the Cust and Curtis moves are huge blows to Empire State’s push for a playoff berth. I’m guessing we’re going to see a promotion or two in the coming weeks.

Via Sweeny Murti, the Yankees have signed Jack Cust to a minor league contract. The Astros released the 33-year-old left-handed slugger just yesterday. He gives them some decent Triple-A insurance in case Raul Ibanez’s bat speed continues to be measurable on the Molina scale. It’s also a pretty clear indication that Russell Branyan’s back isn’t getting better anytime soon.

Cust has hit .251/.379/.441 against right-handers over the last three years, though he’s a classic three-true outcomes type. Nearly 50% of his plate appearances since the start of 2009 have ended with a homer, a walk, or a strikeout (49.3% to be exact). Cust has negative defensive value, capable of faking left field and first base on the rarest of occasions. He’s a DH all the way. Chances are we’ll see him get a few at-bats before the end of camp next week.

Via Ken Davidoff, the representatives for Jack Cust, Vlad Guerrero, and Raul Ibanez have contact the Yankees recently about their now vacant DH job. Cust signed with the Astros last night, so he’s already a non-option. Joe wrote about Ibanez yesterday, so I’ll just refer you to that.

As far as Vlad goes, he’s much more name than production at this point. The soon-to-be 37-year-old hit just .290/.317/.416 with 13 homers last year, drawing just 14 unintentional walks in 590 plate appearances. His big year with the Rangers in 2010 was more like a big first half, and it’s worth noting that his batted ball profile has changed dramatically since mid-2010. He’s a ground ball machine now, which means few homers and lots of double plays. I’d prefer a left-handed batter myself, one willing to work the pitcher and not chase the first pitch in the same time zone. 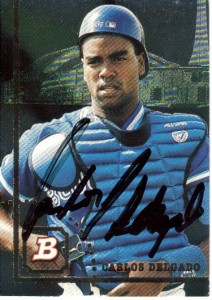 Of the three major holes the Yankees have to fill this offseason, designated hitter is probably the least important. I think everyone’s preference is to bring Hideki Matsui back on a one year deal, and we’ve already discussed Nick Johnson as a backup plan. However, every good backup plan needs a backup backup plan.

One such backup backup plan could be former Toronto great Carlos Delgado. After spending the last four years stuck in Queens, Delgado hits the free agent market for just the second time in his career (the first time he cashed in on a four year, $52M deal from the Marlins of all teams). However, the former AL MVP runner-up missed all but a month of the 2009 season with an inpingement in his hip, which is the exact same thing that kept A-Rod on the shelf to start the season. Delgado went ahead and had the full blown surgery to repair the condition rather than the hybrid procedure the Yanks’ third baseman had. It was Delgado’s first trip to the DL in four years, a testament to his durability. A-Rod and Chase Utley came back from similar procedures like champs, however those guys are world class athletes and several years younger than Delgado.

Obviously, there’s a tremendous health risk in signing Delgado. He’s expected to join a Puerto Rican League winter ball team soon, which will give him a chance to showcase his surgically repaired hip. The risk comes with a potential great reward however, as Delgado remains one of the game’s best sluggers despite being 37-years-old.

Any team that signs Carlos Delgado shouldn’t expect the .290-.400-.580 monster he was for most of his career, instead he’s probably a .260-.380-.470 guy these days, which really isn’t that far off from what Hideki Matsui was in 2009. His power remains elite (sitting around a .220 IsoP the last few years), and it’ll probably get a bump up improve with a move to the New Yankee Stadium. Of course, the health of his hip is the controlling condition. If he’s not 100% a-okay, then forget it. Oh, and nothing more than a one year deal too.

I’m not saying Cust is a non-option at DH, but he should only be a “break glass in case of emergency” option. World Series MVP Hideki Matsui remains the most obvious and best choice to fill the DH spot going into 2010, however there are no shortage of affordable options.