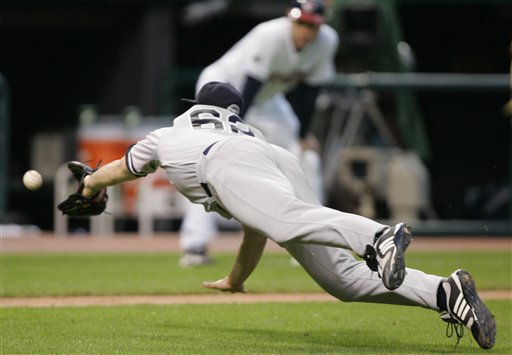 When Mariano Rivera and the Yankees sealed the deal on their 5-2 victory over the Indians last night, it marked the 18th game in a row in which the Yankees had not committed an error. Over that span of games, the Yankees have gone 14-4, and the team seems to be living proof of the adage “defense wins games.”

For that, we have to move beyond the limited statistic of errors and look at some of the new defensive metrics that assess range and defensive efficiency. Over the weekend, long-time RAB reader Jamal G. commented on the defense: “I think the huge defensive statistic that people should be paying attention to is the Yankees’ being 5th in the AL (12th in MLB) in Team Defensive Efficiency with a .697%. I expected the defense to be better, but in the 18-20 range; this is surprisingly awesome.”

I had recruited Jamal to write a longer guest column for us, but then the new Statistician Magician beat us to the punch. In his piece, he analyzes the various parts that make up the Yankee defensive whole and concludes that, while so far there are no stand-outs, the team is much improved over recent years. He concludes:

The team’s overall defense is close to average. But that is much improved based on what we all saw last season. And because of this, they don’t have a real flaw: above-average pitching, once it comes around completely; a very good offense when healthy; and now a decent enough defense too.

If they keep up the glove-work, which they should, it will be a great step in the right direction for Cashman and the rest of the organization. Because Cashman seeing their success coincide with an improvement on defense, will let him truly understand what he has been missing for some time now.

With Derek Jeter’s new-found range, Robinson Cano’s resurgence and some excellent outfield defense after a few years of Matsui-Damon-Abreu, the Yankees are turning balls that once were hit into outs. Their starting pitchers can go deeper into games, and the team enjoys fewer opposing base runners.

Right now, it’s all clicking for the Yanks, and their defense is a large part of it. The error-less streak looks good on paper and makes for some nice headlines, but it tells only part of the story. As much as they are winning with hitting and winning with pitching, the Yankees are starting to win with fielding too, and as Flying Joba Chamberlain showed last night, it looks good.

Photo by Mark Duncan for the Associated Press.