River Ave. Blues » What Went Right: The seventh inning on
Pettitte could be back for 2010
Matsui noticeably absent from Elias Rankings

Over the next week or so, we’ll again break down what went wrong and what went right for the Yankees. The series this year will be much more enjoyable than last. 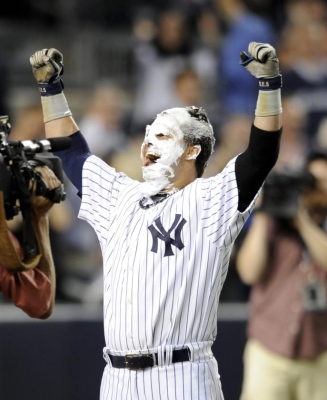 Against the 2009 Yankees, no lead was safe. Teams with four or five run leads heading into the seventh inning still had to beware. The slightest slip-up could lead to yet another Yankee comeback. Many teams fell victim to the Yankees late-innings machine, notably the 11 teams that lost to the Yankees in their final at-bat (with apologies to the Twins and Jays, who ran into the walk-off buzzsaw three times each). Those 15 wins made a huge difference in the Yankees season.

The Yankees led the AL in runs scored, OBP, SLG, and were just .002 behind the Angels in BA. From the seventh inning on, they led all these categories by a wide margin. Their 336 runs topped the next closest team, the Angels, by 48. They also led in all of the triple slash categories: .009 in BA, .020 in OBP, and .079 in SLG. That last stat owes much to home runs, which the Yanks led with 92. The next closest team, the Rays, had just 63.

Offensively, there was no team better than the Yankees from the seventh inning on. Yet for the team to enjoy those come from behind victories they also needed some key pitching performances. Without a shutdown bullpen to hold the other team in place, not even the Yankees’ late-innings offense can win that many games. To that end, the Yankees pitchers did their job, holding opponents to a .303 OBP from inning seven on, second to only the A’s at .302. They were also second best in slugging, .368, and tops in batting average against, .225. Unsurprisingly, they also struck out more batters than any other teams from innings seven on.

Let’s take a look at the individuals who were part of this incredibly run and how they contributed to wins with late-inning performances.

Jeter had a stellar season at the plate, thriving in the leadoff slot. One of the highlights of the summer was watching Jeter slap the first pitch of the game into the shallow outfield for a base hit (or, in the case of Josh Beckett, over the fence for a homer). Yet Jeter saved his best performances for late in the game. Of his 18 home runs, eight came after the sixth inning. He also walked 24 times to 27 strikeouts, and stole five bases without being caught. When a comeback was in the works, Jeter was leading the charge.

The knock on Cano in 2009 was his dearth of production with runners in scoring position. This naturally led to a narrative that painted Cano as a poor clutch performer. Yet in the later innings, when the Yanks mounted comebacks, Cano was at his best. His 105 total bases from the seventh inning on were second best on the team to Mark Teixeira. He also had two walk-off hits. While none of this erases Cano’s struggles with runners in scoring position, it helps dispel the idea that he can’t hit in the clutch. When the Yanks needed production late in the game, Cano was right there.

Gardner hit just three home runs in 2009, and two came after the sixth inning. One of them was integral in a comeback against the Twins, an inside-the-park home run that got a quiet crowd on its feet. Gardner didn’t come to the plate as frequently as others on the team, but when he did, he produced.

Early in the season, it seemed like Damon was coming up big all the time. Even when the Yanks eventually lost he provided some late-innings heroics. Ten of his 24 homers came in late innings situations, including his walk-off shot against the Twins. Damon also displayed excellent patience in the late innings, striking out just 26 times to 25 walks.

Early in the season Hideki struggled, but when the games moved into the later innings he thrived. He was one of three Yankees with an OPS over 1.000 from the seventh inning on. Nearly half of his 28 home runs came in that span as well (13 of 28). When we think of late-inning performances, it’s easy to think of A-Rod and his walk-off homers or Melky and his heroics, but Matsui was a huge part of the team’s success in that regard. His performance in the late innings might have been underrated.

If Melky could hit in innings one through six like he did from inning seven on, he’d be a major asset for the Yankees. I do think, after watching him improve in the 2009 season, that he can be that, though that’s a topic for another post. Melky had his share of walk-off moments, but that doesn’t tell the whole story. He hit his best in the late innings, and that helped the Yankees achieve a number of come from behind victories.

I can’t count how many times I sarcastically yelled “unclutch!” when A-Rod came up with a big hit in 2009. His two walk-off home runs only begin to tell the story of how he came up big in the late innings. Two of his biggest hits of the year, in fact, don’t show up on the walk-off highlight reels. His game-tying home run off Brad Lidge set up a Melky Cabrera walk-off. My favorite A-Rod hit, though, came in June against the Red Sox. Down 2-1 in the eighth, A-Rod smacked a double to put the Yankees ahead. They eventually lost the game, but that hit was just huge.

The 3-4-5 combination of Tex, A-Rod, and Matsui dominated the late innings. They all had OPSs above 1.000, and each hit at least 13 home runs in those situations. Teixeira led the way with 16, and also smacked 13 late-innings doubles. His 114 total bases led the team.

Jorge didn’t put up the best numbers in the late innings, but that’s only compared to his teammates. In isolation, his hitting from the seventh inning on was pretty good, and he had two walk-off hits to show for it. His walk-off single against the Blue Jays on July 4th weekend prompted one of my favorite questions to Girardi this season, courtesy of Kim Jones. “So Joe, how’d you like the single by Jorge?” I only wish Girardi had answered, “Hated it, Kim. I wanted this one to go at least 16.”

Thinking back on the Yankees late-innings dramatics, I don’t remember much of Swisher. His walk-off homer against Tampa was memorable because it was his first walk-off win of the year. But he also had a big homer to tie the game against the White Sox. Swish hit better earlier in the game, though he still had 83 total bases in innings seven on, more than Jorge, A-Rod, and Melky, and just behind Damon and Jeter.

In celebration of the Yankees late-innings performances, we have this: