The 2014 season is over and it’s time to look back at the year that was. Our old What Went Right/Wrong format has gotten stale, so it’s time for a new review format. We’ll review individual players, performances, tendencies, all sorts of stuff in the coming days and weeks.

By just about any measure, last season was the worst of CC Sabathia’s career. He did manage to soak up 211 innings and that’s worth something, but he ranked 76th with a 4.78 ERA and 72nd with 0.3 bWAR out of 81 qualified starters. Sabathia led baseball with 112 earned runs allowed and his 2.69 K/BB fell off big time from the 4.48 K/BB ratio he put up in 2012. It was an awful season and everyone and their mother had theories why CC dropped off so much.

Despite the terrible year, there were some reasons to believe Sabathia would rebound this year, specifically that he was a year out from elbow surgery and would have a normal offseason. He was also working to add a cutter. I, personally, also thought he couldn’t possibly be any worse. Maybe he wouldn’t get back to being an ace but he would be a serviceable mid-rotation horse, someone who soaked up a boatload of innings and was league average or better at preventing runs. I would have taken that in a heartbeat.

Instead, Sabathia did get worse in 2014. He got worse and he got hurt. Sabathia made just eight starts for the Yankees this summer and threw only 46 innings — he failed to complete six full innings of work three times, equaling his total from 2011-12 combined — with a 5.28 ERA and 4.78 FIP. It all started in the first inning of the first game of the season too. The Astros (!) tagged Sabathia for four runs in the first inning on Opening Day and only twice in those eight starts did he allowed fewer than four runs.

There were flashes of Sabathia figuring it out but one of the ways we cope with Ace Sucking Syndrome (ASS) is over-analyzing the hell out of every little thing. I did it. More than once. But none of the positive signs — the times he’s retired 12 in a row in the middle of a start, stuff like that — meant anything in the end. Sabathia was getting bombed on the regular, allowing ten homers in those 46 innings (1.96 HR/9 and 23.3 HR/FB%). Hit Tracker says those ten homers averaged 403.1 feet, so they weren’t wall-scrapers.

Sabathia’s season came to an end following his May 10th start against the Brewers, when the Yankees placed him on the disabled list with fluid in his twice-surgically repaired right knee. He was expected to return in June or July and he actually did go out on a minor league rehab assignment at one point — I completely forgot about that — but Sabathia eventually suffered a setback. It was feared he would need career-threatening microfracture surgery after a stem cell treatment didn’t work, but additional tests showed he only needed the knee cleaned out. Either way, his season was over.

If you’re looking for a silver lining in Sabathia’s season, it’s that both his strikeout (9.39 K/9 and 23.0 K%) and walk (1.96 BB/9 and 4.8 BB%) rates were stellar. He also got a lot of ground balls (48.0%). That’s all well and good, it’s better than having crappy peripherals, but Sabathia’s struggles are rooted in the type of contact he allowed, which was routinely hard. Unfortunately there is no publicly available data measuring this stuff. Line drive rates are fickle — his 22.1% liner rate was in line with the last four or five years anyway — because of scorer bias. All we have is anecdotal evidence and that sucks.

What we do know is that Sabathia’s velocity continued to trend downward — he averaged 90.76 mph in 2014, down from 92.36 in 2013 and 93.31 in 2013 according to Brooks Baseball — and that’s completely expected since he’s a 34-year-old with nearly 3,000 regular season innings on his arm. Velocity loss is inevitable and not reversible. That’s life. It happens to everyone. Sabathia’s location was ever so slightly worse than it had been, particularly when it came to grooving pitches over the plate (via Brooks): 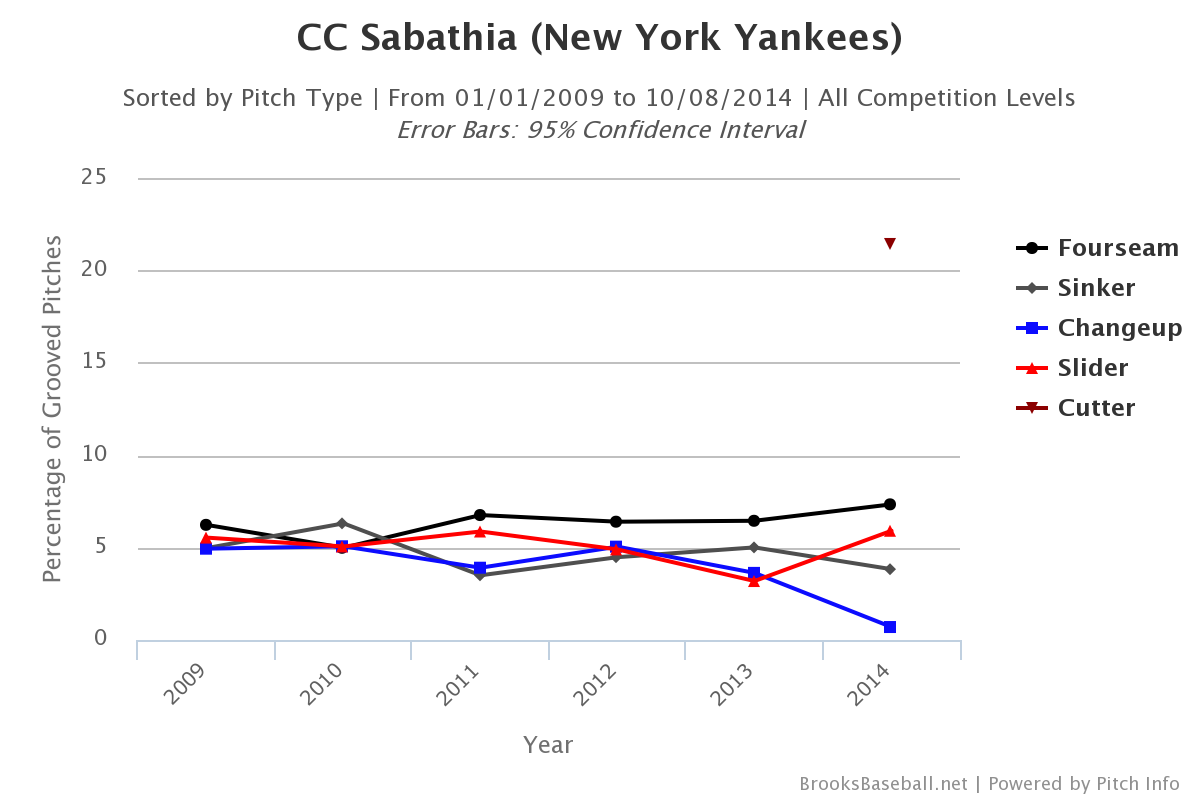 You can get away with grooving ~6.5% of your fastballs like Sabathia did from 2011-13 when you’re throwing 93+. In his limited time this year he grooved 7.3% of his fastballs while averaging just north of 90 mph and that’s a big difference. Since 2010, opponent’s slugging percentage against Sabathia’s fastball has steadily reason from .373 to .447 to .479 to .486 to .722 (!) this year. Obviously there’s some sample size noise in there, but the point stands. Hitters are getting mighty comfortable in the box against CC.

The location issues — it seemed like whenever Sabathia missed, he missed up in the zone and/or right out over the plate — could stem from lots of stuff. There’s a million variables here. He could be overthrowing to compensate for lost velocity, his landings could have been sloppy because his knee was unstable, his mechanics could have been out of what for whatever reason. I’m sure all of that and more have contributed to his problems. Sabathia’s release point has been steadily dropping over the years (via Brooks) … 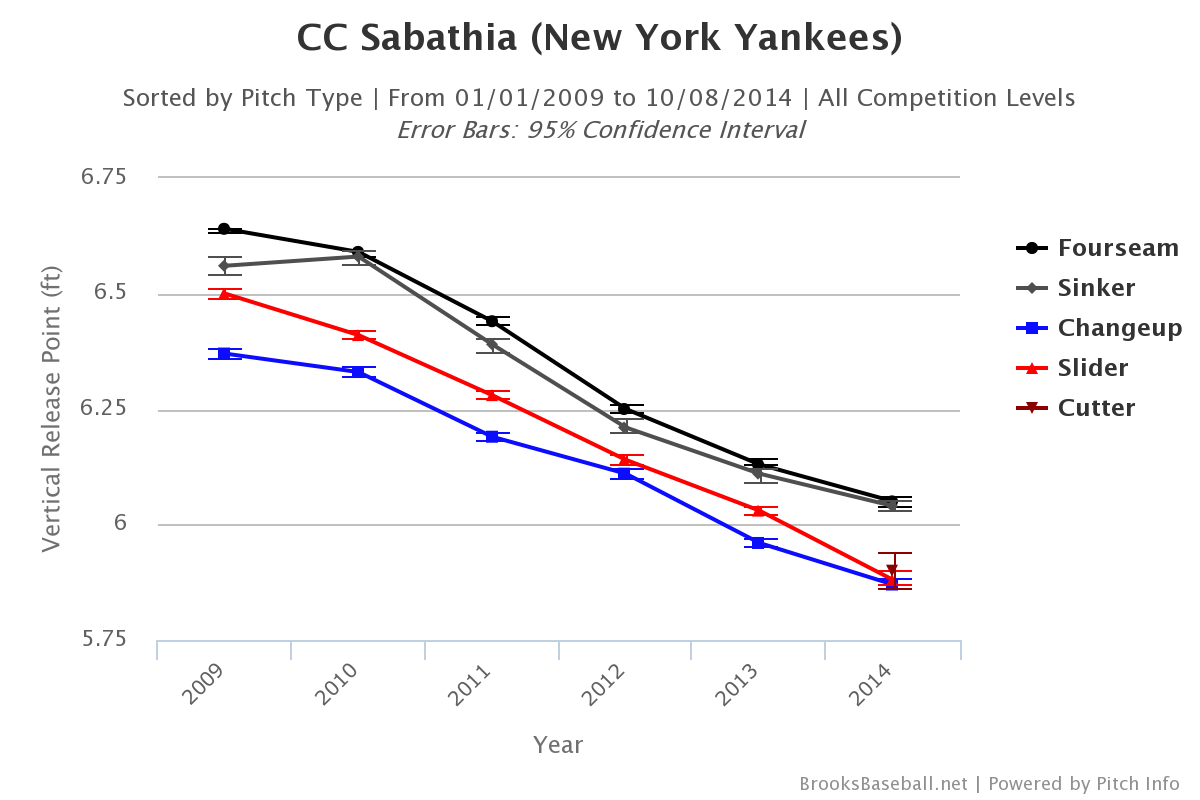 … which, again, is fairly common among pitchers his age, especially with that workload. At some point your shoulder just isn’t strong enough to maintain your arm slot. Sabathia’s dropped his arm over time and that at least partially explains the extra cut we see on his pitches from time to time. Extra cut that usually took the pitch over the plate and into the happy zone for hitters. We saw plenty of that last year and we saw plenty of it again this year. He had the same issues as last season only worse.

Sabathia had his knee cleaned out in August and soon thereafter had a second stem cell treatment (as planned). We recently learned he has started throwing and will soon get back up on a mound before shutting it down for the winter and going through his usual offseason routine. I love CC, he’s one of the my favorite Yankees of all-time, but I learned my lesson last year and I’m not expecting a bounce back next year. I’m not expecting anything. If he comes back and dominates with a healthy knee, that would be awesome. If he comes back and is a league average inning eater, great. If he comes back and stinks again, well that’ll stink, but that’s sorta what I’m expecting at this point.

The Yankees are stuck with Sabathia for another two years and possibly a third — his 2017 vesting option is based on the health of his shoulder, not his knee — so they have to hope this knee surgery helps him get back to being a useful pitcher. Sabathia is a tough dude who has pitched through knee problems and a bone spur in his elbow these last few years and I have not doubt that if he fails and is again one of the worst pitchers in baseball, it won’t be for a lack of effort on his part. The Yankees have a lot of uncertainty in their rotation heading into next season and, after both this year and last, Sabathia is a huge part of that uncertainty.