Now that the Yankees know their dominant bullpen will feature only two elite relievers rather than three, the focus turns to the rotation, which needs quite a bit of help given all the injury concerns. The idea of relying on the Dellin Betances-Andrew Miller tandem in the late innings only works if the starter can get through the first six or seven innings, and right now I’m not sure if the Yankees have anyone capable of doing that.

Behind Max Scherzer and Jon Lester, the consensus third best pitcher on the free agent market this winter is ex-Rays right-hander James Shields. He’s older than Scherzer and Lester but is still outstanding and will command a hefty contract. Shields is also a top of the line workhorse and the Yankees sure could use someone they could count on for innings. Let’s see if he makes sense for New York given their pitching situation.

Outside of an ugly 2010 season in which he was alarmingly homer prone (1.50 HR/9 and 13.8 HR/FB%), Shields has been outstanding these last few seasons. He was very good but not truly elite with the Rays from 2007-09 before that down 2010, but since them he’s been dynamite. Here are the stats:

Like I said, Shields has been consistently excellent since that ugly 2010 campaign. The declining strikeout rate is a red flag, especially since the league average strikeout rate continues to increase year after year, but there appears to be a perfectly valid non-decline explanation for the lack of strikeouts, which we’ll look at in the next section. Otherwise you’re getting everything you could want from a pitcher — innings, few walks, lots of grounders, no platoon split, the works. In summation: Shields definitely has a G Factor of 1.

Unlike Scherzer, Shields is not someone who will blow hitters away with high-end stuff. He doesn’t throw in the mid-90s, doesn’t buckle knees with a breaking ball, nothing like that. Shields succeeds because he throws five different pitches and consistently locates them in the lower third of the zone. In fact, among the 128 pitchers to throw at least 5,000 pitches over the last three seasons, Shields has 26th highest percentage of pitches in the lower third of the strike zone (and below) at 56.0%, according to Baseball Savant.

The strike zone continues to expand downward league-wide — this Jon Roegele post and this Jeff Sullivan post do a great job detailing recent strike zone expansion — so it’s easier to get a called strike at the knees (and below!) than ever before. Having the ability to keep the ball down like Shields is a great weapon. Nowadays hitters have to swing at these pitches to protect the plate and very few can hit balls that far down in the zone with authority. The result is a lot of weak contact and that’s a big reason why Shields is able to continually outperform his FIP.

As for his actual stuff, Shields does throw five pitches regularly, but his pitch selection did change a bit when he got to Kansas City two years ago. Check it out (via Brooks Baseball): 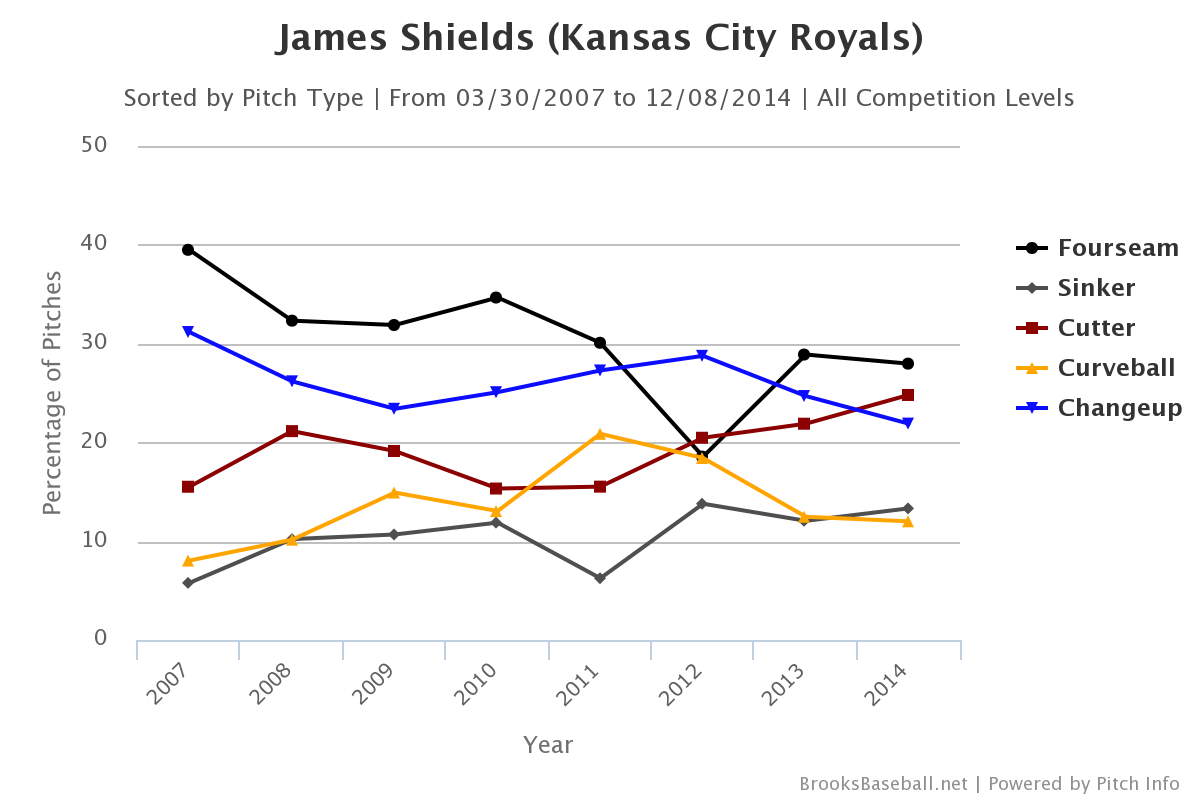 For whatever reason, Shields scaled back the usage of his changeup and curveball while with the Royals and instead ramped up the use of his cutter. The changeup was his go-to pitch for the early part of his career, he sold it extremely well (meaning it looked like a fastball out of his hand) and the pitch tumbled right off the table. It was devastating. The curveball is a good strikeout pitch in general. Certainly moreso than the cutter.

Fewer changeups and curveballs could explain why Shields’ strikeout rate has dropped the last two years, his only two with the Royals. Let’s look at the swing-and-miss rate of his five pitches over the last few years:

The changeup and curveball have been, by far, Shields’ best pitches for swings and misses over the last few years. The cutter is trending in the right direction and is it starting to catch up a bit, but there’s still a comfortable gap between that pitch and the other two. So this makes sense then, right? Shields has thrown more cutters but fewer changeups and curveballs during his two years in Kansas City, which is why his strikeout rate is down. We can’t really prove this but it certainly sounds plausible, doesn’t it?

I spent some time scouring the internet to try to figure out why exactly the Royals had Shields change his pitch selection — or whether he did it on his own — but came up empty. Maybe they wanted him to pitch to contact and get quick outs? Unless there’s some sort of underlying physical reason why he can’t throw his changeup or curveball as much anymore — I guess that if his elbow barking, it could explain fewer curveballs, but I’m not sure what would physically prevent a pitcher from throwing changeups — Shields should be able to use those pitches more in the future and boost his strikeout rate a few percentage points.

Otherwise Shields’ stuff has held up remarkably well over the years. In fact, his velocity increased this past season. Check it out: 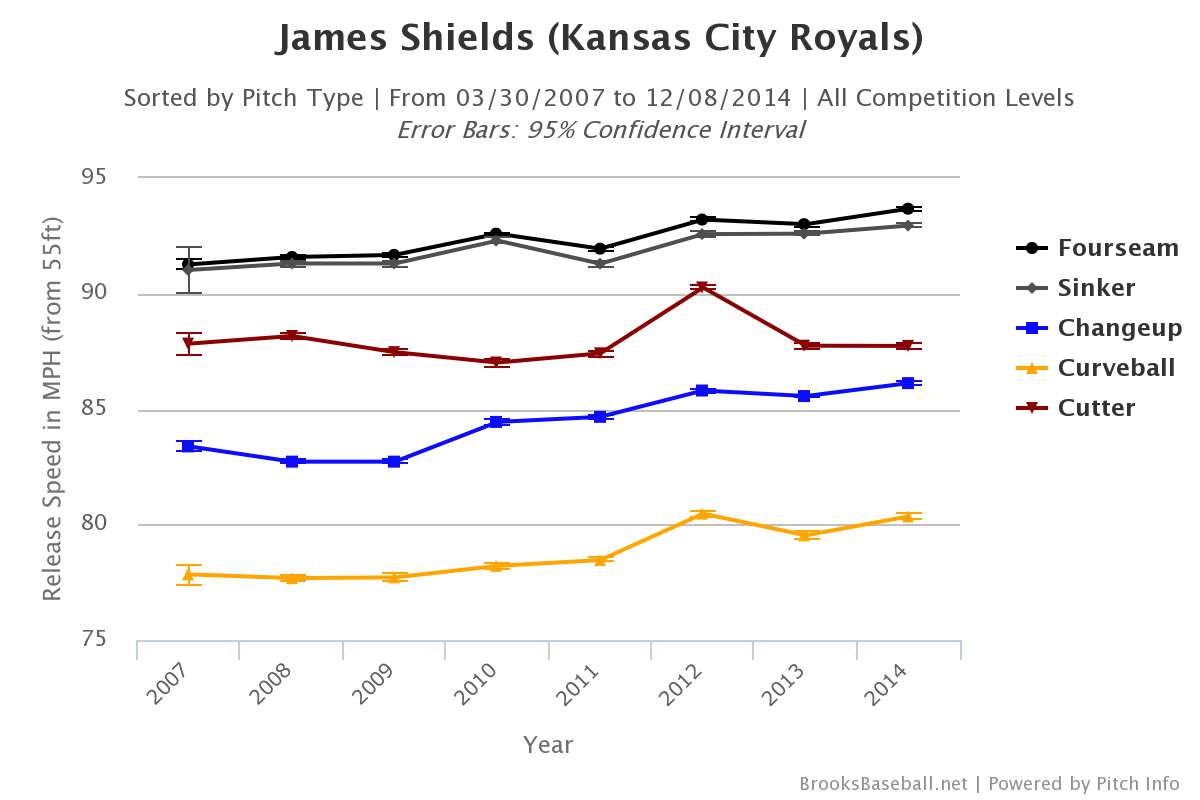 Not often you see a soon-to-be 33-year-old pitcher add about seven-tenths of a mile an hour to his pitches, especially not when they’ve thrown as many innings as Shields. Hey, maybe throwing fewer changeups and curveballs allowed him to better build and maintain arm strength throughout the season. Who knows. Either way, Shields’ stuff is more than fine. No red flags here.

Like I said, Shields has thrown a ton of innings so far in his career. He missed the entire 2002 season in the minors due to major shoulder surgery but has otherwise thrown at least 200 innings every year since 2007 and at least 220 innings in each of the last four years. The guy is a bonafide horse. Shields has taken the ball every fifth day and gone deep into games his entire career now. He’s never been hurt aside from that 2002 shoulder issue. It’s pretty remarkable.

Shields has thrown just short of 2,000 careers innings to date (1,910.1 to be exact), so I wanted to see how other recent pitchers with similar workloads fared later in their careers. Since 1990, 40 pitchers other than Shields threw at least 1,800 innings before the age of 33, and 26 of those 40 have finished their careers. Excluding Daryl Kile, the remaining 25 pitchers averaged 2,080.1 innings and 36.3 bWAR before their age 33 season. But, starting with their age 33 season, they averaged only 586.2 innings and 7.2 bWAR the rest of their careers. That’s scary. (Here’s my spreadsheet.)

Now, I think we can all agree Shields is more Mike Mussina and Andy Pettitte than Jeff Suppan and Jaime Navarro, but what if he’s Brad Radke? Or Andy Benes? Those guys were workhorses earlier in their careers and completely done after 32. Like done done. Without warning too. What if he’s Barry Zito or Kevin Appier? Healthy enough to continue pitching but simply not any good? That’s the risk whichever team signs him is going to take.

The Royals did make Shields the qualifying offer, so he will cost a draft pick to sign, but that’s only a minor consideration when talking about a player of this caliber. No team will lose sleep over forfeiting a pick to sign a high-end starter. Here are some contract estimates from around the web.

The offseason has been very quiet for Shields so far. The same is true for Scherzer. It seems like everyone was waiting for Lester to come off the board before turning their attention to the rest of the pitching market. The Giants and Marlins are said to have some interest in Shields but that’s all right now. Check out his MLBTR archive if you don’t believe me.

I think Shields is going to wind up with something like five years and $100M, right in line with the estimates. That’s basically the A.J. Burnett and John Lackey contracts from a few years ago adjusted for inflation. He’s not young and there are a ton of miles on his arm, but he is excellent and would be a major short-term upgrade for a contending team. Whoever signs Shields will be focused on winning in 2015 and 2016, not worrying about how the deal will look in years four and five of the contract. He makes the most sense for a win now team, basically.

Between his performance, his stuff, and his injury, Shields carries no red flags whatsoever. The only concern is his career workload to date and the expectation that it will eventually catch up to him and he’ll break down. After everything that’s happened with CC Sabathia these last two years, it’s hard not to be concerned about Shields’ workload. (To be fair, Sabathia threw way more innings at a young age than Shields.)

Shields would help the Yankees the way he would help every team. There’s not a rotation in baseball that wouldn’t get better by adding him. The contract figures to be shorter than the massive pacts Lester and Scherzer will receive, but you’re also getting fewer of his theoretical prime years. After all, is seven years for 30-year-old Lester or Scherzer all that different than five years for 32-year-old Shields? You’re getting a similar chunk of his career minus some peak years. Shields offers AL East pedigree and is a reliable innings guy, so that alone makes him a good fit for New York. Whether the price is right is another matter.

Rosenthal: Brandon McCarthy close to four-year deal with Dodgers
Yankees take no one, lose no one in 2014 Rule 5 Draft