River Ave. Blues » Swinging early in the count may be Yankees’ best chance against Dallas Keuchel
Refsnyder, Heathcott, Sanchez all make Wildcard Game roster
Attacking Altuve: Tanaka has to get the ball down and in

Later tonight the Yankees will face Dallas Keuchel in the winner-take-all wildcard game. If I had to hand-pick any pitcher in the big leagues to face the Yankees in an elimination game, I’m pretty sure I’d pick Keuchel. He’s the embodiment of everything the Yankees seem unable to solve, and by that I mean he’s a left-handed finesse guy with a changeup and command. If he were a rookie too, forget it. Game over.

Anyway, the postseason is not easy, and if you’re going to win the World Series, you have to beat pitchers like Keuchel. He’s a legitimate Cy Young candidate, and while he will be working on three days’ rest of the first time in his career tonight, I’m not sure fatigue will be a huge issue. Keuchel will have plenty of adrenaline pumping in his first career postseason start. Solving Keuchel is no easy task. Few teams have done it this year. Here’s a look at how the Yankees may be able to do it.

This seems like a convenient place to start. I absolutely believe certain hitters can “own” certain pitchers and vice versa, but head-to-head stats don’t help us identify those matchups well. We’re usually talking about only a handful of at-bats spread across several years. That said, Joe Girardi relies on head-to-head data all the time, and I’m sure it’ll factor into his lineup decision. Here are the numbers, via Baseball Reference:

This is Keuchel’s third full season in the big leagues and only his second as a full-time starter, so it’s no surprise the head-to-head plate appearances are limited. He’s not even in the same division. Keuchel totally dominated the Yankees in two starts this season (16 shutout innings with 21 strikeouts), so it’s no surprise the head-to-head numbers aren’t good. How much does this tell us going into tonight? Not much really. Keuchel is very good. We knew that already.

Keuchel is not a power pitcher. His fastest pitch of the season was 94.9 mph back in May. He hasn’t throw a pitch over 92.0 mph since August, so says PitchFX. Keuchel is a four-pitch pitcher with a sinker right around 90 mph, a cutter in the upper-80s, and both a slider and changeup right around 80 mph. He’ll occasionally throw an upper-80s/low-90s four-seamer as a get me over pitch. Words don’t do much, so here’s some video of Keuchel in action this season.

As you can see, he locates just about everything to both of the plate, and everything seems to break late. I have no idea how to quantify this, but my guess is all of Keuchel’s pitches look the same out of his hand. He must be real tough to pick up.

Like most pitchers, Keuchel attacks early in the count with his fastball (sinker, in his case) then goes to town with his offspeed stuff. The changeup is for righties but he will throw the slider to both righties and lefties. Here’s his pitch usage breakdown by handedness, via Brooks Baseball: 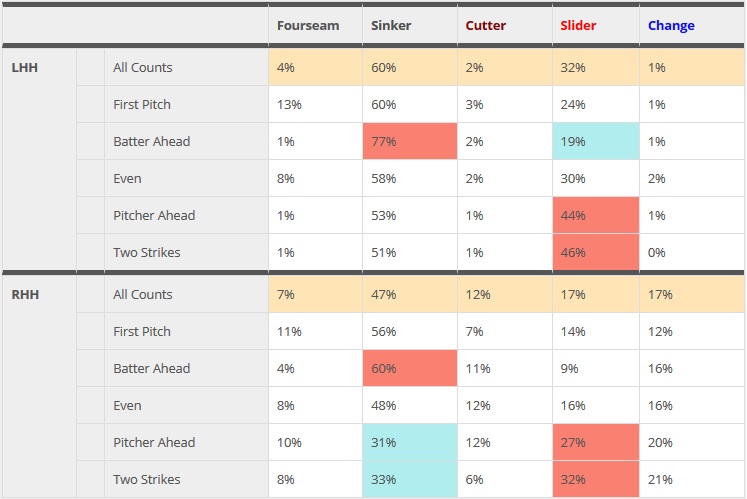 I know we’re all used to the “take pitches, work the count, get the pitch count up” approach and it is pretty successful, by and large. The Yankees tried it against Keuchel in his two starts this season, at least early in the game, but it didn’t work. He fills the strike zone then goes to his offspeed stuff when ahead in the count.

Considering the data shows Keuchel throws a lot of first pitch sinkers, I think it might be worth it to forget the whole “work the count” approach and instead look to ambush some sinkers early in the count. Opponents hit .307 with a .119 ISO on the first pitch against Keuchel and .291 with a .148 ISO when putting one of the first two pitches of the at-bat in play. From the third pitch of the at-bat onward, opponents hit .187 with an .077 ISO against Keuchel this year. Big difference!

Of course, the “swing early in the count” approach could very easily backfire, especially if Keuchel has his sinker working. If those early count swings don’t turn into hits, the Yankees are going to look up in the fourth inning and see Keuchel’s pitch count in the 30s or 40s. That would be a problem. The data suggests Keuchel is going to throw his sinker early in the count. If he’s leaving the pitch up in the first inning, it might be time to swing away early in the at-bat.

As a lefty, Keuchel has an inherent advantage when it comes to shutting down the running game. He’s staring at the base-runner at first base the entire time. Opponents attempted only five stolen bases against Keuchel this year — all five were successful! — and only 31 in his 671 career innings. That’s nothing. Teams don’t run on him.

This seems like something the Yankees might be able to exploit, right? Specifically Jacoby Ellsbury. (I think Brett Gardner’s going to sit in favor of Chris Young tonight, but we’ll see.) Ellsbury attempted only eleven stolen bases after coming off the DL, but three of them came in the last two weeks of the season. He was successful all three times. So at least he started to run a little more late in the year.

Ellsbury’s quick and usually an aggressive base-runner, and Keuchel is not going to throw over to first base all that often. Considering opponents never run on him, I’m guessing Keuchel varies his times well and has a quick slide step, but Ellsbury can generally outrun that stuff. He’s an elite base-runner when healthy. Pushing the envelope on the bases, even with something as simple as taking a bigger than usual lead, could be in the cards. That assumes Ellsbury actually gets on base against Keuchel, who dominates lefties.

Keuchel is starting on three days’ rest for the first time … as a big leaguer. He did it in college when Arkansas went to the 2009 College World Series. Doing it in the big leagues is different than doing it in college, sure, but it’s not a completely new experience to him either. The Astros wouldn’t throw him out there if they didn’t believe he was up for it.

“I can’t really tell you maybe (the adrenaline is) going to help me throw 91 instead of 90. I don’t know,” said Keuchel to reporters yesterday. “It’s a big game. So I’m sure I’ll be up for it no matter what. But at this point in time, the routine is there. I feel comfortable going in. I feel great. There’s no end-of-the-season fatigue, I feel like. So I’m excited.”

How will we be able to tell whether Keuchel is fatigued? Boy, I have no idea. Wildness and reduced velocity would be one way, but that’s about it as far as the eye test goes. We could look at the PitchFX data and compare release points and movement and things like that, but that doesn’t help in real time. The hitters will tell us if Keuchel is fatigued. Are they taking comfortable swings? That’ll be the best indication.

In a winner-take-all game, I can’t imagine Astros skipper A.J. Hinch will leave Keuchel out there long if he thinks he is fatigued and unable to compete at a high level. The Yankees should just forget about the short rest thing as far as I’m concerned. Assume Keuchel is at 100% and won’t lose anything as his pitch count climbs. This is no game to get caught waiting around.

There’s no denying Keuchel is a tremendous pitcher. He’s a bonafide ace with unconventional methods. Keuchel dominates by keeping the ball on the ground, not by missing bats or blowing the ball by hitter. He has struggled on the road this season — struggled is a relative term, Keuchel had 1.46 ERA (2.04 FIP) at home and a 3.77 ERA (4.01 FIP) on the road in 2015 — and he will be working on short rest, which may or may not come into play.

The Yankees have seen Keuchel twice this year, and while he dominated them both times, getting two looks at him has value. They’ve seen him up close. There’s no mystery. (Or at least there’s less of a mystery.) It appears hunting sinkers early in the count may lead to positive results, and if Ellsbury gets on base he should take an exaggerated lead given Keuchel’s lack of pickoff throws. Other than that, hope Keuchel has an off night. He’s tough.

Refsnyder, Heathcott, Sanchez all make Wildcard Game roster
Attacking Altuve: Tanaka has to get the ball down and in