River Ave. Blues » The Erstwhile Catcher [2016 Season Review]
Fan Confidence Poll: October 17th, 2016
Andrew Miller has been brilliant this postseason, but that doesn't mean the Yankees should regret the trade

The Yankees are built around left-handed power and strong defense. That’s the plan, anyway. They want guys who can yank a ball into the short porch while adding value in the field. For the most part, no one fits that mold better than Brian McCann, the club’s starting catcher coming into 2016. He has that lefty pop and has long been a good defender.

After starting the season as the undisputed No. 1 catcher, McCann finished the 2016 season as the Yankees’ primary DH. And it wasn’t because he didn’t perform. The Yankees fell out of the race and focused on youth in the second half, which meant Gary Sanchez got priority at-bats behind the plate. McCann had his role reduced because, well, how else is Sanchez supposed to play?

The First Few Months as a Catcher

The Yankees had a really hard time scoring runs for the first four or so months of the season. The offense is the single biggest reason they missed the postseason. No doubt about it. McCann was not part of the problem. He performed as expected prior to the trade deadline. McCann had that 107 wRC+ in his first 324 plate appearances after having a 106 wRC+ last year. He held up his end of the bargain.

After trading Beltran and other veterans at the deadline, the Yankees turned things over to their young players, and that meant lots of playing time for Sanchez. The team wasn’t subtle about it either. Sanchez was called up on August 3rd, played two games at DH, then took over behind the plate. Starting August 5th, McCann started one of the next 16 games at catcher. He caught only eleven times in the final 54 games of 2016. That’s it.

Many veteran players would be upset about a young player taking their job at midseason, especially when playing well. Sanchez didn’t even take the job, really. The Yankees just gave it to him. It wasn’t until about a week after being installed as the starter that Sanchez’s home run barrage started. McCann had every reason and every right to be unhappy. If he was though, he never let it be known. He did nothing but praise Sanchez.

McCann’s numbers as a DH were actually better than his numbers as a catcher, though the shape of his production was different. He was a low batting average guy who hit for power as a catcher. As a DH, he hit for more average and less power, hence a .284/.373/.402 (114 wRC+) batting line. Only three of his 20 home runs came as the DH, but look at that batting average and on-base percentage!

In theory, McCann’s numbers should tick up as the DH because he’s free from the rigors of catching. At the same time, he had to make the adjustment to not playing as much. Sitting for 45 minutes or so between at-bats can be difficult when you’re used to playing defense. Especially for an ex-catcher who is used to being in on every pitch. McCann hit .174/.309/.261 (63 wRC+) in his first three weeks as the DH. It was .297/.356/.462 (121 wRC+) thereafter.

The Struggles Against Lefties

For the first time as a Yankee, McCann had a big platoon split this past season. He struggled against lefties while with the Braves, especially his final few years in Atlanta, but he figured them out a bit the last two years. This year … no luck. Here’s a quick graph of his left-right production: 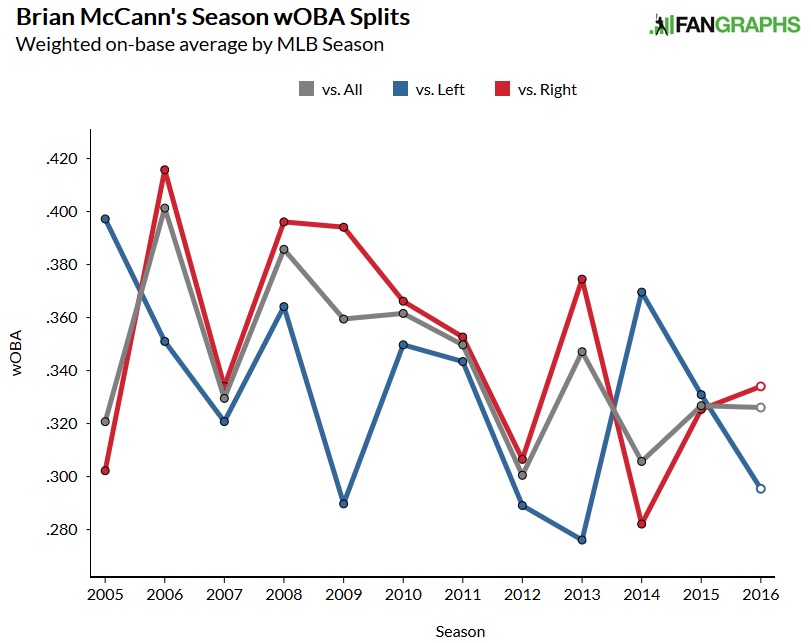 McCann’s above-average production against southpaws during his first two years in pinstripes was a nice little surprise. He hadn’t hit lefties much in the years prior, then bam, he was suddenly doing real damage against them. That didn’t happen this year. Based on the rest of his career, 2014-15 are the outlier, not 2016. McCann figures to need a platoon partner going forward, and it just so happens the Yankees have a pretty good righty hitting catcher on their roster.

The Rebound on Defense

The Yankees moved McCann from catcher to DH to give Sanchez playing time. McCann didn’t force the move by playing poor defense. I actually thought his defense was better this year than last year, based on the eye test. Last season McCann let what seemed like a lot of blockable balls scoot by. That didn’t happen as much this past season. Here are some catcher defense numbers:

One of those years is not like the others. FRAA, which is Baseball Prospectus’ attempt at an all-encompassing catcher defense stat, has rated McCann’s glovework as excellent in three of the last four years. Last year was the outlier, which jibes with what I saw while watching the games. Players have down years in the field the same way they have down years at the plate. It’s entirely possible 2015 was a down defensive year for McCann and nothing more.

The caught stealing numbers are interesting and we might have an actual explanation for them: Gary Tuck. Tuck, a longtime catching guru, was New York’s bullpen coach from 2014-15 and McCann credited him with improving his throwing. “Gary Tuck. He’s changed the way I catch and throw,” said McCann two years ago. “We work on it every day together. I’m getting the ball out quick. No wasted movement … I’ve gotten better as the season’s gone on.”

The Yankees let Tuck go last offseason, reportedly because he was at odds with the front office over the way they use analytics, and replaced him with Mike Harkey. McCann worked with Tuck in 2014-15 and was awesome at throwing out runners. He did not have Tuck around prior to 2014 or in 2016 and his throwing suffered. Correlation does not equal causation, but when the player says “this coach fixed this,” you kinda have to believe him.

Overall, McCann had a fine season defensively. A bounceback season, really. His throwing wasn’t very good — the MLB average was a 28.3% caught stealing rate — but he was above-average at the other aspects of catching. The Yankees didn’t move McCann to DH because his defense was inadequate. They moved him because it’s time to build a new young core and Sanchez is the future behind the plate. It really is that simple.

According to multiple reports, the Yankees listened to trade offers for McCann at the deadline, with the most serious interest coming from the Braves. Atlanta understandably did not want to take on much money or give up top prospects. The Yankees reportedly asked for Mike Foltynewicz and Ender Inciarte in return. No deal got done at the deadline but this definitely seems like something that will be revisited in the offseason.

McCann said he hopes to remain with the Yankees, for what it’s worth. And he does have complete control here. He has a full no-trade clause and if he wants to stay in New York, he will. Would he prefer to be a full-time catcher elsewhere or a part-time catcher and most-of-the-time DH with the Yankees? That’s a question we can’t answer and a question McCann probably can’t answer until he finds out where he might be going.

I’ve said this before and I’ll say it again: I think holding onto McCann next season would be a really good idea. Having two quality catchers* is a big plus, especially when they hit from opposite sides of the plate. At the same time, of course the Yankees should see what offers are out there. They’d be foolish not too. I just wouldn’t give McCann away though.

* Fun Fact: The 2016 Yankees were the third team in history with two catchers who each hit 20+ home runs. The 1961 Yankees (Elston Howard and Johnny Blanchard) and 1965 Milwaukee Braves (Joe Torre and Gene Oliver) also did it. Nice work, Gary and Brian.

Brian Cashman made it clear he values McCann highly at his end-of-season press conference, so if the Yankees do trade their erstwhile catcher this offseason, they’ll probably going to get a nice return. Quality catchers are so hard to find these days, and while Sanchez is clearly the catcher of the future, keeping McCann as a mentor and backup plan makes a world of sense to me.

Fan Confidence Poll: October 17th, 2016
Andrew Miller has been brilliant this postseason, but that doesn't mean the Yankees should regret the trade