Coming into the 2018 season, nowhere else on the field did I think the Yankees would have a bigger advantage over their opponents than at catcher. The only catcher who I was comfortable assuming would outproduce Gary Sanchez this season was Buster Posey, and even that was a little up in the air.

The Yankees called Sanchez up for good on August 2nd, 2016, following their trade deadline purge. Here’s where Gary ranked among all catchers from that date through the end of the 2017 regular season (min. 400 plate appearances for rate stats):

There was a weird little narrative floating around Spring Training that said, despite all their high quality players, Sanchez was the Yankees’ best hitter. I never really bought into it (folks, Aaron Judge is really freakin’ good) but it wasn’t the craziest thing in the world, I don’t think. Now? Now it sounds silly.

I guess the good news is Sanchez did hit two homers in ALDS Game Two, which helped the Yankees even the series at a game apiece. That’s more than anyone other than Judge did in the series.

Defensively, Sanchez again led the league in passed balls, this time committing 18 in 653 innings. Last year it was 16 in 881 innings. He struggled on both sides of the ball and was, hands down, the most disappointing Yankee in 2018. In fact, I’d call him the most disappointing player in baseball this year. Who else flopped so greatly after going into 2018 with such high expectations? I can’t think of anyone.

That the Yankees won 100 games despite Sanchez’s awfulness is a testament to their talent and depth and in no way absolves Gary. Who knows where the Yankees would’ve wound up had Sanchez played up to expectations? Let’s dig into Gary’s disaster season.

Power, But Little Else

I know everyone wants to talk about the defense and passed balls, but we’ll get to that in a moment. We have to start with the offense because Gary will forever be a bat first player, and this season he was terrible with the bat. You saw the overall batting line: .186/.291/.406 (89 wRC+) in nearly 400 plate appearances. The 18 homers salvaged things a bit — even with all the missed time, Sanchez still had the fifth most homers among catchers — but the AVG and OBP? Yuck. 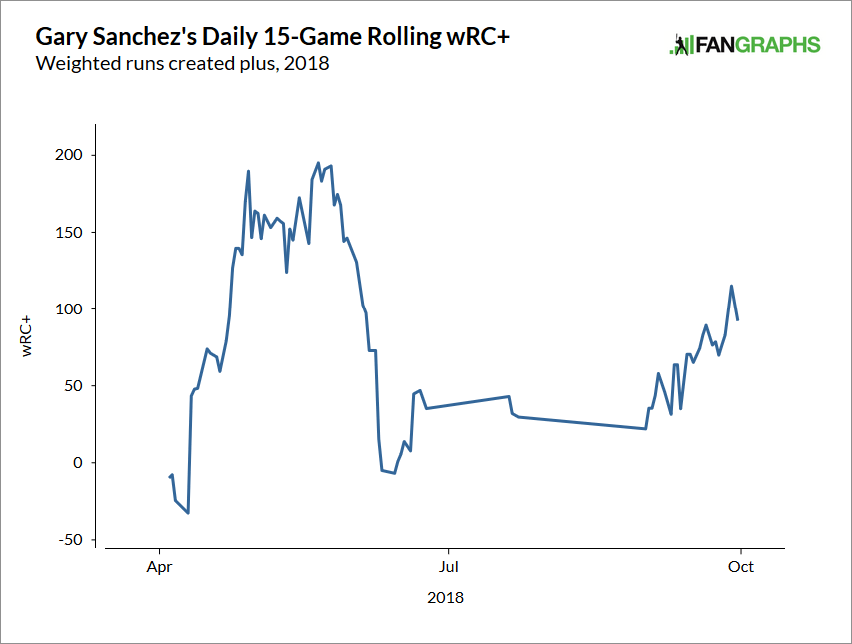 Throughout the season I saw two common explanations bandied about for Sanchez’s struggles: He chased out of the zone too much and he got too pull happy. Possible! Except Sanchez posted the lowest chase rate (33.1%) and lowest pull rate (51.1%) in his relatively brief big league career. That doesn’t mean Sanchez didn’t chase too often or get too pull happy at times — both those rates are above the league average (30.4% and 40.3%) — it just means this wasn’t as big a problem as it may have seemed.

Expected weighted on-base average, or xwOBA, is based on exit velocity and launch angle and things like that. It essentially tells us what a player would be expected to produce based on the quality of his contact. Sanchez hit the ball quite hard this year, yet his expected production was relatively low. Statcast has all sorts of neat batted ball breakdowns that help explain why.

Here’s the full definition of a barrel. The short version: It’s the best possible contact. High exit velocity at an ideal launch angle. Sanchez, even this year, squares balls up at an extraordinarily high rate. More than double the league average, in fact. The 18 home runs and overall power production tell us Gary still made a lot of loud contact this year. When he squared a pitch up, he absolutely crushed it.

The biggest difference between 2017 Sanchez and 2018 Sanchez is that a lot of flares — those are balls that are not necessarily well struck, but do fall in for hits — were replaced by pitches Sanchez either topped or got under. You can hit a ball hard and still hit a grounder. A topped ball is a weak grounder. And getting under a pitch is, well, getting under a pitch. A pop-up or a routine fly ball. Replacing flares with topped pitches and getting under the ball is how you go from a .304 BABIP in 2017 to a .197 BABIP* in 2018 like Sanchez.

* Reliable stat keeping goes back far enough that there are 21,946 player seasons of at 300 plate appearances on record. Sanchez’s .197 BABIP is 33rd lowest among those 21,946 seasons. Insane.

The two disabled list stints probably didn’t help matters — including minor league rehab, Sanchez had 46 plate appearances from June 24th through August 31st — but my theory is Gary launch angled himself out of whack at the plate. I think he sold out for power and I think it got worse as the season went on. There were times it looked like Sanchez was trying to hit a five-run home run to make up for his entire season in one at-bat. I think he sold out for power, threw himself into a mechanical funk, then started pressing when he wasn’t having the season we all expected, and that made it all worse.

A few pieces of good news. One, Sanchez was still able to hit the ball hard. I’d be much more worried going forward if he wasn’t hitting the ball hard. The ability to drive the ball like few others is still in there. We saw it in the postseason. Two, Sanchez’s strikeout rate didn’t explode this year. He finished the year with a 25.1% strikeout rate, which is higher than last year (22.9%) but not outrageously so. A strikeout rate nearing or above 30% would’ve been worrisome.

And three, Sanchez really upped his walk rate this year. His 12.3% walk rate is far higher than last year’s 7.6% walk rate. Gary drew 40 walks (one intentional) in 525 plate appearances last year. He drew 46 walks (zero intentional) in 374 plate appearances this year. I don’t think there’s a physical deficiency here. It’s not like Sanchez lost strength. The adjustment this offseason figures to be more mechanical and more about approach.

“They were pitching me very tough throughout the whole season. They were executing very good pitches that were out of the strike zone, but I was swinging at them,” said Sanchez to Randy Miller a few weeks ago. “That’s one of the things that I want to work on in the offseason. Command the strike zone better. Be a more selective hitter.”

“I had a chance to stop all of them. I just didn’t do it,” Sanchez said after the game. “(Luis Severino and I) definitely had some trouble getting on the same page in the first inning. I would say there were some pitches there that I should have done a better job blocking or protecting them from going to the back.”

It’s easy to make excuses for Sanchez’s poor blocking. For starters, the Yankees have a pitching staff that isn’t easy to catch. The Yankees had the highest average fastball velocity (94.9 mph) and third highest average breaking ball spin rate (2,517 rpm) in baseball this year. That’s a lot of high-octane heaters and a lot of high-spinning breakers. Catching this pitching staff is not easy.

Secondly, MLB limited mound visits this season and that means fewer conversations — remember how often Sanchez visited the mound last year? — and thus greater potential for cross-ups. We saw a lot of them this year with Gary behind the plate. And third, pretty much every team is paranoid about sign-stealing this days and uses multiple signs with no one on. That also increases the chances of a cross-up and a ball getting by the catcher. I mean, look at the postseason. There seemed to be two or three balls getting by the catcher every game.

All of that should be considered when evaluating Sanchez’s blocking. Now, that all said, he is still really bad at it. People are quick to call Gary lazy the same way they were quick to call Robinson Cano lazy (gee, wonder what the connection is there) but, to me, this is a technique problem more than anything. For example, I have no idea what Sanchez is doing with his right leg here:

He does that all the time. Gary rarely drops to both knees to block pitches in the dirt, and instead leaves his five-hole wide open, and balls skips through. That has to be corrected. It won’t solve all of Sanchez’s passed ball issues — we’ve seen plenty of catchable pitches inexcusably clank off his glove — but it’ll help cut down on them, undoubtedly. The Yankees have three former catchers on the coaching staff (bench coach Josh Bard, catching coach Jason Brown, and assistant hitting coach P.J. Pilittere) and fixing that leg and improving Sanchez’s technique has to be a priority.

I suppose the good news is that, if you’re going to be (very) bad at something defensively as a catcher, blocking pitches a “good” thing to be bad at. Baseball Prospectus has detailed catcher defense stats and the best blocker (Tucker Barnhart) finished at +3.6 runs saved in 2018. The worst (Omar Narvaez) was at -4.6 runs. In one individual game, that extra 90 feet can be huge. Over the course of the season, blocking is not he most impactful thing in the game.

Kinda weird the throwing runs total is so low, isn’t it? James McCann led the league at +1.1 and Robinson Chirinos was last at -0.8. Huh. Well, whatever. (For what it’s worth, FanGraphs has Sanchez eighth with +2 throwing runs.)

These are counting stats, so Sanchez’s framing and throwing is hurt by the missed time while his blocking would’ve surely ranked last in the league had he played more. Point is, Sanchez is quite good at everything behind the plate except blocking. He frames well and he throws well, and the Yankees believe he calls a good game.

“I think he’s our best game-caller,” said Brian Cashman to Randy Miller a few weeks ago. “He shuts down the opposing team’s running game. And obviously, he’s a threat at the plate every pitch. So I think he’s by far our best option behind the plate for us.”

Gary stinks at blocking, and that’s kinda important, but it’s wrong to act like he offers nothing back there. He very clearly does. The throwing and framing are quite valuable. If you’re a believer in “pitcher performance with this specific catcher” stats, the pitching staff performed better with Sanchez (3.50 ERA and 93 OPS+) than either Austin Romine (4.06 and 104) or Kyle Higashioka (3.80 and 113) behind the plate this year. The Yankees have to help Gary improve his technique though. Whatever that is he’s doing with his right leg is costing him dearly.

Not surprisingly, teams are already calling about Sanchez. They see an opportunity to buy low on a 25-year-old catcher with four years of team control who was the best hitter at the position a year ago. If Sanchez were on another team, we’d all want the Yankees to go out and get him. Catcher is an extremely hard position to fill and few backstops in the game offer Gary’s long-term potential.

A year ago at this time Sanchez looked to be on the cusp of superstardom. Now he’s more of a reclamation project. Sanchez has to get right at the plate, first and foremost. There are some approach and (likely) mechanical issues that need to be fixing. That’s most important. Gary also has to continue working on his blocking. That’s the missing piece defensively. An offseason trade is so very unlikely, meaning Sanchez will report to Tampa for Spring Training in a few weeks as the No. 1 catcher, and, after the season he just had, he’ll be under the microscope more than ever before.