River Ave. Blues » Scouting the ALDS Opposition: Rick Porcello
With the season on the line, the bullpen has to be ready at the first sign of trouble behind CC Sabathia in Game Four
2018 ALDS Game Four: Red Sox at Yankees

Rick Porcello had his standard season in 2018, continuing his tradition of somewhat boring consistency. Take a look at his 2018 and career averages side-by-side:

His strikeout rates have been increasing gradually, but, with the exception of his Cy Young-winning 2016, Porcello has been the same guy year in and year out. And that guy has been effective against the Yankees throughout his career, posting a 3.11 ERA in 141.2 IP against the good guys, including a 2.31 ERA in 23.1 IP this season. Porcello’s four starts against the Yankees breakdown as follows:

It’s actually quite similar to Eovaldi’s splits, which I discussed yesterday – two ace-like performances, one dud, and an early exit in a meaningless game. And, much like Eovaldi, Porcello is seemingly better against the Yankees than any other team. Frustrating, isn’t it?

So how does Porcello ply his craft?

The 29-year-old righty is a five-pitch guy, working with a low-90s four-seamer, a low-90s sinker, a mid-80s slider, a low-80s change-up, and a mid-70s curveball. And that’s the mix that he’s worked with throughout his career – with one notable change in usage: 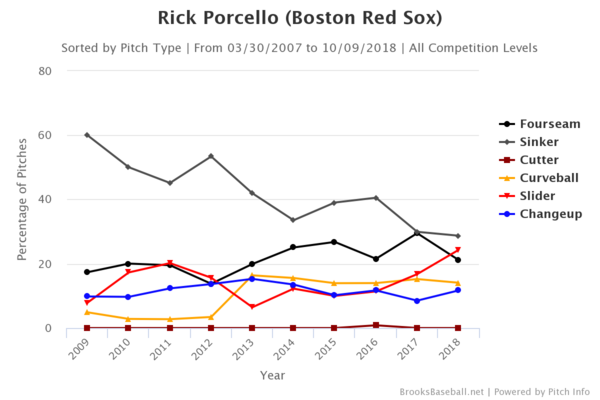 If Porcello pitched the Yankees differently than other teams, it doesn’t really show. Brooks Baseball has him down for zero four-seamers on April 12 – but that happened in starts against the Blue Jays and Astros, as well. And he threw his normal distribution of fastballs in his other three starts. He didn’t throw a single sinker on May 9 but, again, that’s not an isolated incident, and he made up for it in other starts. Porcello’s pitch usage varies greatly on a game-by-game basis, so it’s difficult to draw much of anything from such a vantage point.

It’s also worth noting that Porcello has historically thrived on extra rest, which is how he’ll be working tonight. He had a 2.56 ERA in 6 starts with 6+ days of rest this year, and has a 3.42 ERA in 48 starts with extra rest for his career. That being said, this isn’t quite extra rest, as he did throw 15 pitches on Friday. It may have been his normal throwing day, but there’s a huge difference between a bullpen session and pitching to Miguel Andujar, Gary Sanchez, and Gleyber Torres in a playoff game.

Porcello did fall-off in the second half this season, though. His ERA rose by 0.41 runs, his FIP jumped by 0.60, and his home run per flyball rate increased by 7.1 percentage points. He also has a career 5.33 ERA in 25.1 postseason innings, for what it’s worth. And – and this is a big ‘and’ – he’s a historically average pitcher. This isn’t an ace that has the Yankees number; this is someone that they’ve beaten up on before, and there’s no reason they can’t do so again.

With the season on the line, the bullpen has to be ready at the first sign of trouble behind CC Sabathia in Game Four
2018 ALDS Game Four: Red Sox at Yankees