During the Yanks’ game today we held the draft for the first ever RAB Fantasy Football League. It’s a ridiculously deep league, 20 teams total, but the draft flew by in a cool 2 hours. Most of the teams were present, I’d say at least a dozen or so. The later rounds were brutal, the definition of slim pickin’s. Cedric Benson and Shaun Alexander both got drafted, that’s how bad it was.

I had the 17th pick in the scissor style draft, so all the super-elite RB’s were long gone by time I picked. Anywho, here’s my squad, with draft round in parenthesis:

Honestly, I’m pretty happy with my team. Grant, Jacobs & Mendenhall are about as good a RB trio as I could have hoped for in a league this deep, and I can’t really complain about having Faulk as my number 4. I’m banking on Calvin Johnson continuing to expand on his superfreakdom, and I’m hoping Walter’s breakout last year was legit. If not, then I’m kinda screwed.

I was all set to take Jeff Garcia as my QB, but someone grabbed him a few picks before me, so I had to settle for Young. Pennington’s insurance, if nothing else. Not great, not horrific either. Todd Heap is Todd Heap, but someone grabbed Dustin Keller before I could get him for the bench. Baltimore’s bye week isn’t until Week 10, so I have time to grab someone off waivers.

The Chargers’ D is arguably the best in the business even with the question marks surrounding Merriman, so I was comfortable grabbing them in the 6th round. They don’t have a buy week until Week 9, so I can grab someone’s scraps to fill-in that week. Jason Hanson’s a good kicker, so I figured what the heck.

Like I said, I’m happy. That is until injury strikes.

Due to popular demand, we’re going to form the first ever RAB Fantasy Football League this year. The league is already set up at Yahoo (head-to-head, three weeks of playoffs, nothing crazy), and now we just need participants. If you’re seriously interested, email me at mike (at) riveraveblues (dot) com, and you’re in. Make sure you put “fantasy football” or something to that effect in the subject line. The league is limited to 20 teams (Joe & I are playing, Ben’s too scared), so first come first serve.

The draft is currently scheduled for 1pm EST on Sunday, August 31st (same time as the Yanks game), but I just realized that that’s the day before Labor Day, so I think I’m going to move it up to that Saturday (again, same time as the Yanks game). Let me know in the email what day works best for you. Please note that the comments are closed, so make sure you send me an email if you want in.

Update (6:00pm): The league is fill. I’ll keep you updated if someone drops out a spot opens up.

The Yankees suck. Or at least they do right now. They’re on pace for about 86 wins, which would be their lowest total since 1995, and the first time they’ve won fewer than 90 games since 2000. But enough of that, let’s forget about the Yanks for a night and talk some football.

So who’s going to throw more INT’s this year, Eli or Fav-ruh? Will D’Brickshaw break out this year? How much will the G-Men miss Shockey?

(h/t to Nady Nation for the topic)

Sportscenter is reporting it now, no linky yet here’s the link. Heh.

Personal Seat Licenses. We’ve heard about them as this amorphous concept for which people in other cities have to pay so that their teams can draw in more revenue. We know that some football teams charge outrageously high prices for what amounts to the right to buy tickets for certain seats.

And now starting in a few seasons, PSLs are coming to New York. The Giants, Super Bowl champions, have announced that every season ticket in their new stadium will be sold via PSLs. These prices for these PSLs will run from $1000 to $20,000, and these licenses serve as lifetime guarantees for that seat. It is a one-time payment of an arm and a leg.

I write about this briefly now because of the attention I’ve paid to Yankee ticket prices. Yes, the top seats new stadium is going to be expensive, but the prices are a far, far cry from those we see in other sports. A longtime RAB regular Steve wrote in about this story this morning:

To be fair to the Yankees you should comment on this. Can a regular guy go to see a Giant game anymore, or do you need to know someone? At least you can go to the Bronx with a buddy, have a couple of beers and be under the $300 mark.

Of course, the PSL issue and the price tag for a Giants game are seemingly two separate stories. Football games are very nearly prohibitively expensive and yet most teams have waiting lists that stretch on for years for season tickets. Why? Because they are only eight home games a season, and there is a limited supply for something in high demand. It isn’t affordable — of fun — to see the Knicks anymore.

In a way, this is the great irony of baseball and our complaints about ticket prices. As relatively expensive as it can be to go a Yankee game, it’s still pretty cheap. For example, I recently bought decent Tier Reserve seats for Monday night’s sold-out Yankees-Rangers game for a few bucks over face value off of StubHub. Never would I be able to do that for a Giants game.

For a while, fans have dreaded the PSLs. They fear that baseball teams will begin to sell them for season ticket holders in new stadiums, and sports business exports have guessed that teams could draw in upwards of $40 million off the bat for PSLs. The Cubs are debating it, and rumors have swirled around the Yanks’ ticket holder plans in the new stadium. But again, I think it’s a matter of economics. There are 81 home games, and if teams start charging seat licenses, season ticket holders may opt to buy on a game-by-game basis.

The economics of sports tickets is a prickly issue. Teams set prices; secondary markets set the true value. In the end, baseball remains one of our country’s more affordable sports, and we need to look only at the new Giants Stadium rising in New Jersey to remember why. 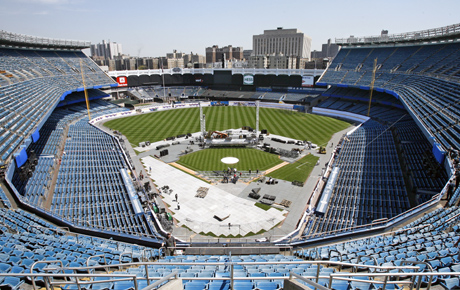 This photo — originated with the Yankees — is making the e-mail forwarding rounds right now. It’s the Stadium, mid-Papal setup. As you can see — click to enlarge — all of the Yankee Stadium advertising will be covered up before this weekend’s Mass at the Stadium. I wonder what song the Cardinals will all pick during the Yankee Jukebox segment after the top of the first inning.

Today’s a big day for politically minded residents of New York, Connecticut, Massachusetts, New Jersey and a number of other states outside of Yankee territory. I just wanted to take a brief second to urge you all to vote today. This election – whether it’s Clinton vs. McCain, Obama vs. Romney or any other combination of match-ups – will be a big one, and it all starts with the primaries. Polls in New York are open until 9 p.m.; polls in Connecticut and New Jersey until 8. To find your polling place and for more information, the City Room blog has a rundown. Vote.