The Yanks may have to look for a new Plan B. According to reports out of Toronto, the Blue Jays have offered to extend A.J. Burnett’s current deal by two years and $30 million, bringing his contract to four years and $55 million. Burnett can probably get a bit more on the open market, but he’s expressed his comfort with Toronto. While there’s no doubt that CC Sabathia is the better pitcher, if the Yanks were to miss out on both Burnett and the Brewers’ current ace, the off-season would start to look rather bleak. 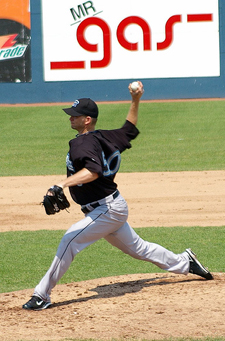 A topic we’ve hotly debated in the comments over the past few months is A.J. Burnett. He’s eligible to opt out of the five-year, $55 million deal he signed after the 2005 season, and most people think he will. After he made his final start of the 2008 season last night, many Blue Jays bloggers bid him adieu, admitting that the chances of his return are slim. The Jays are rumored to be negotiating an extension, but at this point, this close to free agency, it’s not probable.

It’s not difficult to concoct an argument against signing Burnett. He’ll be 32 for the start of the 2009 season, and will likely require a four- or five-year contract with an average annual value of around $15 million, possibly more. That’s quite a risk to take on a guy who has just three 200-inning seasons in his career — and followed two of them up with injury-shortened campaigns. In short, taking on Burnett would be a considerable risk.

One case I’ve heard for signing him is that he’s a Yankee killer, so it makes sense to have him pitching for us instead of against us. He does, after all, hold a career 2.43 ERA against the Yankees in 77.2 innings of work. That alone, though, isn’t good enough a reason to ink him. Yeah, he might hurt us if he’s pitching for another AL team, though that damage is far lessened by just getting him out of the A.L. East.

You know what other team he’s succeeded against? Yep. The Red Sox. In 56.1 career innings against Boston, he’s pitched to a 2.56 ERA, including a 2.60 mark over 27.2 innings this year. In four starts, two of them in Fenway, he allowed just two homers, striking out 24 and walking 13. They hit a paltry .206 against him this year, and have managed just a .212 average over his career.

Does this mean that we should sign Burnett? Hardly. It does provide another point for the team to consider, though. Not only does he pitch well against them, but he pitches well against the Sox — and wasn’t too shabby against the Rays this year, striking out 26 to 8 walks in 20 innings (3.15 ERA). Which, of course, makes me wonder if the Red Sox will be in on him. While I’m open to the idea of Burnett, I’m not too keen on a bidding war over him. I hope the Yanks front office isn’t, either.

The Yanks have been doing a lot of window shopping lately. They’ve been said to be looking at Damaso Marte, Jason Bay, and Xavier Nady of the Pirates. They’re supposedly keeping up with Freddie Garcia’s rehab assignment. Now we’re hearing, via MLBTR, that the Yankees are interested in A.J. Burnett. This shouldn’t come as a surprise. While the Yanks won’t necessarily make a big move before the deadline, they’re certainly exploring what’s out there.

That the Yankees sent two scouts solely to see Burnett doesn’t mean that they’ll land him. As we’ve discussed before, it’s not likely that J.P. Ricciardi would dish him within the AL East. However, this is a unique case. Burnett can opt out of his five-year, $55 million contract after this season. So Ricciardi, knowing he could lose Burnett at the end of the season anyway, might be willing to send him to whomever bids the highest.

This brings to the forefront a number of problems. If the Yanks trade for Burnett and he smokes the competition in the second half, he’ll opt out and the Yanks will have wound up with a two-month rental. If he sucks it up, not only will the Yanks have paid for a lemon, they’ll be stuck with him for another two years, owing him $24 million. The only way this really works out is if he pitches well and agrees to stay with the team.

Then again, given his injury history, maybe the Yanks would be best served to have him as a two-month rental. We know he has the stuff to succeed. It’s a matter of his ability to stay healthy. And yeah, he’s pitched poorly this year, though he’s done well against the Yanks and the Rays in his past two starts.

Which brings me to another point: Burnett is a Yankee killer. In 53.2 innings career against the Bombers, Burnett has struck out 46 to 19 walks, and has allowed just 17 runs. Since the beginning of the 2006 season, Burnett’s first with the Jays, only Roy Halladay and Scott Kazmir have better numbers against the Bombers (minimum 45 IP). Make the minimum IP 35, and Burnett slides one slot back, to Jarrod Washburn, another guy the Yankees could conceivably target.

No, I don’t think they’ll land Burnett. No, I don’t think it’s worth adding Washburn and his $9 million salary for 2009. But Brian Cashman is certainly peeking into the window. If there’s a deal to be had, it seems the Yanks will be prepared to take it. But I wouldn’t go betting on an acquisition before July 31.