Mark Feinsand tweets that Dr. James Andrews gave Damaso Marte’s left shoulder two thumbs up, and the pitcher will return to Tampa. He’ll continue his rehab there, but there’s still no timetable for his return. As poorly as he pitched earlier this year, a healthy and effective Marte would go a long way to improving any bullpen, not just the one in the Bronx.

Marc Carig has updates on some injured Yanks: Brian Bruney threw 20 pitches yesterday and felt no pain in his elbow (so he says). He thinks he’s a week and a half, or possible less away. Damaso Marte threw 25 pitches from a mound in Tampa and has started to throw some breaking balls, but there is no timetable for his return. Xavier Nady played catch at 75 feet and played in another Extended Spring Training game, but like Marte there is no timetable for his return. Mo knows the Yanks could use all three now.

Well that explains it. The Yanks have placed lefty reliever Damaso Marte on the DL with a bum shoulder, according to PeteAbe’s 10:23 & 10:59am updates. Marte came back from the WBC with a sore shoulder, but he says this latest ailment occurred when the team was in Boston. No word yet on how long he’ll be out; Anthony Claggett has been called up to take his spot on the roster. 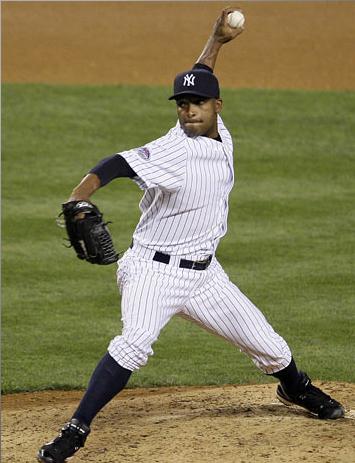 Amazingly, we’ve seen Joe Girardi manage his bullpen eerily similar to his predecessor Joe Torre: using the same two or three relievers day after day while the rest of the bullpen corps rot. The team is currently carrying eight relievers. Eight. Yet it seems like we’re always having Jose Veras (awful) or Jon Albaladejo (he’s had his moments) shoved down our throats.

Come on Girardi, you’re better than this.

Just a couple bits of actual Yanks news for the early afternoon:

After coming back from the WBC with what appeared to be minor injuries, Robbie Cano and Damaso Marte will get MRI’s tomorrow after being checked out by team doctors. Cano’s injury is being described as right shoulder tendonitis, while Marte is dealing with left shoulder inflamation. Cano pinch hit in today’s game game against the Astros and played catch after the game, so hopefully that’s a sign that it’s not too serious. Marte hasn’t tested the shoulder as far as we know, and says he hurt himself working with 25 pound weights.

Fresh off a dramatic and historic loss to the Netherlands in the WBC, Robbie Cano and Damaso Marte returned to the Yanks today nursing some minor injuries, says Pete Caldera. Marte has pain in his left pectoral, believed to be the result of weighlifting, while Cano’s right shoulder is barking. It’s possible Cano’s injury is a result of the workload and intensity of the WBC games. Both players are going to get checked out by the Yanks’ medical staff today, and won’t see action this weekend as previously thought. The injuries sound minor, so hopefully they won’t be out very long.