Are they or aren’t they? That seems to be the question surrounding the Jake Peavy trade talks. While yesterday, Peter Gammons claimed that the Yankees were not in the running for Peavy, today, Ken Rosenthal has a conflicting report.

The Yankees’ farm system is strong enough to match up with the Padres if the teams revive their discussions on right-hander Jake Peavy. The Padres, according to one major-league source, told the Yankees that a deal would be possible even if the Yankees declined to offer right-hander Phil Hughes.

The Padres scouted Hughes in a recent Arizona Fall League game, but the Yankees have zero intention of trading him.

There is, of course, one problem. Joel Sherman, the man behind yesterday’s five-year/$80-million A.J. Burnett offer that was shot down before the day was out (Oops. That was George King. The Post writers are all the same to me.), claims that Jake Peavy will not pitch for the Yankees. (If you insist on a link, tough. You know where to find Sherman, and you all should know our position on linking to The Post.)

Now over the last few weeks, we’ve heard a lot of back and forth on Peavy. Some claim he’ll pitch in New York; others say he won’t leave the NL or at least Southern California. Who knows? Certainly not Ken Rosenthal’s or Joel Sherman’s sources with any degree of certainty. If the unnamed folks knew, we wouldn’t be engaged in some investigation into Jake Peavy’s true motives.

What does seem clear, however, is that the Padres are viewing this trade more and more in terms of a salary dump. If the Padres are willing to put it out there that this deal can be consummated without Phil Hughes, they’re signaling that they need to dump Peavy’s contract while losing some negotiating leverage.

In the end, I doubt that this trade will get done or ever come close to completion, but it does provide us an interesting exercise in interpreting unsourced rumors and varying positions. In other words, don’t read too much into anything that isn’t a done deal.

Just to rib the people involved in the Jake Peavy discussion, here’s something you can keep in mind when spelling his last name.

This is a Peavey:

This is a Peavy: 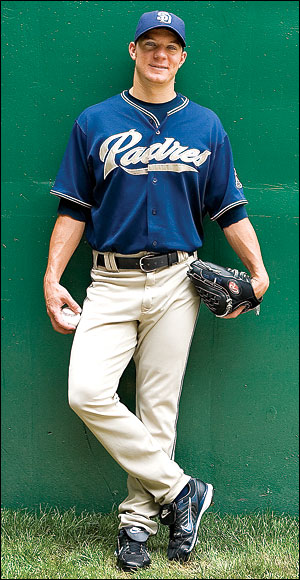 The back-and-forth on Jake Peavy and the Yanks continued today with Buster Olney’s offering up his take on the rumors that just won’t die. According to Olney’s latest blog post on ESPN.com (Insider-only), the Padres and the Yanks probably won’t be consummating a deal anytime soon.

he past conversations between the Padres and the Yankees about Jake Peavy never developed into anything that close to being serious, sources say, and it’s highly unlikely the Padres and Yankees will ever get serious about a Peavy deal.

The Yankees are focused almost entirely on adding pitching through free agency, because they won’t have to part with their prospects in a deal. CC Sabathia, Derek Lowe and A.J. Burnett are the Yankees’ targets, and not Peavy.

So, in practice, two things would have to happen before Peavy-to-the-Yankees became serious:

1. A whole bunch of other pursuits would have to end badly.

2. The price on Peavy would have to come down.

I know a lot of Yankee fans would like to see Peavy in pinstripes; I know others who think trading for him would be a bad move. I’d much prefer Peavy over Lowe or Burnett at the right price. I think he represents a better long-term investment and will be a better pitcher over the duration of their respective contracts.

That said, I can understand why the Yanks don’t want to give up the farm for Peavy. I can understand why they’d rather go after the free agents. But if the Yanks sign CC, and the price on Peavy drops, it would be hard to say no to that deal. It might not be accurate for us to seriously evaluate this potential acquisition right now, but things have a funny way of changing in the Hot Stove League.

According to Ken Rosenthal, the Yanks and Padres held “numerous discussions” about Jake Peavy during the GM meetings. Supposedly, the Braves and Cubs, Peavy’s top two destinations, are out of the running, and this trade may come down to the Yanks and Angels. I don’t think I’m going out on a limb when I say that whichever of these two teams doesn’t land CC Sabathia will push hard for Peavy.

Padres GM Kevin Towers doesn’t believe he can work out a deal between his team and the Cubs or Braves for Jake Peavy. So the Yankees and Angels may be next in line. Meanwhile, David Pinto believes the Yanks could land Peavy for Kei Igawa, Ian Kennedy and an outfielder. If that outfielder isn’t Austin Jackson, I don’t think that package would net them Peavy unless the Padres really wanted out of that contract. Either way, I’d rather just give up money to land CC Sabathia than prospects and spare parts for Peavy.

The New York writers have kept themselves busy over this past week, running the floor to bring us rumor after rumor from the GM meetings. While we know that the bulk of these rumors mean little or nothing, we still like to toss them around and drop our two cents. Today, we get some peeps about the Yankees pitching targets, namely Jake Peavy and CC Sabathia.

We’ll start with Peavy. Mark Feinsand has a tidbit on the Padres righty:

The Yankees could put together a package built around Phil Hughes and Austin Jackson, according to a source, although they would likely have to include two or three more players, one of which could be Ian Kennedy. The Padres, according to the source, have no interest in Robinson Cano.

As always, beware the anonymous source. Yes, the Yankees could do that, but there’s only a small chance they will. It would mean talks have been exhausted with all NL teams, and even then the Yankees would likely have to add dollars and/or years to Peavy’s contract. He’s not going to waive his no trade clause for nothing, as he’s made clear through his agent Barry Axelrod.

The tireless Ken Davidoff says this won’t happen. Then again, he also said that the chances of Moose coming back is one percent, so we should get a chance soon to gauge his predictive accuracy. He also puts the kibosh on the Matsui to Seattle rumor, which sounded pretty frivolous from the outset. Now, if he could only kill those Lowe rumors.

Not everything is sunshiny for the Yanks, though. Davidoff brings up a scenario under which the Angels could snatch up CC Sabathia, even if the Yankees are the high bidders. It would start with the Angels letting Mark Teixeira walk. While that’s not a highly likely scenario, word is from Terry Reagins’s lips that the team won’t wait around forever awaiting his decision.

So how could the Angels then get CC without being the high bidder? If they top the $137.5 million, six-year contract signed by Johan Santana last winter, Sabathia could be content. We’ve talked about the pressure from the union to take top dollar, but the pressure might not be as intense if CC raises the bar for pitcher salaries. The union might raise a stink if CC wants to take a six year, $120 million offer from the Angels when a six year, $140 million deal is on the table from the Yankees. But if the Yankees are offering $150 million and the Angels are offering $140, he might take the slightly lower, yet still record-breaking, salary to play on the West Coast.

All of this is to say that we have no freaking clue how this off-season is going to pan out. Plenty of people say they are “convinced” CC will be a Yank. Others (::cough:: Mike Pop) think Burnett in pinstripes is inevitable. However, there is no sure thing during the Hot Stove.

Johan Santana dominated the baseball off-season last year. For much of November, December and January, the news began and ended with Santana rumors and shenanigans. This year, while the free agent class is strong, Jake Peavy seems to be the name making the trade rumor rounds.

As everyone knows, we at RAB were stridently opposed to the Santana deal. While we’ll never know for sure, the Yanks seemed to be offering up at least Ian Kennedy and Phil Hughes along with some combination of outfield talent in exchange for just one year of Santana and the ability to sign him to a very long-term deal. Considering the money, pre-existing contract and outlay of talent, the Santana deal didn’t make sense to us then, and we have no regrets.

But I personally can’t say the same for Jake Peavy. The Padres are currently shopping the 27-year-old right hander. Peavy is set to make a good chunk of change, and San Diego would prefer to have the payroll flexibility as they attempt to rebuild after a disastrous season. Peavy also has a no-trade clause which complicates the matter.

Prior to this week, reports indicated that Peavy wanted to stay in the NL, and Atlanta had emerged as a clear destination. This week, however, rumors emerged that indicated a willingness on Peavy’s part to come to New York. The Padres are looking to off-load a contract; they want Major League or Major League-ready talent in return; and as everyone knows, it pays to keep the Yanks involved.

The gut reaction of many Yankee watchers is to lump this deal in with the Santana talks. If the Yanks wouldn’t trade for a proven AL lefty, why would they trade for Peavy? In reality, it’s not comparable.

It all boils down to the contract. Peavy is owed a little over $60 million over the next four seasons (with a $22 million option for 2013). For a pitcher just entering his pitching prime, that’s a relative steal. Unlike with Santana, a team acquiring Peavy wouldn’t be paying for just one year; they’d be trading away for four or five years of a pitcher.

Now, could Peavy succeed in the AL? That’s the question a lot of Yankee fans have asked. After all, not only has Peavy been a lifelong NL pitcher, but he’s thrived in the vast reaches of Petco Park. All we can do is look at some numbers. Since Petco opened in 2004, Peavy has pitched quite well there. In 541.2 innings, he has a 2.66 ERA. He has allowed 149 walks, racked up 600 K’s and has surrendered 37 long balls or one every 14.2 innings.

His numbers on the road, however, are rather encouraging. In that same time frame, Peavy has 427 road innings to the tune of a 3.31 ETA. He has allowed 47 home runs, has walked 143 and has struck out 410. Those are some pretty good peripherals. Furthermore, we have some limited numbers against the AL. In his career against American League teams, Peavy has thrown 120.1 innings with the following line: 3.29 ERA, 13 HR, 33 BB, 113 K. All of these numbers suggest the ability to get hitters out in any league.

Basically, this all boils down to the players involved in any potential trade. The contract isn’t an obstacle; Peavy’s stuff and his past success lend credence to the belief that he could pitch at a high level in the AL. I’m not opposed to seeing Ian Kennedy go in a potential deal; I’d be less thrilled to see Phil Hughes go; and I wouldn’t include both of them — or Robinson Cano by himself — in one trade. But if the right offer comes along and Peavy passes his physical, I’d welcome the righty to New York.