We are just two weeks away from Spring Training and things are pretty quiet. All the big free agents (but not The Big Piece!) are off the market and most teams are merely filling out their benches, bullpens or simply taking flyers on intriguing talents. The Yankees haven’t made a significant move since they signed Aroldis Chapman a month and a half ago, and it is easy to wonder whether they’re going to make any more before camp starts.

One place where the Yankees have room for improvement is middle relief. Beyond Chapman and Dellin Betances, they have Adam Warren and Tyler Clippard and then an army of unproven young pitchers. Veteran relievers looking to catch on somewhere are in abundance right now. Let’s take a look at Luke Hochevar, who once won the clinching game of a World Series but is coming off a significant injury.

There’s a reason the Kansas City Royals didn’t pick up Luke Hochevar’s option this winter despite another strong season for the 33-year-old righty. That reason is a significant surgery, his second in four years. He had surgery in August to fix thoracic outlet syndrome, which involves the compression of nerves near the neck and upper chest/shoulder. Pitchers from Matt Harvey to Tyson Ross to former Yankee Phil Hughes have dealt with TOS in the last year while it essentially ended the career of Cardinals’ ace Chris Carpenter. However, Royals reliever Chris Young overcame the surgery for an effective second act to his career.

The surgery involves the removal of a rib near the shoulder (here’s more from the Cleveland Clinic if you’re interested). The recovery time takes about six months, so Hochevar is on track to be ready for Spring Training, provided that someone has actually signed him.

Unfortunately for Hochevar, this isn’t his only major surgery in recent years. He lost his entire 2014 season and part of 2015 to Tommy John surgery, four years after he had suffered a partial tear of the UCL ligament but rehabbed it to return. His performance post-TJ surgery was well below his breakout 2013 numbers and are cause for concern. A pitcher two surgeries removed from his best season is no doubt a risk and that likely plays a large role in why he’s on the market right now.

Hochevar the reliever has been an effective part of a competitive Royals team in the last few seasons. The former No. 1 overall pick made his debut in 2007 against, who else, the Yankees and was a struggling starter with ERAs well above 4.50 from 2008 to 2012.

When Hochevar was a starter, he had 5-6 pitches, but he cut his repertoire down to just three primary pitches as a reliever, eliminating an ineffective slider and changeup. He now relies on two fastballs (a four-seamer and a cutter) while using a curveball with knuckle curve grip. His fastball velocity jumped from 92.6 mph to 95.5 when he converted to relief pitching, but it is down to 94.4 post-TJ surgery.

Originally a seldom-used pitch, his cutter is now thrown over 40 percent of the time (46.8 last year). The cutter sits in the high 80s and is his go-to pitch because inducing a lot of swings and misses for a cutter. His four-seam fastball wasn’t as effective in 2016 after it used to be his most-used pitch before his Tommy John surgery. The curveball, which he throws with a knuckle curve grip, sits between 75-80 and can get swings and misses. Here are the whiffs per swing for each of his pitches in the last two years, via Brooks Baseball. 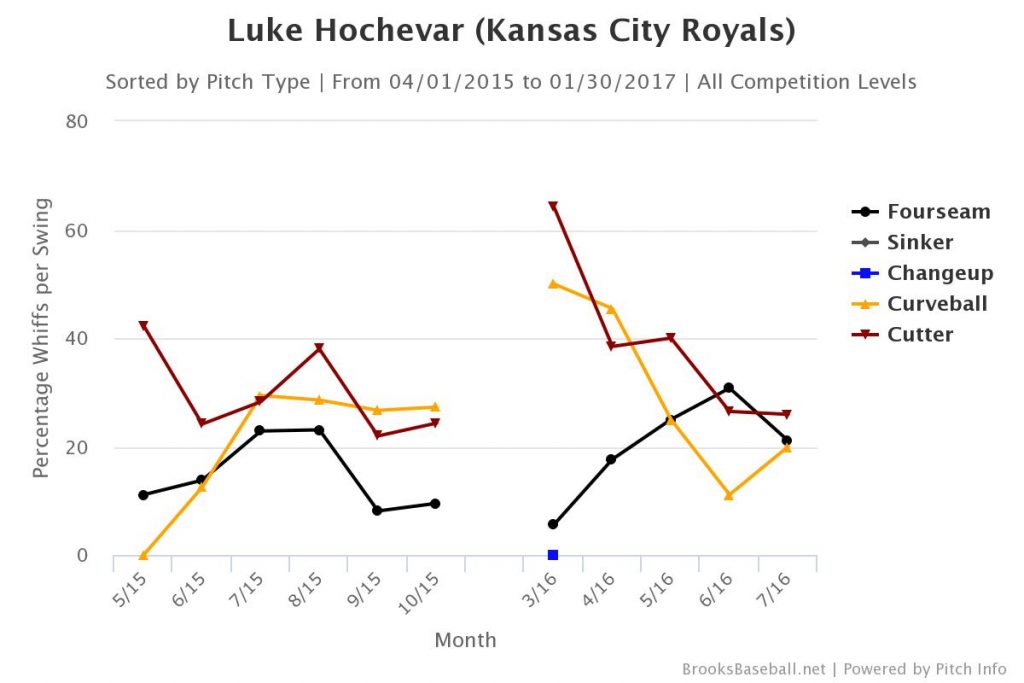 If you want to see what his stuff looks like, check out the video below. He gets two strikeouts on his curveball and one on a cutter. He really has a lot of bite on the cutter.

As mentioned above, the Royals declined their option on Hochevar this offseason. It was worth $7 million and they chose instead to buy him out for $500,000. Assuming Hochevar is, in fact, healthy and ready to go for the spring, he would likely get a one-year, incentive-laden deal. Almost definitely less than that $7 million option, but maybe something around $3-4 million?

If Hochevar wants to bet on himself a bit more, there could also be a team option for the 2018 season. It’s also not hard to see the reliever market bottoming out and relievers like Hochevar having to settle for one-year deals or even MiLB deals.

Does He Fit The Yankees

Hochevar was weirdly connected to the Yankees before the trade deadline this year in conjunction with Carlos Beltran rumors. It didn’t make too much sense for Hochevar, who at the time just had an option for 2017, to be the headline of a return for Beltran, but the rumors may signify some interest from the Yankees’ front office.

Beyond their top four, the Yankees don’t have anything too reliable in their bullpen, not that Hochevar can necessarily be relied upon next year. He would represent a possible upgrade in the middle innings over rookies and other younger 40-man options like Ben Heller and Jonathan Holder. Hochevar can throw multiple innings — he did it only 13 times over the last two years, plus three more times in the 2015 playoffs — but he has thrown fewer and fewer innings each of his last three seasons.

If the Yankees truly see themselves as contenders, a move for a veteran reliever makes a lot of sense with the lack of depth in the rotation and the team’s desire for a dominant bullpen in past years. He has 10 2/3 innings of shutout playoff experience from 2015, whatever that’s worth, and likely doesn’t require a major cash outlay that would affect the team’s desire to get under the luxury tax in the next couple years.

Thanks to last night’s win over the BoSox, the Yankees improved their postseason odds to … 5.2%. That’s not so good. Ownership still has not whether to buy or sell at the trade deadline according to Buster Olney, which is no surprise. I’m guessing they won’t make that decision until the very last moment. I just hope none of their top trade chips get hurt between now and then. Anyway, here are some miscellaneous trade notes.

According to George King, the Yankees and Royals discussed a trade involving Carlos Beltran earlier this season. Apparently reliever Luke Hochevar’s name came up. The Royals are short on offense at the moment and they have a huge hole in right field, so while Beltran doesn’t fit their mold as a premium defender, he’d sure as heck improve their lineup. Remember, Kansas City tried to sign Beltran as a free agent two offseason ago.

Hochevar being part of trade talks is interesting if not a little weird. He’s a solid middle reliever (3.86 ERA and 3.83 FIP) and an impending free agent, but trading rental Beltran for a rental reliever makes no sense for the Yankees. I think Hochevar would have been part of the deal as a way to offset money on Kansas City’s end. (He’s making $6M total this year.) Beltran for Hochevar and a prospect or two seems like the final outcome there. There’s no word on whether talks were serious or are ongoing.

The Yankees spent the weekend scouting the Nationals’ Triple-A affiliate and will cover the big league team this week, reports Barry Svrluga. It’s hard not notice Washington will be calling up pitching prospect Reynaldo Lopez from Triple-A to make his MLB debut tomorrow night. Pitching prospects Austin Voth and A.J. Cole are currently with Triple-A Syracuse as well.

Lopez, who Baseball America ranked as the 48th best prospect in baseball in their midseason top 100, has long been speculated as a possible trade target for New York. That said, he didn’t pitch in Triple-A this weekend, so Yankees’ scouts in Syracuse didn’t see him. He threw an inning in the Futures Game in San Diego on Sunday. Voth and Cole pitched Friday and Saturday in Triple-A, respectively, for what’s it worth. The Nationals have interest in Andrew Miller and Aroldis Chapman, so it’s no surprise the Yankees are scouting their system. They’re scouting everyone’s system.

According to Jeff Wilson, the Rangers would like the Yankees to eat some money in a potential Miller trade. Miller is owed whatever is left of his $9M salary this season plus another $9M in both 2017 and 2018. That’s certainly very reasonable given his on-field production, but who knows what Texas’ financials look like. A $9M a year reliever may not be feasible to them.

Of course, given their financial might, the Yankees should be willing to eat money to facilitate any trade as long as it means a greater package of players coming back. It seems silly to pay someone as good as Miller to play elsewhere, but you know what? If it’s the difference between getting a very good prospect and an elite prospect, why not? The Yankees have the money. That’s a good way to leverage their financial firepower.

Cubs, others continue to scout Yankees

Yet another high-ranking Cubs official was at Yankee Stadium this weekend, presumably to scout their bullpen pieces, reports George King. They’ve now had three different scouts and pro scouting director Jared Porter watch New York’s end-game relievers in recent weeks. That ain’t routine coverage. The Cubs are getting multiple eyes on these guys because they want as much information as possible before getting serious about a trade.

King says the Braves, Rangers, Marlins, Cardinals, Nationals, Royals, and Giants have also been scouting the Yankees recently. I’m not quite sure what the Braves were doing there. Maybe they were checking guys out in the case the Yankees decide to buy or something? The other five clubs all make sense though. They’re all contending and they all have some kind of clear need New York may be able to address via trade. The deadline is exactly two weeks away.