It seems that the Red Sox and Mark Teixeira have a decade-long history that goes back to the 1998 draft. According to Justin Sablich, Boston tried to draft and sign Teixeira in the first round, and when the then-18-year-old expressed his desire to go to college, the Red Sox made sure Teixeira wasn’t drafted by anyone else. A jilted lover — or, in this case, a first baseman — never forgets.

The Times’ Ben Shipgel profiles Mark Teixeira today, and he paints a picture of a consummate professional baseball player who, like many of us, grew up idolizing Don Mattingly. Long gone, it seems, are the days when the Yanks’ first baseman wintered in Las Vegas and spent his spare time signing body parts.

As much as it pains me to admit it, Curt Schilling has the most level-headed assessment of the Yanks’ Mark Teixeira signing. While his loyalty to his friends — most notably, Mike Lowell — may lead Curt to overvalue what Lowell would bring and undervalue Teixeira’s potential contribution, he chides Boston sports fans for their reaction to the signing.

Please stop with the greedy bum statements too, all of you screaming that would be saying nothing if the Sox had ante’d up. I’m surprised but I don’t think nearly as much as most others. Why? Because not once, never, did you hear ANYTHING from Mark in this entire charade. This is how Scott Boras works, and his clients love him for it. Mark never said he wanted Boston, sources ‘close to negotiations’ did. That and a handful of nickels will get you a quarter.

Stop being surprised in these deals when you hear comments from EVERYONE but the players. Until the player speaks I am comfortable telling you more than 90 percent of what you hear is what teams WANT you to hear through their media ’sources’. Half of these folks get told things from teams because teams
WANT that message in particular, out there…

I think the Steinbrenners, coming off a miserable last season in Yankee Stadium, are dead set on opening the new stadium with a World Series and they don’t care how much it costs. Good for them. You can bitch all you want about the Yankees and greed but they spend money in a sincere effort to win it all, every year. What fan wouldn’t want their teams to do that.

We might not like Curt around here. He’s often outspoken and obnoxious, and he certainly knows how to goad Yankee fans. But he’s hit the nail on the head with this one. The Yankees did what they should do with money lying around, and Boston’s fans should realize that had the Red Sox signed Teixeira, they’d be dancing in the streets around Copley Square today. 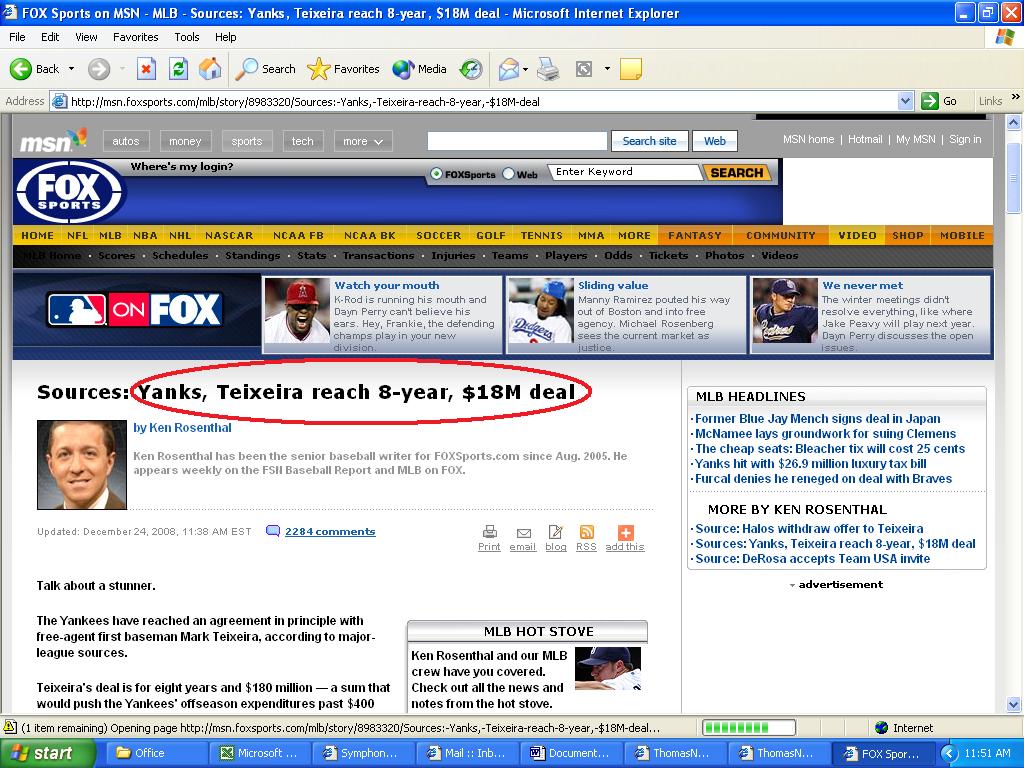 Right now, the Red Sox and, to a lesser extent, the Angels must be reeling. The Yankees just swooped in and captured the big offensive prize of 2008 a few weeks after signing two of the top pitchers out there as well.

But while baseball fans from across the country line up to boo the extravagant Yankees, the real loser in the Mark Teixeira hunt isn’t one of the Yanks’ fellow competitors. It is none other than Manuel Aristides Ramirez, a player just a few days ago who was rumored to be heading to the Yanks as early as today.

Over the weekend, it seemed as though the Red Sox would emerge with Mark Teixeira. They needed a bat to replace Manny and to back up David Ortiz in their lineup. While they have Kevin Youkilis and Mike Lowell, they were about to go all in to land Teixeira. Had the Red Sox landed Teixeira, the Yanks probably would have turned their attention to Manny as a response, and Manny and Scott Boras knew that.

In fact, according Dan Graziano, the Yankees were more than prepared to make Manny an offer. Had Teixeira left for the Red Sox, Manny would have quickly become a Yankee, according to Graziano’s sources, and those sources were probably feeding Impacto Deportivo too when it seemed as though Teixeira was about to sign with the Red Sox.

Then, the unthinkable happened. The Red Sox got cold feet over a long-term, high-dollar deal, and the Yanks, long rumored to be on the periphery of the Teixeira negotiations, swooped in and landed themselves a $180-million Christmas present, Manny be damned. As they had hoped all along, Boras came calling at the last hour, and the Yankees blocked their rivals from landing a big bat and a Gold Glove first baseman, but they’ve also halted the Manny market.

Right now, things are at an impasse for Ramirez. The outfielder claims to be searching for a four- or three-year deal, but none have materialized in weeks. The Dodgers have withdrawn their two-year offer, and the Angels say they are unequivocally not interested. Even the Mets, in need of some help, say they aren’t interested either. The only other team that makes sense — the Red Sox — separated less than amicably from Manny just five months ago. As hard as it is to believe, with the Yankees out of the picture, no team is currently bidding for the services of Manny Ramirez, a future Hall of Famer.

Of course, over the next few weeks, that will probably change. As evidenced by their $170-million Teixeira play, the Nationals clearly have money to spend, and Manny might help fill seats in D.C. The Dodgers say they’re still interested and now have little competition. Manny will get some of his millions, but he won’t get what he could have gotten from the Yankees. This time, only one of Scott Boras’ clients will win.

Still, despite Tuesday’s turn of events, the Manny-to-the-Yankees crowd just won’t stop. In a piece published mere minutes before the Teixeira signing and hastily edited a few minutes later, Stephen A. Smith claimed that the Yankees need Manny. He stands by that stance. Meanwhile, Jesse Spector of The Daily News thinks the Yanks can add Manny and still cut payroll. But I’d say it’s all over for Manny and the Yanks.

Brian Cashman and Hal Steinbrenner probably aren’t completely through with their winter spending yet. Andy Pettitte is still out there, and the Yanks could choose to revisit the Mike Cameron talks next month. Manny, however, isn’t in the cards, and while Ramirez once thought the road to the bank went through the Bronx, he emerged from Tuesday as the biggest loser so far.

So I spend my day having lunch with my parents, and I come home to this news. It’s fairly shocking, but as my dad said, “I expected that.” Mark Teixeira and the New York Yankees just made too much sense. He fills an obvious need right away, and even if the deal includes the ever-popular opt-out, the Yanks will get a few years of Teixeira’s peak.

As details about the signing emerge, Dan Granziano runs them down. The deal — eight years and $180 million — will contain a no-trade clause, and we’ve just learned via Danny Knobler that it will not contain an opt-out clause.

What this Teixeira signing indicates though is that a new generation of Steinbrenners is willing to spend what it takes to win just like George. They’ve also managed to do so without trading any of their prized young arms. Here’s what they have, as per Graziano:

Those are also four of the five largest contracts in baseball history — the fifth being the 10-year, $252 million deal Rodriguez signed with the Rangers prior to 2001. Rodriguez was traded to the Yankees after the 2003 season and opted out of that deal to sign a larger one after the 2007 season.

Also, assuming the deal goes through, the Yankees will have signed six major free agents since the end of the 2007 season (when George Steinbrenner’s sons took control of the team) for a total of just under $800 million:

The Yankees are playing with house money. They’ve bought the pieces they need to supplement the prospects they’re developing. We’ll find out starting in April how it all works. Right now, the Yanks are rich, and they’re not afraid to spend, spend, spend.

As first reported by Jon Heyman and confirmed by Buster Olney, the Yankees are finalizing a deal with first baseman Mark Teixeira on an eight year deal worth $180 million. The deal reportedly includes a full no-trade clause. There is no word on a possible opt-out.

This comes in on the heels of a confusing morning in which many sources thought Teixeira would sign with Boston today. Some questionable sources even said that the two parties had an agreement in principle. That doesn’t appear to have been true, though.