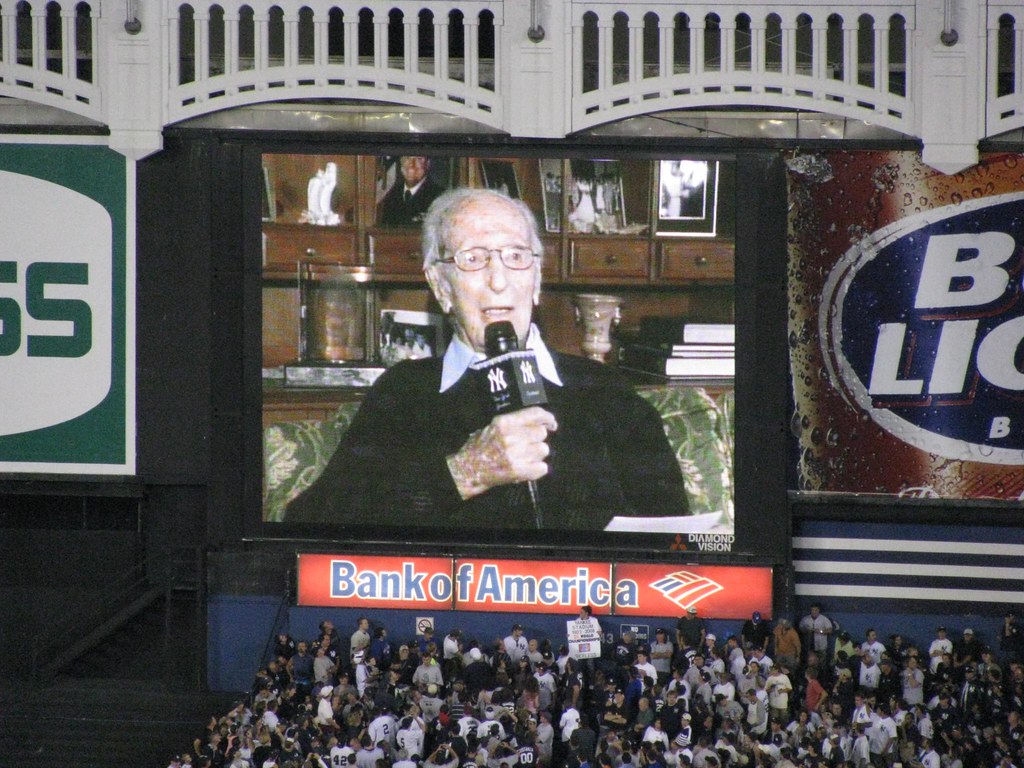 Although Bob Sheppard didn’t use the word “retired” when he spoke about his career earlier this week. the announcement on Thanksgiving that he is won’t be coming back the PA booth at Yankee Stadium put a quiet cap on an excellent career. The Yanks had already toasted Bob Sheppard; they held a Bob Sheppard Day in May of 2000 and gave him a plaque in Monument Park then. But now an era of baseball is officially over.

Through thick and thin, Sheppard was the Yanks’ PA man. He saw Mickey Mantle’s rise and fall, Reggie Jackson and Billy Martin, the death of Thurmon Munson, some memorably bad Yankee teams in the late 1980s and early 1990s, and the arrival of Derek Jeter and a second golden age. He’s seen more players pass through the stadium that just about anyone else and has pronounced, in that Voice of God, more baseball players than I could ever remember.

He certainly had his way with names too. Shigetoshi Haegawa never sounded better than when Bob would intone it at the Stadium, and we know Derek Jeter loved hearing the man’s voice. Sheppard lives on in a recording announcing the Yanks’ short stop every game.

But beyond his voice, Sheppard lived a life in baseball. By the end, he had announced around 4500 games and over 100 playoff games. He had, quite literally, seen it all, and in an amusing piece by Buster Olney about Bob’s eagerness to leave at the end of the game, you get the sense that perhaps he had sometimes seen enough:

On most game days in the four years I covered the Yankees, from 1998 to 2001, I would wind up at the back of the press box with Bob and Eddie Layton, the team’s former organist, whenever a game was one out from its end. I usually filed the first draft of a game story with the editors at The New York Times by the top of the ninth inning, and because I wanted to make sure I was on the first elevator down to the basement level, I’d move from the front row of the press box to the back, closer to the door. Bob and Eddie always wanted to be on that elevator, too, because they wanted to beat the crowd out of Yankee Stadium.

So we would wait for the final pitch. If somebody reached base with two outs in the ninth, Bob took the 10 steps or so back to his P.A. booth to announce the next hitter and then rejoined us at the back of the press box.

When the final out was actually registered, it was as though a starting gun went off for the three of us: We would race toward the elevator, at varying speeds. But Bob was more efficient than Eddie and I, actually. He would make his move at the crack of the bat that lifted a fly to the outfield, for example, and would assume that somebody would catch the ball. If the ball fell, I guess he figured the crowd’s reaction would tell him so, and he would just backtrack.

Anyway, time after time, Bob would be eight or 10 steps ahead of me as we took off for the elevator, moving with (and I’m absolutely not exaggerating here) remarkable speed for someone who was about 90 years old at the time. He would hold a book in the crook of his arm, like a football. The elevator operater waited for him, closing the doors as soon as he and Eddie (and, as it turned out, a dopey sports writer) stepped on.

I remember how Bob’s PA duties would sometimes taper off by the end of the game. He would only announce last names or sometimes simply not announce a player at all. I always just assumed he was sitting there engrossed in a book and ignoring the game. Olney’s tale drives home that point.

We’ll miss Bob at Yankee Stadium. In fact, we have for the last two years. It just doesn’t sound the same without him. I wonder though if Mr. Sheppard will miss the Stadium and the game experience. After all, it became a job just as we all have jobs, and who really looks forward to doing a repetitive job after the 4500th time anyway?