Friday night the Yankees had a win ripped away when Aroldis Chapman failed to retire even one of the five batters he faced, and blew his third save in 12 opportunities. A few of the nine saves he did nail down were a bit dicey as well. Chapman rebounded with scoreless innings Saturday and Sunday, though so far this season, he has not been the overwhelming force the Yankees thought they signed.

The single biggest difference between Chapman this year and the Chapman of the past has been a decline in swings and misses. Chapman threw 56 total pitches in his three appearances in Boston and generated one (1) swing and miss. He’s gotten eleven swings and misses in his last eight appearances and 148 pitches, or 7.4%. His career swing and miss rate is 17.3%. This year it’s 12.5%. The MLB average is 10.4%. Something has gone awry here.

The first thing we all thing about with Chapman is fastball velocity, and so far this year his velocity has been fine. His fastball is averaging 100.0 mph on the nose and he’s topped out at 103.3 mph. Last year he averaged 101.1 mph and the year before it was 100.4 mph. And yet, look at the rate of misses he’s generating per swing with his fastball. This is whiffs-per-swing, not whiffs-per-total pitches:

That’s not great. The league average keeps creeping up each year while Chapman’s whiffs-per-swing rate with his fastball is dropping noticeably. He’s down nearly 40% from 2015. Chapman isn’t missing bats like he once did and he knows it. He doesn’t know why though. “Actually, that’s a good question. I’m going to go back and try to see footage and why because I honestly don’t know why,” he said to Brendan Kuty over the weekend when asked about the lack of whiffs.

Since Chapman’s swing and misses are down significantly, I figured it would be worthwhile to check out his fastball spin rate. For fastballs, a high spin rate correlates well to swing and misses and a low spin rate correlates well to ground balls. You don’t really want to be average. You want to be high or low. Here, with an assist from Baseball Savant, is Chapman’s fastball spin rate by month since Statcast became a thing back in 2015: 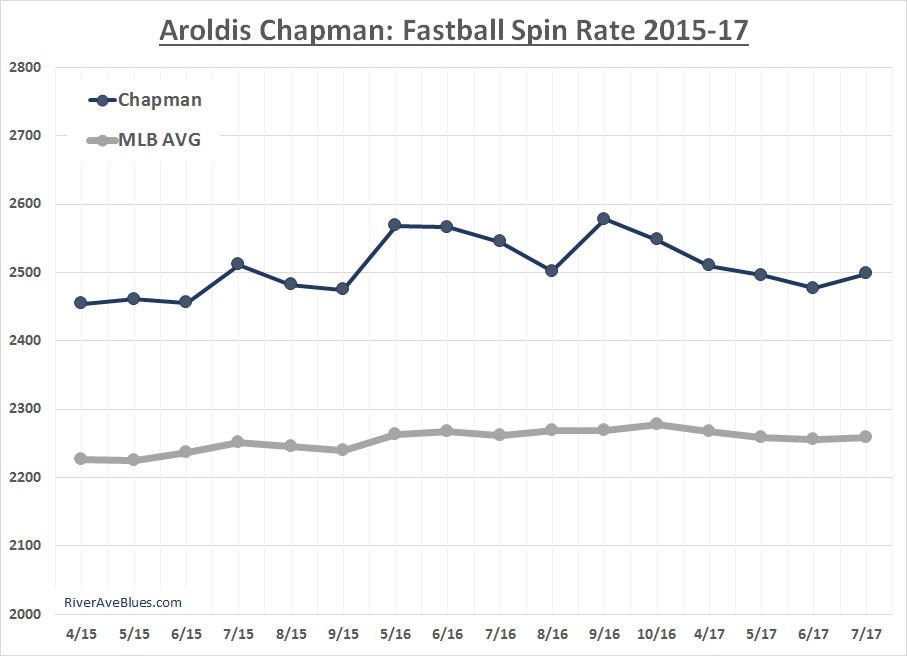 Let’s start with the obvious: Chapman’s spin far has been well-above-average since Opening Day 2015. His worst spin rate month, June 2015, was still nearly 10% better than the league average. Chapman has a very high fastball spin rate and he usually generates a ton of swings and misses. That’s not a coincidence.

Even with the gradual decline this year, I don’t see a big red flag with Chapman’s fastball spin rate. I’d be really worried if it dropped lower than it had been at any point the last two seasons and change. His fastball spin rate is down from last year and right in line with 2015, and Chapman was great in 2015. He’s within range here. That’s a good thing. You want Chapman to be Chapman, right? Right.

So, with his spin rate looking okay, we’re still left wondering why Chapman’s swing and misses are down this year. Joe Girardi chalked it up to everyone throwing hard now and hitters being more comfortable against big velocity, which I suppose could be true, but Luis Severino hasn’t had any trouble getting hitters to swing through his upper-90s heat. Dellin Betances is still getting a ton of whiffs with his fastball. That doesn’t really pass the sniff test.

The way I see it, there are four possible explanations for Chapman’s relative lack of swings and misses this year. One, he’s in permanent decline. That’s always possible. Humans aren’t meant to throw this hard for this long. Two, it’s just a slump. Sometimes ground ball pitchers can’t get ground balls and sometimes strikeout pitchers can’t get strikeouts. It happens. Three, Chapman is still not all the way back from his shoulder injury. It took Andrew Miller about a month to get back to normal following his forearm issue in 2015, remember.

And four, Chapman is dealing with a World Series hangover. He threw a lot of intense innings last postseason — 15.2 innings across 13 appearances, to be exact — and because the Cubs went to Game Seven of the World Series, Chapman had a shorter offseason recover. Game Seven was November 2nd and pitchers and catchers reported on February 14th. That’s not much of a break at all.

I think (hope) Chapman is going through a World Series hangover this year. He’s wouldn’t be the only one. Basically the entire Cubs rotation is dealing with it. If it is a World Series hangover, hopefully Chapman gets a second wind soon, or is 100% good to go next year at the latest. This is year one of a five-year contract, after all. Getting this version of Chapman in year one is kinda scary.

Chapman’s swings and misses are undeniably down this year, though his fastball spin rate is within its usual range, so that’s not a huge issue. Something is off though. I don’t know what. Maybe it’s a slump, maybe it’s a World Series hangover, or maybe he really is in permanent decline. Considering Chapman is only 29 and is super athletic and well built, as long as he’s healthy, I think he’ll be fine. Eventually. I don’t know when, exactly.