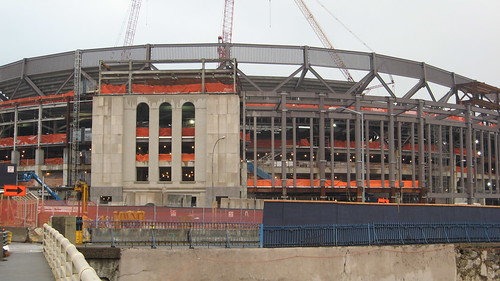 Even the steel girders will have corporate sponsors. (Photo by Ben K.)

According to a report in Sports Business Journal, the top sponsorship opportunities are going to come with a $20-million annual price tag. The opportunities, of course, are limitless.

Terry Lefton has the details:

CAA is selling the package and using it as a cornerstone for marketing efforts of its sports division. The package includes a variety of sign and marketing inventory in and around the Yankees new home, but does not include naming rights to Yankee Stadium. That means that the Yankees and CAA Sports are attempting to sell one of the biggest facility sponsorship packages ever without what’s usually considered the most valuable piece of sponsorship inventory. That’s exactly what makes it so intriguing to the rest of the sports industry.

“As the uber-brand for baseball, and sports generally, the Yankees are the only American franchise that could do this, with the possible exception of the [Dallas] Cowboys,” said Phoenix-based naming-rights consultant Rob Yowell, who’s had a hand in the deals that put Honda’s brand on the home of the Anaheim Ducks and Oracle’s name on the Golden State Warriors’ home arena. “But I would put any price tag, even the asking price, in quotes on this, because you are dealing with a proposition that truly has never been done before.”

…Among the biggest signage opportunities offered in the comprehensive financial services package are large signs on the highways around the stadium; prominent exposure on Gate 4, the stadium’s main entrance; several fixed signs on top of the stadium, affording an aerial view; a large sign atop the right-field scoreboard; even bigger signage on the back of the scoreboard, facing a new subway stop; signs on interior gates leading to the field; fixed and LED signs inside the stadium and the stadium bowl; permanent dugout branding; scoreboard vignettes; behind-the-plate signage and a logo on all Yankees tickets.

That is quite the impressive array of packages, and basically, advertisements will fill up just about every single available space you can imagine in the new stadium and then some. Tickets will carry branding; concessions will come with corporate sponsors. It will be an advertiser’s heaven.

Don’t get me wrong; I’m not complaining about this. In fact, more sponsorship opportunities leads to more dollars for the Yankees, and more dollars for the Yankees invariably means more of an in-field fiscal commitment to winning. Of course, some of this money will have to go toward those $500-million stadium construction cost overruns, but with advertising a-plenty, the team will hardly be hurting for dollars.

Now if only we at River Ave. Blues could brand something. Anyone got a few million dollars to spare?