A contextless table of Yankee ticket prices by year has elicited a small reaction from a few bloggers. WasWatching tossed up a brief post on the subject and iYankees noted the cost of going to the game.

The AP presented in the information in a way that suggests that Yankee ticket prices have, by and large, gone up for over forty consecutive seasons now. The tickets for field boxes were $3.50 in 1967 and now cost $250. Except for consecutive years in which the prices were held steady, then, the cost to attend games has been on the rise since the days of Lyndon Johnson, right?

Well, note quite. Take a look at this chart with a third column I added using inflation data. A graph put together by Tommy follows the table. 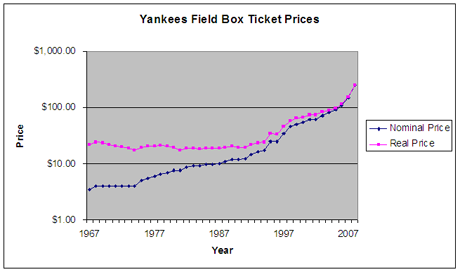 Meanwhile, some bloggers and fans always ask why, and for that, we turn to the market. The Yankees are selling tickets at a face value of $250 per, and they’re selling out the stadium. Tickets for premium games sell on StubHub for well over that value. The market, in other words, can afford it, and the Yankees are just trying to capture their revenues.

If you can sell out a stadium at $150 a ticket and at $250 a ticket, what owner wouldn’t charge the higher amount? The fans, of course, are the ones who lose out, and it times like these when we remember that baseball is a business. It’s all about the bottom line.