River Ave. Blues » 2009 Homerun Derby Thread
Our Universe is bigger than your Nation
GCL Yanks walk off with a win 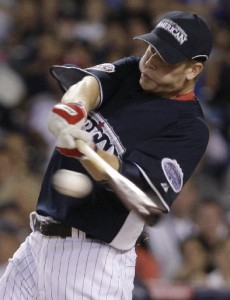 It’s hard to believe the 2009 Homerun Derby is already upon us, it seems like we’re just now coming down from the Josh Hamilton high of last year (no pun intended, I swears it). Ben and I were in the rightfield upper deck for that show, and it’s hard to imagine anyone one-upping that anytime soon. It would be cool if someone did though.

Here are the eight participants, listed alphabetically because I have no idea what order they’re going in.

Just so I can gloat later, my money’s on Pena. Enjoy the Derby.