River Ave. Blues » Inside the world of New Era caps
Ten games is just too many
Kennedy: 'It doesn’t feel like anything ever happened' 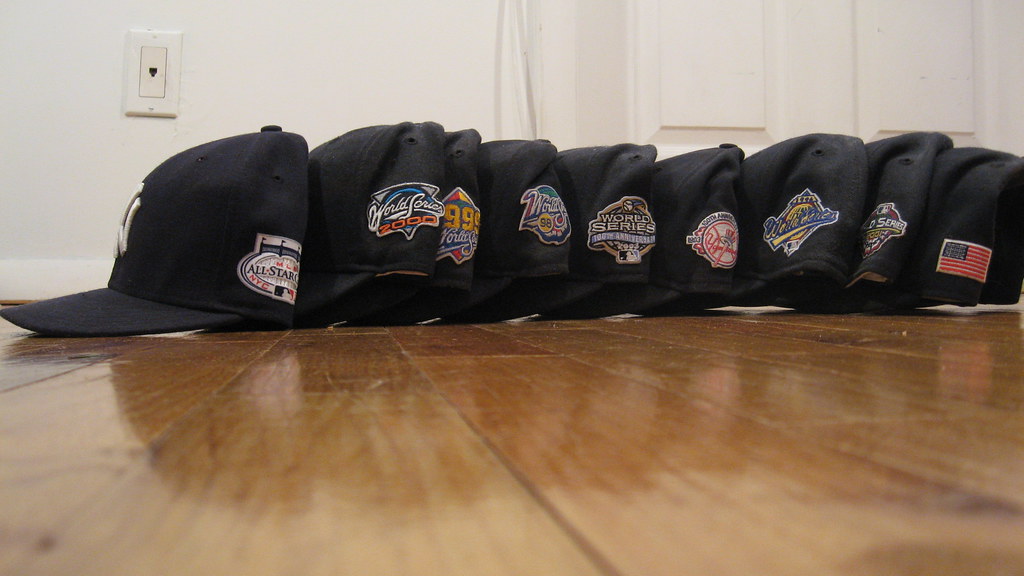 Around New York City — and the world, really — Yankee hats are forever popular. While I’m a big supporter for the on-field 59Fifty New Era cap in midnight blue with the white interlocking NY, some fans look for caps of every stripe and color. While we would rather forget it, Spike Lee originated the red Yankee cap made infamous by Fred Durst in the late 1990s, and that marketing stunt has led to atrocities such as this one.

Earlier this week, Ken Belson profiled New Era’s efforts at staying profitable in a bad economy. I found the article to be a fascinating glimpse inside one of baseball’s most ubiquitous and successful brands:

The hundreds of embroiderers and stitchers hunched over clattering sewing machines at the New Era Cap factory could be forgiven for thinking these are good times. After all, they churn out 72,000 baseball hats a week, about seven a minute. But modesty has been a byword this recession, and baseball caps are no exception. Consumers are opting for Corollas over Cadillacs, Formica kitchen counters over granite and, it turns out, hats with traditional designs over garish ones.

“We’re seeing a very jittery landscape,” said Peter Augustine, the president of New Era, which has its headquarters in Buffalo, 20 miles north of the factory here. “People are trying to stick to their most conservative plans. Even Yankee hats are down despite the year they are having.”

Sales have slipped 10 percent so far this year at New Era, a privately held company that is the country’s largest sports hat maker and the official provider of on-field caps to Major League Baseball. In the past week, the company has laid off 27 workers at its warehouse in Mobile, Ala., and 40 percent of its workers at its factories in the state because of low demand. Some of them could be rehired when production recovers.

Still, industry experts say that this is only a pause in the hat market, which has more than doubled in the past decade, when $35 fitted baseball caps became must-haves. Baseball caps remain the standard-bearer of the sports apparel market, and New Era, like its competitors, is trying to adapt to changing tastes and tightening strings.

The article goes on to detail New Era’s history in the game. The company first broke into the baseball world in 1934 when the Indians placed an order. The 59Fifties arrived in 1954, but it was not until 1993 that New Era became the exclusive provider of MLB caps. The piece gets into the ways in which various teams order hats and looks at how New Era can offer any color combination for hats.

Of note for Yankee fans though are the sales and stitch numbers. Yankee caps are the game’s top sellers. According to Belson, “Yankees caps..outsell all others by a 3-to-1 margin, not only because of the team’s success on the field but also because the logo has such broad appeal.” Meanwhile, the Yankees have a rather simple logo. According to New Era, one white interlocking NY features just 2,688 stitches, fourth least in baseball behind the Phillies, Pirates and Cubs. The Marlins’ crazy logo features a league-leading 10,966 stitches.

I’m a veteran hat collector. I haven’t missed a new Yankee patch hat since New Era introduced them in 1996. I’m eagerly awaiting the next addition to my collection, and I’m hoping it will be the 59Fifty that comes out with the 2009 World Series patch. I’ll hand over my $35 for those 2,688 stitches.

Ten games is just too many
Kennedy: 'It doesn’t feel like anything ever happened'