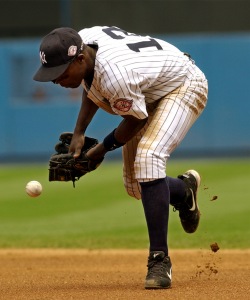 After the heartbreak of 2004, the Yankees needed a boost in 2005. From all appearances, the team’s biggest trouble in 2004 was its pitching staff. The team lost Andy Pettitte, Roger Clemens, and David Wells after the 2003 season, and replaced them by trading for Kevin Brown and Javier Vazquez. A year earlier they signed Jon Lieber while he was rehabbing from Tommy John surgery, and during Spring Training they signed old friend Orlando Hernandez. Those four, along with Mike Mussina, could have been a formidable rotation had they all been at their best. Of course, things like that never seem to work out in baseball.

In the 2004-2005 off-season, the Yankees blew up the whole project. Brown and Mussina stuck around because of their contracts, but everyone else was out. Lieber left for the Phillies, El Duque signed with the White Sox, and the Yanks traded Javier Vazquez for Randy Johnson. To replace the two departures, the team signed Carl Pavano and Jaret Wright. It was hardly a perfect solution. In fact, it seemed like more of the same, just with different names. Unsurprisingly, the team ERA, while numerically lower in 2005, ranked worse in relation to the league.

Clearly, the Yankees replaced very good pitchers with far inferior ones. In 2003 the staff posted a 3.66 FIP, second in baseball. In 2004 that jumped to 4.27, 12th in the majors. In 2005 it was just about the same, 4.28, but that ranked 15th. For years I thought the conversation ended there. Worse pitchers means a worse pitching staff. Not only were the five starters inferior to the ones in 2003, but injuries forced the Yankees to trot out even worse arms.

But as we learned in 2009, even a team with a middling pitching staff can post a quality ERA if it has quality defenders behind it. The 2009 Mariners posted a team 4.39 FIP, which ranked 9th in the AL. Yet their team ERA of 3.87 was No. 1. The difference was in the team defense. The Mariners posted a team 85.5 UZR, 16 runs better than the next best team. In other words, with a pitching staff perhaps negligibly better than the 2004 and 2005 Yankees teams, the Mariners still managed the top ERA in the AL. (Though, of course, having an ace like Felix certainly helps.)

Defensive stats weren’t widespread in 2003, but if they were perhaps the Yankees would have taken a different approach to rebuilding the pitching staff. The team UZR that year was -62.2, second worst in the majors and worst in the AL. In 2004 that was even worse, -76.3. To put that number into even more grave context, the second worst team, the Red Sox, were at -34.1. Yes, the Yankees defense in 2004 was more than twice as bad as the second worst team. While the pitching staff was not nearly as good as 2003, the worsened defense exacerbated the problem.

Yet that’s nothing compared to 2005. The Yankees, as a team, posted a -137 UZR. That’s a 137-run penalty due to their defense. The second worst team, the Reds, ranked at -67, so once again the Yankees were twice as bad as the next worst team. The second worst AL team, the Royals, ranked -52.4, so the Yankees were even worse when compared to their own league. Finally, to continue with the theme of worst, the -137 UZR is, by far, the worst team UZR since 2002, when we began tracking UZR.