The Yankees took Game One from the Orioles last night, and in Game Two tonight they’ll give the ball to the playoff-tested Andy Pettitte. The Orioles are starting a left-hander of their own, but not a veteran like Pettitte. Rookie Wei-Yin Chen will be on the bump for Baltimore, the first playoff start of his MLB career.

Chen, 27, was born in Taiwan but spent the 2005-2011 seasons pitching for the Chunichi Dragons in Japan, where in 2009 he posted the league’s lowest ERA (1.54) in more than 50 years. He was not only the sole Orioles’ pitcher to remain in the rotation from Opening Day through the end of the season, he was also the only pitcher to make more than 20 starts for the team. His 32 starts and 192.2 innings are both career highs (including his time in Japan, obviously), and Chen appeared to hit a bit of a wall in September. It’s not just the raw starts and innings totals, it’s also going from a once-a-week schedule to a once every five days schedule.

Chen’s first ever start in the big leagues came against the Yankees, who have handled him well three of the four times they’ve faced him. For whatever reason, the left-hander always seems to keep them off balance the first time through the order before the Yankees get to him the second and third times through. Maybe I’m wrong, but it just feels like that’s the case. The two underwhelming September starts fit the whole “hitting a wall” narrative. 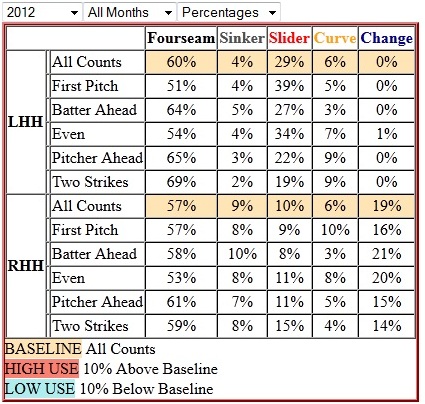 Chen may throw five different pitches, but his sinker and curveball are rarely used fourth and fifth offerings. He’s primarily a fastball/slider guy against lefties while going fastball/changeup against righties, which is not uncommon at all. The four-seamer resides in the 90-91 mph range and the velocity held constant throughout the year, which doesn’t fit the whole “hitting a wall” narrative. Chen’s slider sits right around 80 while his changeup is more or less in the mid-80s. The sinker is at the same velocity as the four-seamer while the curve is a slow bender in the low-70s. Yes, the low-70s. As the data in the table shows, Chen likes to pitch backwards a bit, especially against lefties. He’ll start them out with a breaking ball four out of ten times.

The story of the Orioles’ rotation is “small sample size,” as their starters in each of the first three games of the series only have one year of data to look at. Game One starter Jason Hammel completely changed his pitching style this season, and both Chen and Miguel Gonzalez (the Game Three starter) are first-year big leaguers. It sucks, but it is what it is. Anyway, opponents made sure to platoon their lineup against Chen and for good reason — he strikes righties out at a lesser rate than lefties while also generating fewer ground balls.

After carrying a 3.46 ERA (4.01 FIP) through his first 22 starts, Chen pitched to a 5.34 ERA (5.17 FIP) in his final ten starts of the season. That’s where the whole “hitting a wall” thing is coming from. He allowed at least five runs four times in those ten starts, and completed six full innings of work only five times. Right-handed batters tagged him for a .316/.356/.580 batting line with eleven homers in 192 plate appearances during that time, though the southpaw did hold fellow lefties in check (.220/.246/.356 in just 62 plate appearances). I assume Eduardo Nunez will get the start at DH over Raul Ibanez, and it goes without saying that the righties will have to carry the torch offensively against the Baltimore starter.