Once EA lost it’s license to produce MLB games, my interest in them basically disappeared. MLB 2005 (predecessor to The Show) was good, but it tended to freeze. And freeze. And freeze. And freeze some more. MVP 05 was great in every possible way, especially since it included the..ahem…likenesses of Phil Hughes, Eric Duncan and Marcos Vechionacci. However, that franchise went kaput once MLB sold out for exclusive licensing.

EA came out with MVP 06 NCAA baseball about a year ago, and I was instantly hooked. The gameplay was phenomenal as always, and the excitement of the college atmosphere was as good as it gets. I started a Dynasty with my Nittany Lions, and played over 4 seasons without so much as getting bored. However, do to a freak PS3 accident, my saved data was corrupted, and my team was lost forever (I was on pace for my first trip to Omaha, go figure).

But last weekend I was home watching my fianceeâ€™s younger brother, who just so happened to have a copy of The Show 07. I checked it out, played a game or two, and was sold. I stole his copy bought a copy of my own and started a Franchise with the Pirates (I hate the DH, and I love that ballpark). Instead of sticking with the default rosters, I went for a good olâ€™ fantasy draft, where I picked exactly 1 player over 26 years of age (Oswalt).

The Franchise mode is very deep, but to a fault: Iâ€™m not really interested in changing ticket prices or managing my advertisements, I just want to play baseball. The controls are good, though the push button batting isâ€¦how do you sayâ€¦outdated. The pitching is the same old meter, which leaves something to be desired. The fielding is decent, though sometimes flyballs can be an adventure. Thereâ€™s tons of custom animations, if you want to see the Broxton pirouette, itâ€™s there. The Matt Morris bobblehead, itâ€™s there. The Joe Morgan chickenwing, itâ€™s there. Heck, Jeter even holds out his right arm before taking his stance, basically telling the ump â€œslow down bitch, I ainâ€™t ready yet.â€

Some of the player ratings are straight up wrong. Kei Igawa is not better than Dice-K, David Ross is not the best player on the Reds, nor is Anibal Sanchez the Marlinsâ€™ best player. Little things like that take away for the game. Oh, and none of the player contracts are correct, theyâ€™re basically pulled out of mid air. The minor league stuff is okay, the biggest drawback is the lack of a Single-A level (thereâ€™s only AA and AAA).

Iâ€™d give it a solid B, thereâ€™s a lot of little things that take away from what should be a great game overall. I say wait until you can pick up a used copy for $15. 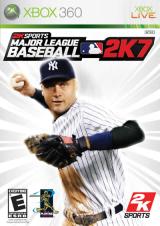 Ever since I shattered a controller playing Madden — my annual indication that I’m done with the game until it is re-released in August — I’ve been awaiting the release of MLB2k7. I was reluctant to buy the game last year, because I thought MVP was the be all, end all of baseball video games. But after playing the craptacular “MLB: The Show,” I was left with little other choice.

I fell in love with the game, though. The pitching system was sleek, and I eventually grew used to the Tiger Woods-esque hitting system. I actually like it a ton better than the MVP hitting system, which at one time I thought was the closest simulation possible. In short, I was sold.

I’ve had March 5th circled on my calendar for a while now, and planned to buy the game on my lunch break this past Monday. You can imagine my excitement and ensuing disappointment when on Saturday night I found out that it had been realeased on Feburary 26th. Why disappointment? I had made the discovery at 10 p.m., when all major retailers were closed. I searched endlessly, but there was no place within a reasonable driving distance open 24 hours.

The worst part of all: I live in Bergen County, NJ. Anyone familiar with the area knows that, by law, retail and other “non-necessary” businesses must be closed on Sundays.

Bah, like that would stop me. Across the New York border it was, and I came home with my beloved copy of the game. Within minutes, I had a GM career set up and ready to go with the San Francisco Giants. The reason being: I was excited as hell to use both Matt cain and Tim Lincecum. But wait…no Lincecum? What the hell?

This led me to browse the Yankees roster. And guess what? No Phil Hughes. This was particularly troubling, because he had appeared in MLB2k6. But I shook it off and continued my season with the Giants.

The gameplay, hyped as being revamped from last year, is still just like the original. It’s still highly possible to miss a routine fly ball, though the ground ball fielding is a bit improved. Hitting has the same old flaws: the bunt button doesn’t always work, you can’t pull back diagonally on the R stick in any way, or you won’t step, and I even had an at-bat that was started with the hitter facing the catcher. And pitching is exactly the same as 2k6.

The GMing aspect is also exactly the same. You can cut people and shave that money off the cap; rarely do you see a Boras-esque contract demand; your minor leaguers don’t progress well; trades are ridiculously lopsided. The latter is linked directly to the ludicrous player ratings — J.D. Drew is a 100. Hell, Randy freakin’ Winn is a 95.

I sit here today without a longing desire to get home and play the game, when a year ago I would be comping at the bit. Not only do I feel like I wasted $30, but I also wasted my time driving to New York to purchase it. My recommendation: just play 2k6.