River Ave. Blues » Yankeemetrics: Going going gone, Bombers roll over Rangers (Aug. 9-12)
Fan Confidence Poll: August 13th, 2018
With his dreadful May in the rear-view mirror, Didi Gregorius is back to being an impact player

Bombs away
Back in the Bronx for a season-high 11-game homestand — their longest since June 2005 — a home run derby erupted as the Yankees beat up on the Rangers in series opener, 7-3. Aaron Hicks kicked off the fireworks with a two-run blast in the first inning, his 20th of the season. He is the fourth Yankee to reach that milestone this season, tied with the Indians for the most 20-homer players in MLB.

Hicks also is the third Yankee outfielder to hit 20 longballs this season. This is the fourth time in franchise history they’ve had three guys hit 20 homers and play at least 60 games in the outfield (yes, Stanton has played 60) in the same season.

Miguel Andujar and Neil Walker launched back-to-back homers in the fourth inning, Stanton added a massive laser shot in the fifth and Walker capped the dinger party with another solo shot in the sixth.

Stanton’s 449-foot missile left his bat at 121.7 mph, the fastest exit velocity of any home run measured by Statcast (since 2015), and the hardest-hit ball — out or hit — in the majors this season. Another #StatcastFunFact: through Thursday there have been 10 batted balls with an exit velocity of 119 mph or more this season … and all 10 were hit by Yankees (Sanchez and Judge each have one, Stanton has eight).

For Walker, it was his sixth career multi-homer game but the first time he’s homered from both sides of the plate in the same game. Walker is the only player in franchise history to achieve the feat as a second baseman in a game.

Bombs away, the enemy version
The Rangers got revenge on Friday night with their own dinger party, crushing four homers to beat Yankees, 12-7. Masahiro Tanaka’s gopheritis returned as he coughed up three homers and was torched for six runs in five innings. He had been excellent in his first five starts off the DL, posting a 1.78 ERA with 36 strikeouts in 30 1/3 innings, but regressed badly on Friday night:

Masahiro Tanaka Since Return from DL

Rangers first baseman Ronald Guzman stole the highlights with his unprecedented three-homer night, becoming the first rookie ever to go deep three times against the Yankees. At the age of 23 years and 294 days old, he also was the second-youngest player to hit a trio of bombs against the Bronx Bombers, behind only Indians outfielder Pat Seerey (22 years, 118 days) on July 13, 1945.

Mighty Miggy saves the day
The Yankees pulled out an ugly 5-3 win on a rainy Saturday at the Stadium, surviving a bullpen meltdown thanks to another clutch hit by Miguel Andujar. Lance Lynn delivered a third straight solid outing in pinstripes, and the one run he allowed in the third inning is the only scoring blemish on his Yankee resume so far.

He also etched his name in the Yankeemetric record books with these two #FunFacts:

Ace Sabathia
Backed by a vintage gem from CC Sabathia and more bombs from the bats, the Yankees clinched the series win over the Rangers with a 7-2 win on Sunday. They still have lost just one series at home this season, April 5-8 against the Orioles.

CC Sabathia carved through the Rangers lineup with his signature arsenal of well-located cutters and sliders, allowing a season-low one hit — a dribbler in front of the plate. The only ball in play he allowed to the outfield (excluding Andujar’s error) was a warning-track flyout in the third inning. Otherwise, lots of groundouts and seven strikeouts: 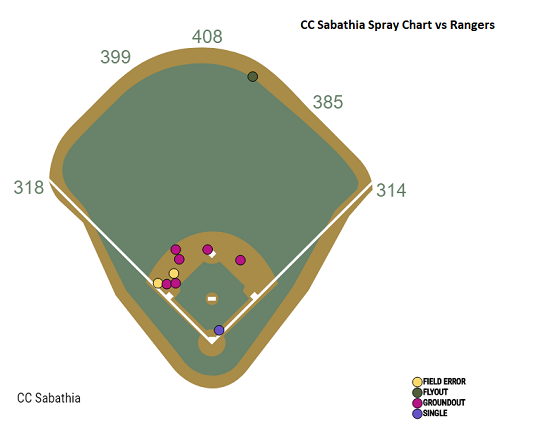 Sabathia did have to pitch around six baserunners, but did so masterfully, with six scoreless innings. He’s held batters to a .156 batting average with runners in scoring position this season, the third-lowest in the AL and seventh-lowest in MLB among qualified starters.

Giancarlo Stanton lit up the scoreboard early with a bullet line drive homer in the first inning, his 30th of the season. It was also his 16th longball in a two-strike count, tied for the most in MLB this season. Looking ahead … no Yankee since 1988 (when we have official pitch count data) has finished a season with at least 20 homers and more than half of them coming in two-strike counts.

Fan Confidence Poll: August 13th, 2018
With his dreadful May in the rear-view mirror, Didi Gregorius is back to being an impact player