Why you ask? Because their likely replacements will probably outperform them.

Chase Wright is not the answer. If you think he is, then I hope the simplicity of calling him up because he’sÂ lined up to start Tuesday and is already on theÂ 40-man rosterÂ comforts youÂ when he gets his brains beat in. Start the process of dumping Colter Bean and Jeff Kennard off the 40-man (seriously, why do these guys have a spot anyway? They’re dead weight), and get Hughes andÂ DeSalvo ready to go.

IÂ can’t fathomÂ why everyone’s afraid to call Hughes up. He’sÂ learned as much as possibleÂ in the minors, he’s as ready as he’s going to get, and the Yanks haveÂ the need for him. The Yanks can show some confidence inÂ Mighty Matt after his dominant outing, and help him further get back on track.Â

It’s an ideal situation: they’re low risk moves with the potential for great reward, plus they’re nice and easy to back out of.Â

FYI, Britton got the call to reinforce the pen for the next couple of days.

Let’s get a little discussion going: who should fill in for Moose and Meatball, why, and how will they fare?

Update: The Yanks have decided who will start Tuesday, but won’t announce who it’ll beÂ until the player has been notified. Translation: Double-A Trenton will need to find a starter for Tuesday. Sigh.

I can’t believe I have to campaign for a Phil Hughes promotion….

Update Part Deux: It’s Chase “I’m half the pitcher Hughes is, but I’ve made 2 great starts in a league I’m too old for after having 1 good year since being drafted in 2001” Wright. I’m not bitter… 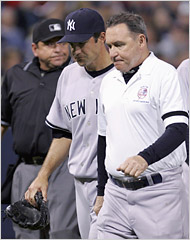 Someone really ought to teach the Yanks how to stretch. First, Wang, then Hideki and now Mussina all go down to a hamstring bug. Mussina claims he’ll only miss a start, but that’s what everyone said last year about Robbie Cano before he missed 35 games.

Meanwhile, as Peter Abraham points out, you’ll be hearing Marty Miller’s name a lot over the next few days. He’s the new director of performance enhancing, and as The Times noted over the weekend, his new strenuous routine may be responsible for this rash of injuries. Check yourself before you wreck yourself, Marty.

(In case you’re wondering, Moose was a participant in Marty’s program. That voluntary involvement may have ended in the third inning tonight.)

Meanwhile, A-Rod went 1 for 3 with an RBI and continued his hot hitting. But outside of a 2 for 4 night for Johnny Damon, the Yanks’ bats were silent. A few nice plays in the field concluded the Bombers’ part of the highlight real. Derek Jeter turned a nifty double play on an over-the-shoulder catch, and Doug Mientkiewiczi made a nifty dive on a shot down the line.

The story tonight though, which Joe and I were discussing during the game, was the Big V: Velocity. Proctor didn’t have it, and Krazy Kyle â€” he of the leadoff walk, loss and 4 ER in 0.1 IP tonight â€” didn’t have it either. The gun readings showed these two power pitchers reaching the low 90s instead of their usual upper 90s. Maybe it’s a dead arm period after Spring Training; maybe it’s Marty Miller’s fault; maybe we could find a way to blame A-Rod. But it’s a concern.

Anyway, as long as Ron Villone doesn’t show up in the Bronx, and Fransworth and Proctor rediscover their heat, we’ll be ok. Two out of three in Minnesota is the way to go.

Image of Mussina leaving the field with Gene Monahan from The New York Times.

Mike Mussina left the game with a strained left hamstring tonight. The left hamstring is his landing leg, and as John Flaherty just said, the Yanks will allow Mussina to fully heal. It could be three weeks or more for Mussina. Somewhere, Roger Clemens’ phone just rang, and somewhere else, a young pitcher who’s supposed to start tomorrow night may not take the mound for Scranton-Wilkes Barre.