With the Chicago Cubs clinching the NL pennant, earning a spot in the World Series opposite the Cleveland Andrew Millers, one of the two longest World Series droughts in baseball will come to an end. Many have noted all the stuff that’s happened since the Cubs had last been in the Fall Classic (1945) and this will be the first time the Cubs franchise will play in a World Series that features players of color.

As it has been since 2009, rooting in the World Series will be relatively stress free. That’s the one upside of the Yankees missing the playoffs that I always mention this time of year. Watching playoff baseball–or any sport’s playoffs, for that matter–without having to live and die with each pitch is a wonderful experience. Granted, the combination of having an infant with me and the 8 PM start times, I really only get a few innings of stress-free enjoyment until the Sandman–and I don’t mean Mariano Rivera–comes and gets me.

When the World Series ends, awards season begins to kick off the Hot Stove season. I used to be very into this time of year, getting very passionate about whom I thought should win, spilling a lot of digital ink and dying on a lot of digital hills about this. Still, that doesn’t mean I’ve abandoned the idea of having opinions about this thing. Without doing any sort of real research, my picks for the awards are:

AL MVP: Mike Trout. It should just be Trout until…whenever? I know there are cases for other players this year, but the MVP is Mike Trout and probably will be Mike Trout next year, too.

NL MVP: Kris Bryant. Great year? Check. Successful team? Check. A narrative? Check. Dude’s probably got this in the bag and has for a long while.

AL Cy Young: Masahiro Tanaka. Why? Because I’m being a homer, dammit, that’s why.

NL Cy Young: Jose Fernandez. Call this a sentimental pick, but I don’t care. Jose Fernandez and the way he approached baseball represent everything good and right about the game. His attitude made baseball fun for him and those around him in myriad ways. The voters should honor his spirit with this year’s award, then create an award named after him from here on out.

NL ROY: Cory Seager. This one is so obvious it’s almost boring. If you wanna throw Trea Turner a vote or two, fine, but it’s likely to be Seager, as it well should be.

Once again, the Yankees are going to look way different next year than they did this year. Alex Rodriguez and Mark Teixeira are gone. It’s possible that one of Brett Gardner or Brian McCann will be gone. It seems that the team’s only constant has been change lately, though this year’s additions may be a bit harder to predict. I’m sure they’ll go after a big bullpen arm, but beyond that, I’m really not sure. But, either way, I’m looking forward to seeing a new group out there for 2017, especially when that means full years from Gary Sanchez, Aaron Judge, and hopefully Greg Bird.

For the majority of the season the Yankees have really struggled to score runs, and you can’t single out one guy as the culprit. It takes a total team effort to rank 24th out of the 30 clubs in runs per game (3.57) more than a month into the season. Starlin Castro has been the team’s only consistently productive hitter, I’d say.

A year ago the Yankees had one of highest scoring offenses in baseball overall, and one of the biggest reasons was regular cleanup hitter Mark Teixeira. He hit .255/.357/.548 (143 wRC+) with 31 home runs in 111 games before going down with a small fracture in his shin. Teixeira turned back the clock and was one of the game’s best power hitters.

That has not been the case this season. Far from it. Through 30 team games Teixeira is hitting .202/.325/.298 (82 wRC+) with only four extra base hits. (A double and three homers.) It has been 23 games and 94 plate appearances since his last home run. That is quite bad. Teixeira is not a complementary player. He’s a cornerstone piece of the offense and he isn’t helping much right now.

“It’s only natural that you want to help carry the team, but I’ve always been someone that’s done that,” said Teixeira to Dan Martin yesterday. “As a middle-of-the-order hitter, it’s kind of what you’re there for, to drive in runs. You can carry a team for weeks or months at a time. This is nothing new for me to deal with.”

Here are Teixeira’s ball in play splits dating back to the start of the 2014 season. I’d normally go back three full years, but wrist surgery limited Teixeira to only 15 games in 2013.

Everything looks okay from the right side of the plate this season. Teixeira’s batted ball profile is generally in line with last year’s, which is what we want to see. He was pretty awesome last year. It goes without saying this is all coming from a small sample, but so far, so good as a right-handed hitter.

The left side is where Teixeira is having big problems. He’s still pulling the ball a ton, but he’s not making as much hard contact and he’s not hitting the ball in the air. More weak contact on the ground as a left-handed batter means more balls that get eaten up by the shift. It’s actually kinda surprising Teixeira’s batting average isn’t lower, to be honest.

Before we move forward it should be noted Teixeira’s plate discipline has been fine. More than fine, really. He has the 23rd lowest swing rate on pitches out of the zone in baseball (22.7%), and his overall contact rate (80.3%) is right in line with his career norm. Teixeira’s not expanding his zone and hacking at bad pitches. That’s not causing all those extra ground balls as a lefty hitter.

Teixeira said he was working to correct a timing issue near the very end of Spring Training, and it’s possible that timing issue is still, well, an issue. He does the most damage as a left-handed hitter when he can extend his arms and punish a pitch on the outer half. Here’s the pitch location of every ball Teixeira hit 100+ mph last season from the left side of the plate, per Baseball Savant: 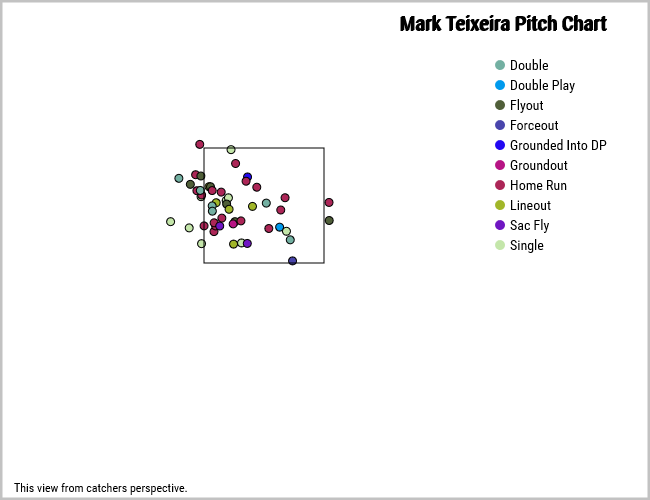 That is some plate coverage, huh? The guy is a big time power hitter playing his home games in Yankee Stadium, so as pitcher you’d think the best place to go is away, but nope. That is Teixeira’s wheelhouse. It takes a long swing to get to those outside pitches, so if his timing is off even a tiny little bit, it can be the difference between loud contact and something off the end of the bat.

Of course, it’s possible Teixeira’s timing is off because he’s 36 and his bat is slowing. It’s not necessarily a mechanical issue. That said, even old players still hit home runs, and I feel like Teixeira going 94 plate appearances (!) without a dinger is indicative of a mechanical problem more than a “he’s old” problem. What about injury? What if he’s not using his lower half the way he normally does following the shin fracture? Teixeira is not hitting for power because he’s not hitting the ball in the air from the left side of the plate. Why is he not lifting the ball? That’s the mystery.

“There’s no reason I should be struggling like this,” added Teixeira. “It’s been a tough few weeks. I’ve just got to get the ball in the air. I’ve been hitting too many ground balls and soft line drives … My whole career has been about back-spinning the ball, hitting the ball in the air and home runs. I’m just not doing that right now.”

The Yankees obviously still want to climb back into the postseason race this summer, and they’ll need Teixeira to get back to mashing baseballs to do that. And even if they continue to lose, they want him to be productive so they at least have the option of exploring trading him. Who knows whether Teixeira will waive his no-trade clause. But if he doesn’t start hitting, it won’t matter. No one will want him.

The silver lining here is that unlike some of the team’s other veterans, specifically Alex Rodriguez and Carlos Beltran, Teixeira can still contribute with his glove when he’s not hitting. He’s still a great defensive first baseman. That’s not enough though. Teixeira is still getting on base thanks to his walks, so he’s not totally useless at the plate, but the Yankees need him to start hitting the ball out of the park, and he needs to get the ball airborne for that to happen.

Via Jon Heyman: The Yankees are currently focusing on Brandon McCarthy, Chris Capuano, and Jason Hammel as they look to upgrade their rotation heading into next season. Heyman reiterates the club is unlikely to pursue Jon Lester or Max Scherzer.

Just a heads up, our 2015 Draft Order page is finally up and running. You can keep track of draft picks as they change hands via free agent compensation there. The Yankees currently hold the 19th overall pick but could very well lose that if they sign one of the 12 free agents who received a qualifying offer. They could also gain a supplemental first round selection if David Robertson signs elsewhere. The 2015 Draft Order page is available at all times via the Resources tab under the street sign in the banner at the top of the page.

Brett Gardner underwent core muscle surgery to repair his right rectus abdominis muscle on October 16th, the Yankees just announced. The surgery was performed by Dr. William Meyers at the Philadelphia Vincera Institute in Philadelphia, PA. The team didn’t give any details about Gardner’s rehab timetable, but his agent told Dan Barbarisi it’s not serious and he will be back to 100% this month. Gardner played through an abdominal injury for most of the second half.

According to Jay Weaver of the Miami Herald, Alex Rodriguez admitted to purchasing and using performance-enhancing drugs from Biogenesis in a January meeting with federal agents and prosecutors in exchange for immunity. He told them he paid Anthony Bosch approximately $12,000 per month for the drugs. A-Rod publicly maintained he did not use PEDs even after the meeting, though we all knew that was a lie. Weaver’s article is Alex’s confession. Really great piece of reporting. Anyway, it’s November 5th and I already have A-Rod fatigue. Sigh.

The Yankees have outrighted outfielder Antoan Richardson to Triple-A Scranton, the team announced. There are now 34 players on the 40-man roster. Richardson, 31, hit .271/.380/.364 (114 wRC+) with 26 steals in 27 attempts in 93 games for the RailRiders this summer before getting called up in September to serve as the club’s designated pinch-runner. He went 5-for-16 (.313) with five steals in 13 games for New York. Richardson will become a minor league free agent this week.