River Ave. Blues » Hitting the opposite way a key for Granderson in 2010
2010 Season Preview: Can Swish do it again?
Link Dump: Options, Spring Training, Starters 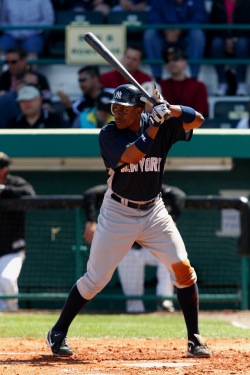 In previewing Curtis Granderson’s season, I noted that his rebound to 2008 levels is essential for the Yankees offense. That would represent a replica of Johnny Damon’s 2009 season, making Granderson the perfect fill-in. How, though, will he return to those levels? Clearly, hitting lefties better is a good start. But what then? Where else was Granderson deficient in 2009?

In 2009 Granderson got back to his 2007 level distribution, hitting 21.6 percent of his balls in play the opposite way. His numbers on those balls in play dropped greatly, too, a .179 batting average and a .047 ISO. Of course, as in his 2007 season, his numbers when pulling spiked, a .385 BA and .405 ISO. Even better for him, he hit 259 balls that way, far more than at any point of his career, representing 52.3 percent of his balls in play. Yet the net effect was negative, and Granderson posted the worst BA and OBP of his career.

Granderson’s poor contact to the opposite field in 2009 shows in his batted ball splits. He hit a career high 73.6 percent fly balls to left, though it wasn’t terribly higher than his 70.8 percent mark in 2008. The difference, however, showed up in two other places. First, he hit 24.4 percent of those opposite field fly balls to the shortstop or third baseman. That means of the 79 fly balls he hit to left, 19 of them didn’t leave the infield. Even worse, zero of those 60 outfield fly balls left the yard. Granderson never flashed tremendous home run power to left, but he’s always put at least a couple out of the yard. Not in 2009.

While Granderson’s issues against lefties are well-documented and easily accessible, his numbers when hitting the opposite way also present cause for concern. During his run from 2006 through 2008 Granderson generally hit well the opposite way; even in his pull-happy 2007 he still far outperformed his 2009 marks. We’ve often heard that the left field porch at Yankee Stadium could help Granderson, but perhaps it could work against him. If he starts trying to put balls there it could hurt his numbers going the opposite way. As we’ve seen, his inability to hit that way in 2009 played a prominent role in his poor performance.