In his first eleven starts of the season, Masahiro Tanaka has been dominant and one of the very best pitchers in all of baseball. I expected him to be very good this year, but not this good. No adjustment period, no bumps in the road, nothing. Even his bad starts are still pretty good. Tanaka’s been the rock in the rotation and he’s making the Yankees look very, very wise for their much-criticized $175M investment.

In his first eleven starts of the season, Tanaka has faced ten different teams. The only team he has faced more than once is the Cubs of all teams. An interleague rival the Yankees won’t see for another three years. There are still seven AL clubs that have yet to see the former Rakuten Golden Eagles ace. The schedule has worked in Tanaka’s favor and he’s had the element of surprise going for him in all but one of his starts.

Tanaka’s worst start of the season was that second game against the Cubs two weeks ago. He allowed four runs (three earned) on eight hits in six innings, the only time he’s allowed more than three earned runs in an outing. It was raining for a good chunk of that game remember, and the rain surely could have affected his performance. He didn’t look all that comfortable on the mound, I remember that much. That said, the Cubs acknowledged seeing Tanaka once before did help them out.

“If you look at the first game, we were having trouble hitting the ball out of the infield. If a guy is throwing the ball down, you’re going to hit a ground ball,” said catcher John Baker to David Lennon. “Our goal was, when we get something up in the strike zone, to get a swing off. Whether it’s the first pitch or 0-and-2, we were looking more up as opposed to for our pitch. Generally, across the board with the lineup, I think we executed it pretty well.”

Tanaka did indeed leave some pitches up in the zone against the Cubs — here is the pitch location for the eight hits, six of which were belt high — and he paid for it. They still couldn’t lay off the splitter, swinging at 18 of the 23 he threw, missing nine times. That 50% whiff rate is basically identical to the splitter’s 49.2% whiff rate for the season. He just made some bad pitches and he paid for them. That’s baseball.

One thing we’ve seen from Tanaka in his first eleven starts is that he will leave some pitches up in the zone, but he’s had a tendency to get away with them. There have been a lot of swing-throughs on handing sliders and just plain old called strikes on pitches up in the zone. Here is Tanaka’s pitch location heat map for the season. The darker the red, the more pitches in that particular zone compared to the league average: 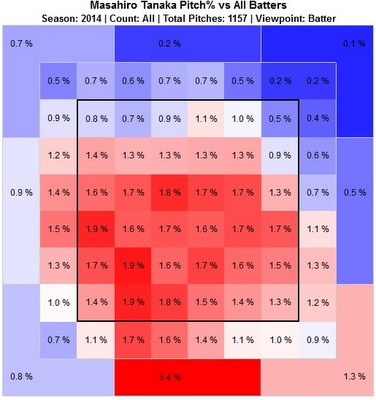 So yeah, compared to the rest of the league, Tanaka has definitely left more pitches basically in the middle third of the strike zone and higher. The PitchFX data backs up the eye test in this case. That many pitches up in the zone is generally a bad idea, but I also think Tanaka’s unpredictability — PitchFX says he’s thrown eight different pitches this year, including four at least 20% of the time each — allows him to get away with those pitches more often than the average pitcher. I don’t know how we could go about investigating that, it’s just a thought.

Tanaka will face the Athletics tomorrow, the Mariners next Tuesday, and then the Athletics again the following Sunday, barring rainouts and whatnot. After that, the Yankees play 15 straight games against AL East rivals, teams that have already seen Tanaka once this year. So, after these next two starts against the A’s and Mariners, he’ll run into a stretch of games against clubs he has already faced. The element of surprise will be gone. Those teams will have a first-hand scouting report and experience seeing him, which tips the scale in the other direction slightly.

Everything in baseball is designed to give the pitcher the advantage. Hitters need four balls to draw a walk but pitchers only three strikes to make an out. The offense needs to travel four bases to score a run yet the pitcher only needs three outs to end the inning. Heck, the pitcher even stands on a mound raised above the rest of the playing field. The pitcher controls the at-bat and it’s up to the hitters to first make the adjustment to him, not the other way around. If what worked for Tanaka the first time through the league works again, then he has no reason to change.

If it doesn’t work though, I think he has more than enough weapons to adjust and remain a top flight starter. I mean, is Tanaka going to maintain a 2.06 ERA and 2.52 FIP all season? No, probably not. Even in this offensively starved era that is still an unrealistic standard for a guy in a tiny ballpark in the AL East. Tanaka does have two put-away offspeed pitches in his slider and (especially) splitter, plus he’s shown he will pitch to both sides of the plate and dot the edges. And the dude has no fear too. That’s not nothing. The second time through the league is coming up and it will be a test for Tanaka. He has the tools to succeed though. His success to date is no fluke.