Overall, this has been a trying season for Masahiro Tanaka. Given all the success he had in Japan and in his first three seasons with the Yankees, this has to be the most difficult season of his career. This is the first time he’s really struggled. I don’t mean for one or two starts. For an extended period or time. The All-Star break is only two weeks away, and he’s sitting on a 5.74 ERA (5.27 FIP) in 84.2 innings. Yuck.

Last time out Tanaka was excellent, striking out nine in eight shutout innings against the Rangers. He allowed three singles and two walks. That’s all. We’ve seen some flashes of brilliance from Tanaka this year, so we know it’s still in there. We just haven’t seen it consistently. Hopefully that start against Texas was a sign of things to come. Given how the season has played out, it’s way too early to say Tanaka has turned the corner.

Anecdotally, it seems Tanaka’s problems stem from his splitter and slider, his two go-to pitches. He’s not overpowering by any means. He succeeds by keeping hitters off balance with the splitter and slider. This year, for whatever reason, those two pitches haven’t behaved properly. Sometimes they do! And when they do, Tanaka has a start like he did against the Rangers. When they don’t, it’s a Home Run Derby.

For the most part, whenever Tanaka has allowed home runs this year, they’ve come on pitches that didn’t do what they were supposed to do. That usually how it works, right? Rather than dive out of the zone, those pitches stay up and get hammered. Here are the pitch locations of the 21 (!) home runs Tanaka has allowed in 2017, via Baseball Savant: 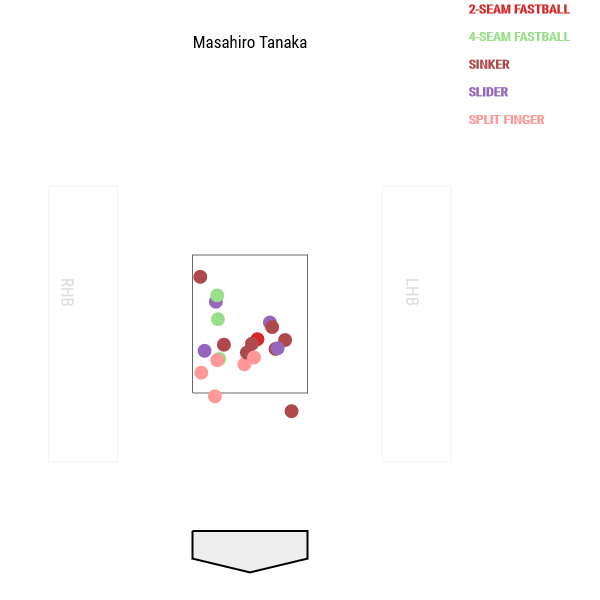 Five of those 21 home runs have come on splitters and four have come on sliders, and, as you can see in the plot, those pitches were left up. There’s no bad luck here. We haven’t seen someone go down and golf a diving splitter into the short porch or something like that. No, when Tanaka has been taken deep, it’s been a bomb on a pitch sitting middle-middle.

Since Tanaka has had trouble getting his splitter and slider to do what they’re supposed to do for much of the season, I figured it would be a good idea to look at the spin rate of each pitch. Spin rate is similar to velocity in that it’s not everything there is to pitching. It’s one tool in the shed. Spin rate could, possibly, shed some light on why the slider and splitter aren’t doing what they’re supposed to do. So let’s get to it, shall we?

Let’s get a few things out of the way first. One, spin rate is expressed in revolutions per minute even though it takes less than half-a-second for a pitch to reach the plate. Two, spin rate data only goes back to 2015, so that’s as far back as I went. I’d like to compare Tanaka’s pre- and post-partially torn elbow ligament spin rates, but alas. Can’t be done. And three, I looked at the spin rates on a month-by-month basis. Start-by-start is extreme overkill. Here are Tanaka’s splitter spin rates: 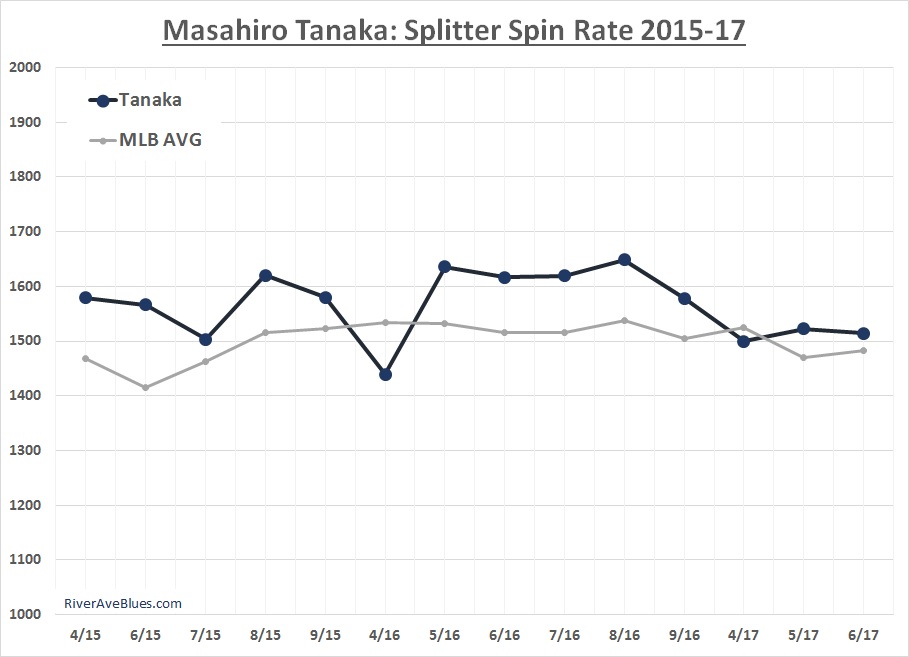 The spin rate on Tanaka’s splitter is down noticeably from last season, when he was one of the top pitchers in the American League. Spin rate is complicated though. More spin (and less spin) means different things for different pitches. High spin on a fastball correlates well to swings and misses while a low spin rate correlates well to ground balls, for example.

For a splitter, a low spin rate is actually better. A lower spin rate equals more tumbling action, and that leads to both more grounders and swings and misses. The higher the spin on a splitter, the more it acts like a true fastball. In theory, spin rate says Tanaka’s splitter this year should be getting more grounders and whiffs than last year because it has less spin, and:

Well look at that. Tanaka’s swing and miss rate on his splitter is up 8.3 percentage points from last year. That’s pretty significant. Going from 33.2% whiffs to 41.5% whiffs is huge. (The MLB average on splitters is 34.4%.) The ground ball rate is down 1.3 percentage points, which is relatively tiny. For all intents and purposes, the grounder rate has held steady since last year while the swing and miss rate has gone up quite a bit.

Okay, so what the hell does that mean? I’m not sure, exactly. But! This is actually good news, right? Or maybe it would be better to say this is not bad news. I’d be worried if Tanaka’s splitter spin rate jumped a bunch this year. That would indicate far more “straight” splitters, or hangers. On a macro-level, the splitter is doing exactly what it’s supposed to do. On a micro-level, some individual splitters are not, and those are the ones getting hit a long way. Those are the mistake pitches. 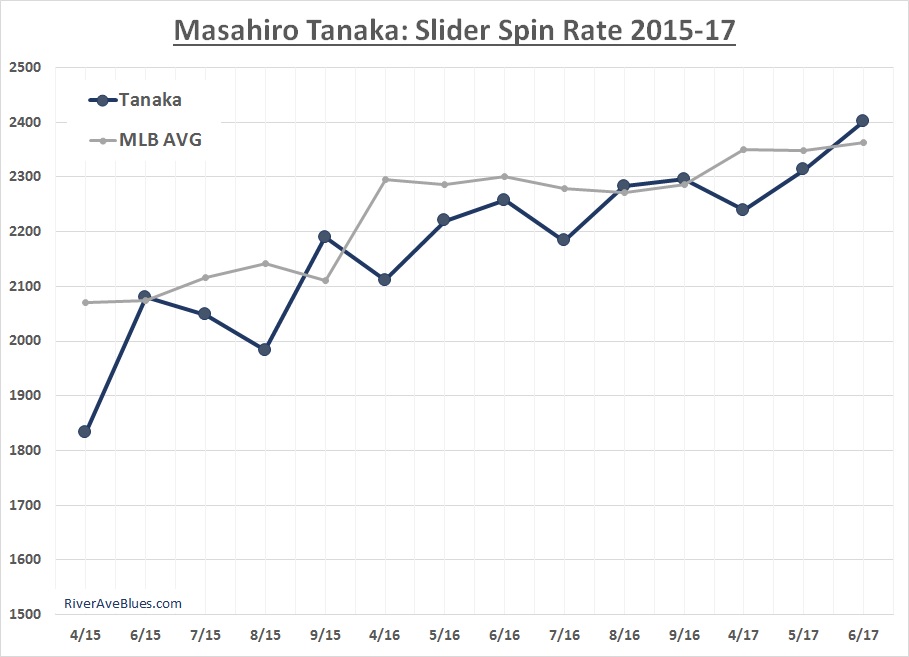 Anyway, it sure looks like teams have really started emphasizing slider spin the last few seasons, and Tanaka’s slider spin rate has climbed along with the league average. It’s gotten better and better with each passing month so far this season. Not coincidentally:

As Tanaka’s slider spin rate has gone up, hitters have come up empty with more of their swings against the pitch. The MLB average swing and miss rate on sliders is 34.9% this year, and Tanaka has been well above that in April and May. It’s probably not a coincidence then that Tanaka’s four highest strikeout totals this season have come within his last six starts.

Tanaka’s slider spin rate this season is good news. It’s getting better and the pitch is missing more bats. Similar to the splitter and a high spin rate, I’d be worried if Tanaka’s spin rate on his slider was way down. Overall, it’s been great. It’s those one or two (or three or four) mistake pitches per start that have cost him dearly. Limiting those is the key going forward, which is something we probably already knew, huh? Yeah.

All things considered, the spin rates on Tanaka’s splitter and slider are right where they should be so far this season. That’s good! That’s at least an indication he’s not broken for good. I never really through that was the case though. If it were, Tanaka wouldn’t throw these random great starts every once in a while. This leads me to believe his problems are mechanical, which is what he’s said since Spring Training. Funny how that works.

With Tanaka, he can never be a normal pitcher and just struggle. Every time he has a bad game or a bad stretch of games or hell, even throws a bad pitch, it’s because of the elbow. Always the elbow. That’s lazy though. We’re better than that. If Tanaka’s elbow were acting up, he wouldn’t be able to spin the baseball the way he normally does, and right now the overall spin rates on his slider and splitter show no red flags.