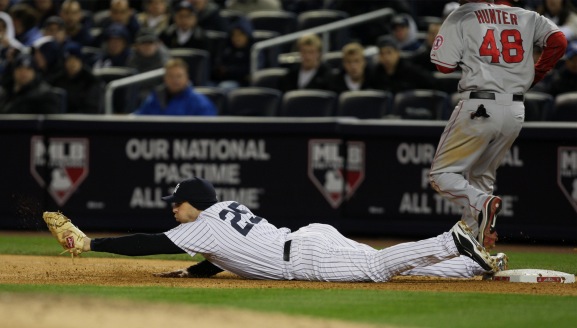 Mark Teixeira plays a mean first base. We’ve known this for a while. He quickly established his reputation in Texas, and for six or so games per year from 2003 through the first half of 2007 we got to see it ourselves. He just seems graceful patrolling the bag, snagging tough one-hoppers and picking low throws out of the dirt. In 2009 we got a real treat in watching Teixeira ply his craft every day. He resembled a ballerina compared to his predecessor, Jason Giambi. I think Bob Klapisch nailed it when he described Giambi as being “as graceful as Herman Munster around the bag.”

That quote comes from an article Klapisch wrote about Mark Teixeira’s UZR. For the second time in the past three seasons his UZR fell below the league average. We’ve discussed this issue in the past, and have heard many people claim that the gross misrepresentation of Teixeira’s defense proves that the statistic is useless. This couldn’t be further from the truth. While UZR might not cover everything that makes a first baseman, it still does tell us important things about defensive range.

As I covered in the UZR primer, the statistic is primarily concerned with assigning credit and blame on balls in play and comparing that to the league average. This can cause confusion in zones between two positions, such as second and first base. Maybe Yankees’ opponents hit an inordinate number of balls to that side. Maybe opponents ended up taking two bases, thus hurting Teixeira’s UZR more than a mere single. Maybe he wasn’t positioned optimally. There are plenty of reasons why, in this one season, his UZR — in specific the range component — was below league average.

Again, this does not discredit UZR, but perhaps points out some of its inefficiencies. It doesn’t factor in player positioning, and it certainly doesn’t assign first basemen extra credit for scooping balls out of the dirt. When we look at a first baseman’s UZR, we have to recognize that it will not tell us these things. It will tell us only what goes into it, and that mostly involves how often a player turned a batted ball into an out, in a particular zone, compared to the league average. For the other aspects of manning first base, we’re on our own.

To that end, I don’t think anyone would argue that Teixeira played a poor first base last season. At the very least, everyone was happy enough to see an improvement over Giambi. Yet there is an important point to keep in mind. What we tend to remember are the plays he did make. The one hopper that he snagged as he was falling down. The dive to get a ball headed for the hole. The scoop on a three-bouncer. What we probably don’t remember, what we might not even notice, are the balls he just doesn’t get to. I’m not saying that Teixeira didn’t get to all these grounders that other first baseman would have. I’m saying that it’s possible that he did miss a few plays, and that we don’t remember them because they weren’t particularly noteworthy at the time.

Also keep in mind that UZR works with small samples. How many chances does a first baseman get to field a ball? Fewer than shortstop and second base, and we normally take three years’ worth of UZR data to get a read on those positions. Over the past three years, and for his career, Teixeira’s UZR is positive. It’s not massively so, but he’s certainly not rated below average. I suspect that we’ll see him in the positive again in 2010. These things tend to even out over time.

Sorry, but I couldn’t let these two utterances, one from Tex and the other from Klapisch, fly by without a comment.

Teixeira: “Look, if computers could run the game, why bother having general managers?” Because you need people to analyze and interpret the data. Also, no one’s arguing that computers should run the game in the first place. Also, scouts have their place, and it’s no marginal, second-class citizen status. Numbers are just a recording of what happened on the field, but we need to go much further in order to make the data useful. Also, there is no such thing as a perfect statistic.

Klapisch: But here’s the kicker: Sabermetrics don’t acknowledge a phenomenon known as “clutch.” Untrue, though Klap isn’t the first to misstate the general sabermetric view of clutch. The idea is that it’s difficult, if not impossible, to quantify. It does make for good storytelling, though, so most staheads have backed off arguing the idea of clutch. If you think a particular player is clutch and another unclutch, fine. It is, after all, your own definition you’re applying to the players.